A couple of week ago I was contacted by the team at Instablogs, asking whether I would be interested in having a look at their site. I normally shy away from this kind of promotion, but I was rather intrigued by the premise of the service, so I did have a look, and had a bit of email to-and-fro with the PR manager.

In one sense, Instablogs is just another simple blogging platform. However, it combines the regular concept of blog posts with publishing short news 'clippings', encouraging users to aggregate and tag news stories for themselves. The site carries agency stories as well, and seems to be aiming for a 'sweet spot' where citizen journalism, news wires, and 'wisdom of crowds' bookmarking of stories provides a compelling news product.

Stories are divided into nine main topics, as well as by their geographic location. The service promotes 'Business' and 'Technology' as the two most prominent categories at the front of the list, but I got the impression that the content on the site veered more towards the 'Entertainment' and 'Politics and Society'. I'd be inclined to re-arrange that menu to more accurately reflect the content on the site.

When submitting news clippings, called 'Newslinks', users have to choose a category and a country location. One slight drawback here is that there is no scope for picking multiple geographical locations, so submitting a story about the name dispute between Greece and FYROM, one has to choose whether the story is about Greece or FYROM. Likewise, clippings about Madeleine McCann can only be about the United Kingdom or Portugal, not both.

Your own page lists the stories you have clipped or written. You can leave comments and vote for other people's stories, and, Digg-style, there is an 'upcoming' list of stories from each geographical region.

A 'live' feed is provided that allows you to monitor activity across the whole of the site. Fortunately, this can be divided into different types of activity, and you can restrict the range to activity around stories from a specific geographic region. Even at this stage the overall feed is a little overwhelming, and this way of presenting activity will not scale well with the site. 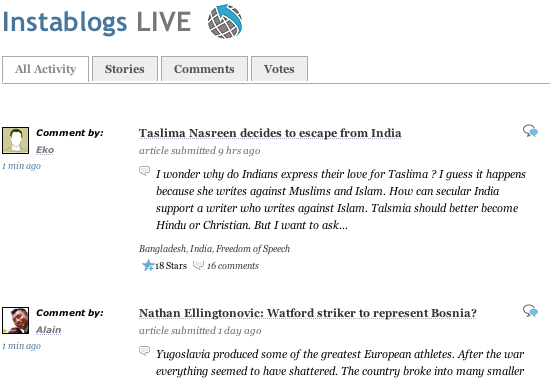 Another thing I found interesting about the service is that it is not a typically US-centric web 2.0 start-up. The bulk of the initial audience comes from India and southern Asia. 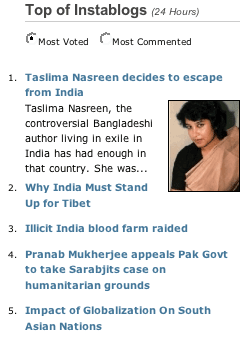 The site wasn't without errors, and I noticed a couple of typos during the registration process, which never engenders trust whilst you are asking someone to hand over their personal details. I was also a little concerned that if it gained any real traction, the site could become a honeypot for link spammers. The blogroll on your profile, for example, doesn't apply rel='nofollow' to the links it places on the site.

The site seems to be in a constant process of adding features. One of my initial gripes was that although there was an RSS feed for the site, there didn't seem to be individual RSS feeds. This has been rectified now, and they have also launched a Firefox extension that makes it easier for Firefox users to post newslinks. 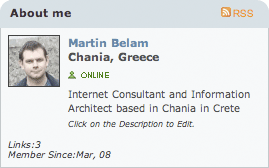 I was put a little in mind of Shane Richmond's explanation of why someone would want to blog on The Telegraph's platform - because they bring the newspaper's audience to them. Instablogs doesn't bring a huge coherent demographic like The Telegraph yet, but by focusing on the citizen journalist type of blogging, it does bring together a mini-blogosphere of news-minded people. It could also become a place for the mainstream media to browse for user-generated photographs and witness accounts of breaking news and events.

I felt particularly that there was an opportunity here to establish yourself as a niche aggregator of news stories across a range of outlets on a specific topic. For me, Greece would be the obvious example. I could put together quite easily a very good page on Instablogs just by clipping all the interesting stories about Greece that I read in the English-speaking Greek media, and the UK media, making a unique mix of both viewpoints. Although Instablogs still has the eternal problem of identifying Athens, Georgia as somehow being Hellenic.

I'm not sure how much I would continue to contribute to the service, to be honest, but it does seem to be a platform to keep an eye on.

I have followed Instablogs for a while and it seems to be pathetic. Stories are really boring and they follow the copy paste strategy which would really put off intelligent users. Other thing it should be named instaadsenseblog since i feel they dint come up with the idea of starting a blog network rather adsense made them come up with such idea. They want $3 million in funding but i dont feel anyone would like to waste their money on such junk blog. they fudge their traffic details and earning. they try to glorify things when its not the case. they hire fresh graduates who cant spell a word leave apart understand complexities of business and technology and when somebody tries to point out their pathetic business model they use their force of spammers for shutting their voice by counter commenting on it. To me its more of a spam blog network aimed at generating revenue thats it.what do you say martin?