The fact that the modern summer Olympics have generally been run in late summer means that there is a cluster of Olympic anniversaries in August. However, today is the 102nd anniversary of the opening of the 1906 games being held in Athens. These games are remarkable because they are no longer counted as 'official'.

Athens held the first modern Olympics in 1896, and also wanted to host the 1900 edition. Paris was offered this honour instead, but by way of compensation Athens was presented with the option of hosting an 'Intercalated' games series. The idea was that every four years the Olympic Games could go to an international host city, and in between, the 'Intercalated' games would return to Athens, also every four years. 1906 was the first time this was deemed practical to organise. With problems in Greece and Balkans, and the onset of the First World War, 1906 was the only time the 'Intercalated' games were held. The IOC has subsequently decided that although medals were awarded at the 1906 Athens games, they do not count for the purposes of the record books. 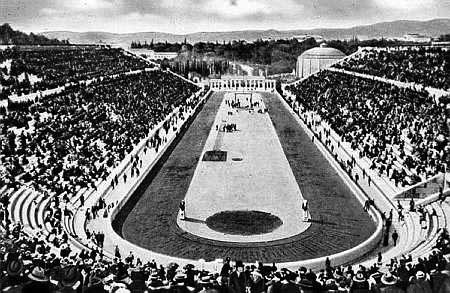 This seems a real shame as the 1906 Athens games seem to have more of a lasting legacy for the Olympic movement than the 1904 or 1908 games did. The 1904 St. Louis games were sparsely attended due to the costs of getting a team to the USA from many parts of the world, and the 1908 London games were spread across months and months of competition. The 1906 Athens games, however, had what we would recognise as a modern format, with competition condensed into a couple of weeks of action.

1906 also introduced a lot of Olympic traditions. The Opening Ceremony was a stand-alone event where athletes marched in as national teams for the first time, and the raising of the national flag during medal ceremonies was another innovation. France won the medal table, with the USA, Greece, the UK and Italy taking the other slots in the top five.

It is always entertaining to see the Greek / Turkey dispute put into a sporting context - a piece from a Greek-American on visiting an archivist's conference about the games states that 18 countries participated in 1906, whereas someone on Wikipedia has attributed a medal awarded to a team from Smyrna to the Ottoman Empire. This wasn't the only territorial dispute. It seems that at one medal ceremony Irish athlete Peter O'Connor objected to being placed in the UK team, and so himself scaled the flagpole to wave an Irish one.

The football tournament in 1906 was simply bizarre. It wasn't officially sanctioned, and featured a national team from Denmark, and teams from Athens, Thessaloniki, and Smyrna. The final, which Denmark were winning 9-0 against Athens, was abandoned at half-time after the Athens team refused to take the field for the second-half, presumably because of the pique to their pride. They also refused to take part in a play-off for the silver medal, and so Smyrna and Thessaloniki played-off for silver and bronze. The semi-finals were both played on the 23rd of April, and the final the following day. The medal play-off took place on the 25th.

Several members of the British Royal Family went to the games including the King and Queen, and the Princess of Wales at the time took some photographs. 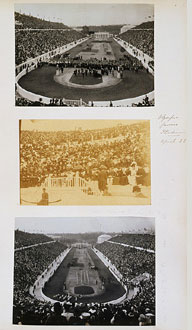 The 1906 games are no longer seen as official, or part of the 'Intercalcated' series. Instead the IOC portrays them as a special 10th anniversary edition of the games. What is interesting is that it seems that after the 1900 games were over-shadowed by a concurrent exhibition in Paris, and the same happened in 1904 in St. Louis, it was the 1906 games that showed the Olympic movement the way ahead.

Several of the distinctive new features of the 1906 games were incorporated into the London 1908 games, as we shall see...

Our family has a Smith & Wesson 1906 special edition single action 22 that was used in the firearms portion of these games. This is the history of the gun that has been in a safety deposit box for well over 60 years. I'm saddened to do research on the games to find out they didn't "count" all these years later.