Making the most of blog comments: Part 4 - Do people read comments via RSS?

I'm doing a series of posts about the way that people implement comments on blog sites. I started by looking at the methods that can be used to promote comments prominently to users, and then undertook a survey of 100 blogs to get a feel for which ways were popular.

I found, thanks in part to the growth of Wordpress as a platform, that distributing RSS feeds of comments was being increasingly used, either on a 'per blog' or 'per post' basis.

There are some advantages to this approach. It allows interested readers to get a fuller picture of the activity on a site, and RSS comment streams for each individual post means that a user can track any responses to their own comments quite easily.

However, there are some issues, not least of which is that RSS technology is understood and used by a fraction of the potential audience of a blog. Of course, if your blog is about the minutiae of RSS itself, then your audience will almost certainly understand what is going on. However for niche blogs writing about non-technical subjects, there is no guarantee that many of the audience will understand what they can do with the RSS feeds.

How often are RSS comment feeds read by the audience?

I wanted to try and find out how widespread subscriptions were to these types of feeds, so I performed searches on Bloglines and in Google Reader for the names of the blogs with this type of feed. These search results should, in theory, show all the URLs from that blog to which people publicly subscribe. As well as the main RSS feed, any public subscriptions to comment feeds should appear. I found the results for uptake of subscription to comments feeds to be very low.

The majority of the blogs I looked at did not have any of their comments feeds indexed or any subscribers in Bloglines. Exceptions included James Cridland, Martin Moore Blog, Martin Stabe, Mediawatch Watch, Mercury Rising, No Rock And Roll Fun and the Open Rights Group. All of these had one or two of their comment feeds listed, though not always with any current subscribers.

Similarly, there are 200 feeds listed by Bloglines when you search for 'Engadget'. These include feeds for specific categories and topics. Amongst the 200, just 9 of the feeds were to comment threads. 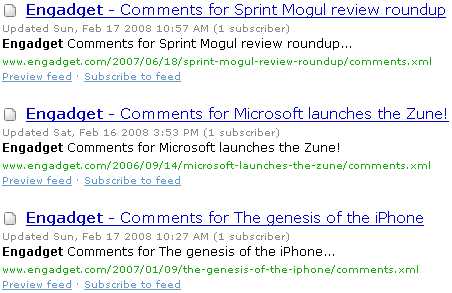 Bizarrely, given the search heritage of the parent Google brand, I find the search on Google Reader, when looking for feeds, to be inferior to that on Bloglines. Nevertheless, from the information I could gather, the picture seemed similar.

Very few of the smaller blogs registered any subscribers for their comment feeds, and the numbers were low for very popular so-called 'A-list' sites. TechCrunch, for example, has over 200,000 subscribers in Google Reader, yet, by comparison, the comment feed has just 85.

There is a hint as to why comment RSS feeds may not be proving so popular in the numbers provided by Google Reader. It estimates that Arrington and co. at TechCrunch churn out over 80 posts a week on average. The people commenting on the site dwarf that number though - over 1,000 comments a week according to Google's numbers - a lot for even the most committed fan of a site to keep up with via RSS.

Not all blog platforms are created equal, and by default Movable Type produces less RSS output than Wordpress. Although we've seen that usage figures seem low, tomorrow I'll be explaining how to add a 'recent comments' RSS feed to your Movable Type blog.

Seriosly! U need a makeover