The ripples of the Zahopoulos scandal reach The Times

I mentioned last week the Zahopoulos scandal - or Maximougate as people keep calling it here. There have been fresh developments in Greece daily. Last weekend a Sunday paper published some still images from the sex DVD that allegedly features the Culture Mininstry official Christos Zahopoulus, who tried to commit suicide before Christmas.

Now, the two owners of the paper in question - Proto Thema - have fallen out over allegations that one of them was promised that, if the paper dropped the story, the government would make sure that an investigation into financial irregularities at the paper would also be dropped.

And in the middle of that, John Carr of The Times has got himself dragged into it. On January 9th, The Times ran his piece about the scandal - Sex, lies and DVDs shake culture ministry in Greece [1] - where Carr implied that the fact that the Greek Culture Minsitry seemed beset with sex and corruption undermined the argument for the return of the bits of the Parthenon currently residing in Bloomsbury. 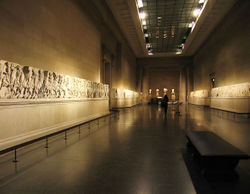 "It began as a tale of sex, lies and a secret video recording at the heart of the ministry charged with bringing the Elgin Marbles back to Greece.

But after two apparent suicide attempts and allegations of blackmail and endemic corruption, the affair has called into question the moral authority of the Culture Ministry as it presses its case for the return of the ancient masterpieces.

The scandal has sent the popularity of the conservative Government to record lows and has dented the prestige of the Culture Ministry. Mr Zachopoulos was a key official in the campaign for the return of the Elgin Marbles, and there is a widespread sense of shame that the organisation claiming the moral high ground for their return should be racked by scandal".

It excited some pretty fierce comments directly on the website of The Times:

"Return the marbles to their rightful homeland. The brits are known for their own 'extramarital' affairs and they even crowned that hussy that broke up the royal home----" - cleopatra, Las Vegas, NV

"Ha ha ha ha, a sex scandal is a reason for which the STOLEN Marbles should not be returned to their HOME country? And it's coming from the birthplace of morality, Britain!!! Indeed, British humor is like no other" - Vrasidas Komninos, Athens, Greece

"Sir, you are absolutely right when you questions the moral high ground of the particular former Greek beaurocrat. However, you would appear less hypocritical if you had supplied a good explanation why your country is holding on to stolen propertty for more or less two centuries. As for government scandals you made me laugh as I said to myself: Look who is talking. Do you remember Kristen Keller?" - Dr. Tom Papadopoulos, Windsor, Ontario, Canada

Carr's piece did not go unnoticed in the Greek press either, and the January 11th edition of the Athens News carried this in George Gilson's weekly round-up of the stories that have been exciting the newspapers:

"The scandal surrounding sacked culture ministry official Christos Zahopoulos continued to preoccupy the Greek press, with opposition parties and newspapers using it as a potent ramming rod against the government. But the reporting of the once-venerable Times of London stirred almost as much press ire as the scandal itself. The paper's Athens correspondent declared that the scandal 'called into question the moral authority of the culture ministry as it presses its case for the return of the ancient masterpieces'. Of course, Greeks believe it is the entire Greek nation that has the moral authority of a people whose patrimony was expropriated (most would say stolen) when they were under foreign occupation. From the Greek point of view, two centuries after one of the greatest monuments of Western Civilisation was mauled and hacked apart by a Briton, it is the Parthenon itself that cries out to be reunified".

Carr has responded with a letter to the Athens News this week. And he has not minced his words:

George Gilson devotes quite a slab of his Press watch of January 11 to taking me and the newspaper I represent to task for connecting the apparently bottomless can of worms of the Zahopoulos scandal to the Greek demand for the return of the Elgin Marbles. His unstated question is: What has the one to do with the other?

Oh, but a great deal. The call for the Marbles' return is not a legal issue but an ethical one. The British Museum breaks no law and violates no international treaty in hanging on to the Marbles, which were acquired fully in accordance with the administrative rules of the Ottoman Empire, which was the legitimate authority of the Balkans at the time. (Greece was not "under the occupation of" the Ottoman Empire as Mr Gilson would have it; it was the Ottoman Empire. There was no Greek "state-in-exile" claiming legitimacy, as there was in World War II, ergo the "occupation" argument does not hold. The sultan, as owner of the Acropolis and what was on it, could do what he liked with them, as he did.)

What remains is the Greeks' ethical argument, which is quite legitimate and worked for selflessly by a great many people. Yet lacking a legal leg to stand on, it is based completely on a woolly appeal to the noble sentiments of the British Museum and by extension to the British government and people. Now if you are a culture ministry and if you're going to appeal to someone's noble side, should you not be noble yourself, instead of - in the Greek media's portrait - something resembling a den of sexually-perverted thieves?

Ding! Ding! Seconds out! I look forward to reading Round 3 next week!

[1] This also seems to be one of those legal cases that the British press only care about when it involves pictures of Diana in a car crash being published in Italy. The Times has quite happily published on the web a picture of Evdokia Tzekou, the woman currently in custody and apparently on the DVD with Zahopoulos. The page can be viewed in Greece. I'd not actually seen her picture before, as it seems the domestic media here are obliged to keep her image under-wraps, presumably for legal reasons. [Return to article]

Read other recent posts about: Greece, The Times

The story continues in the letters page the next week...

Well, the Espresso newspaper managed to get away with showing her picture it seems.