BBC Director-General Mark Thompson did an online question and answer session with The Telegraph newspaper yesterday. I can't, off the top of my head, think of a more potentially hostile environment for him, except perhaps the bits of the BBC in White City and Bristol that used to make Factual programming.

Actually, those BBC staff appeared to be joining in the debate anyway - this proposed question caught my eye:

"Why is the BBC clinging onto minority channels such as BBC3, BBC4 and News24, whilst reducing staff in other areas which produce TV for the core audience? In BBC Bristol's Factual and NHU departments, which have been specifically targetted during the latest round of redundancies, 1/3 of the jobs are being lost".

The Director-General is clearly on a bit of a publicity drive at the moment, armed with an impressive set of PowerPoint slides which suggest that, rather than the air of depair at the BBC's output and very existence that pervades the user-generated areas of The Telegraph (and the likes of Biased BBC), the Great British Public are on the whole fairly OK with the BBC at the moment. 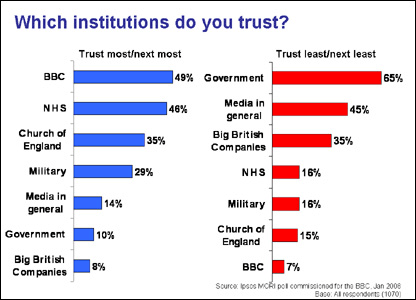 Of course, I suspect this is a survey where the softening up questions revolve around whether 'Strictly Come Dancing' is good wholesome family entertainment that Nan watches, and 'Do your children enjoy Doctor Who?', rather than a survey which opens up by asking people what they think of the Jonathan Ross salary and kitten naming issues.

In the end I thought Thompson got a reasonably easy ride with the questions actually put to him by The Telegraph - although I'm sure the person handling his inbox will be delighted that he invited people to personally contact him about an accusation of anti-semitic content on the BBC website.

A few highlights from the coverage for me:

My favourite misconception - "Apparently, seventy-five percent of the BBC's funding comes from the Licencing Fee (a proportion of this is now redirected to Channel Four)" - that will be news to Andy Duncan

The question I most wish they had put to Mark - "Oh yes, and what do you think of Telegraph TV?" - I'd have liked to hear what he thinks about newspapers producing video content, and the regulation issues around that.

And The Telegraph also had the ever-present perils of moderating conspiracy theorists of all persuasions:

Why has The Telegraph SEVERELY censored my 8.20pm posting regarding Common Purpose? I urged readers to go on the net and look them up. Adding the word "conspiracy" on Google throws up a very interesting video of a talk in Leicester. I find it deeply scary ... and if The Telegraph (of all organs) is censoring, then what the hell is going on?

But what I liked most about the page though was the picture. The BBC is often accused by detractors of deliberately using fantastic soft-focus shots of Labour politicians on the web, whilst trying to use the worst possible photographs of Conservative politicians, to surreptitiously bias political debate in the UK. 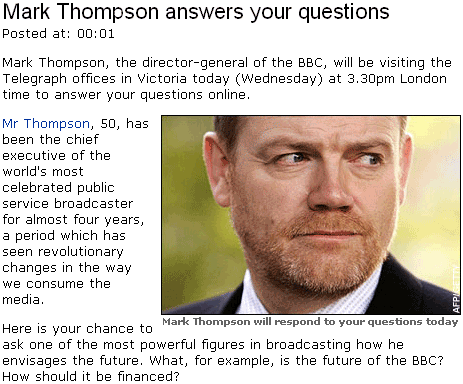 I tell you what, if there is a publicity photo of Mark Thompson looking any shiftier than that, I'd love to see it. Mind you, it's not as bad as when The Telegraph had him posed in gun-sights I guess!

To be fair, the BBC has had to cough up £14m of the licence fee *does* to pay C4's digital switchover costs.

I stand corrected. I knew I should have gone with the person claiming the Licence Fee was paying for the World Service Arabic TV channel, or the more simple question "why does the BBC hate the Chinese?"

What a soft ride he had, and why did no person question his so called findings on confidence?

Well, actually he only invited me (the original complainant) to contact him, which I have done!

Hi Paul - yes I saw that Thompson's comment was personally addressed to you, but I just kind of have the feeling that maybe a couple people more than yourself will use it, having seen it published so prominently in The Telegraph! I mean, it isn't exactly hard to guess his address, but you seldom see people in his kind of position giving out an address that isn't 'please email newswatch@bbc.co.uk or complaints@bbc.co.uk' and leaving it to the minions to answer.

Incidentally I did a bit of hunting around looking for the content you referred to and couldn't track it down - have you blogged about it anywhere? If not, I'm sure if you popped over to Biased BBC and mailed the team there, they'd be interested in following up the story. Allegations of anti-semitism in BBC output are, quite rightly, one of their hot topics.

The phrase may be seen in the penultimate paragraph here:

"... Now his polemical, knockabout, style has ruffled feathers in the US, where the Jewish question is notoriously sensitive. "

This is a profile of Tom Paulin. The sentence quoted are not Tom P's opinions, but BBC editorial. As I wrote in the 'Telegraph', I do not think that I have ever seen the phrase "Jewish Question" applied to the Jewish community of the USA, except here by the BBC. (There may be a neo-Nazi website somewhere that does the same, but, truthfully, I don't read them .....). The expression "Jewish Question", first coined by C19 antisemites, and then enthusiastically adopted by the Nazis, suggests that the very existence of Jews - in and of itself - is a "Question" that demands a solution.

I did not, and have not, shared any of this with any other websites, as I really had no interest in making it a cause celebre. But the totally off-hand response received (eventually, and after a lot of prompting) from the Newdesk) really ticked me off. And, I agree, that Mr. Thompson may well be inviting a lot of email - not just from me!