I've been reviewing the websites of Europe's leading English language 24/7 news channels, looking for the kinds of Web 2.0 features like blogging, social bookmarking, and RSS feeds that they offer. So far I've looked at Al Jazeera, the BBC, CNN and Euronews.

Today I'm turning my attention to France 24. This state-funded station opened in 2006, and is intended to provide a French antidote to the perception that the news agenda is dominated by the priorities of the UK and the US, although recent stories suggest it may be cutting back to no longer do this in English. 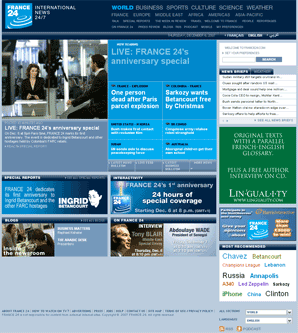 The France 24 website is published in French, English and Arabic editions.

France 24 features two interesting sections in their right-hand navigation. The first is offering a series of France 24 chicklets and banners. There is a wealth of them available from the 'Goodies' page to enable users to embed graphical links to the service within their own sites.

A rather more Web 2.0 feature in the right-hand navigation is a tag cloud of 'Most Recommended'. Clicking these leads to a search results page for the term in question. 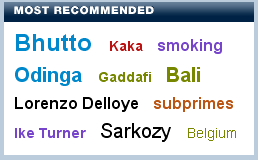 One thing that I found really annoying about the site was the way the navigation worked on the homepage. If you click the headlines of one of the secondary stories in the main content panel, you are not taken to that story. Instead, the image and synopsis of that story appears as the main story. It is then a further click in order to be able to read it or play the video. This seems to be putting a totally unnecessary barrier in the way of getting to the details of the news.

The main France 24 RSS feed is auto-discoverable from the English language homepage, and an RSS icon at the foot of the page promotes the feeds alongside the site's podcasts. 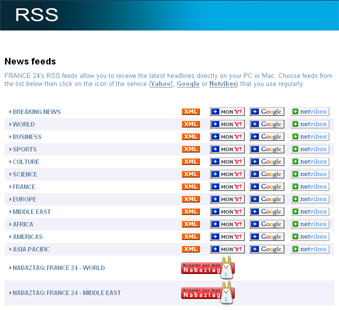 France 24 currently has a roster of 5 English language blogs, which are promoted from a panel on the homepage.

Stanislas Leridon's "Webvolution" looked to be the pick of the bunch, but his inner blogger appears to have dried up in July last year. In fact, of the 5 blogs, only the business blog had been updated since the end of November. The French language blogs were not much fresher, with most of them not having had posts since November or October.

Each blog does have an individual RSS feed for when they are eventually updated, and some of them feature a graphical blog roll which features a picture of each blogger being linked to. 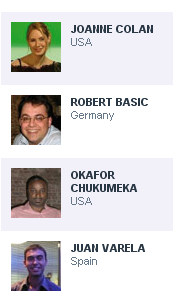 User's are able to comment directly on some stories. The interaction is slightly odd. At the bottom of the page France 24 invite the reader to 'REACT'.

There are no reactions so far.
Be the first user to react to this article.
You will only have to select the button <<REACT>> and fill the indicated fields.

However, the word 'REACT' is not a link, and so in order to leave a comment the user has to scroll back up the page to find a graphical icon, which opens up a pop-up form. 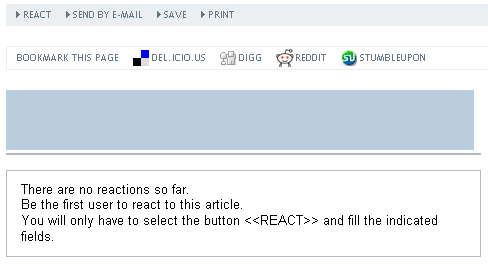 There does not seem to be any user voting on the English language France 24 site.

France 24 include links to del.icio.us, Digg, Reddit and StumbleUpon at the foot of each story page on the English language edition. These are also included on the French edition, but not on the Arabic version of the site.

In the next part of this series, I'll be continuing with a look at a news service that no longer has its own dedicated 24/7 channel - ITN.

A great series, thanks!

I tend to disagree about the extra click to get to a story though – the France 24 method allows you decide if you want to go for the video, or just read it.

That works great for me at work, usually using Firefox that I can't install flash on. If I want the video, I'll have to open it in ie – and the France 24 website gives me the option to that while still making the page look better. I'd feel excluded if clicking a story just gave me a big empty placeholder or something.

Great series of articles, I look forward to the remainder!