I'm doing a series of posts looking at the Web 2.0 aspects of the websites run by the 24/7 TV news channels that are widely available in Europe and particularly in the UK. Yesterday I started with a look at the English language edition of the Al Jazeera site, today I want to turn my attention to the BBC. 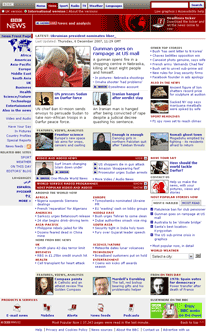 The first thing to note is that, speaking from experience, within the BBC it all makes perfect sense, but the branding of the BBC News site is very confusing for the user. For UK users, the BBC's rolling news channel is BBC News 24, whilst international users are used to getting their BBC take on the world's events from BBC World. On the web, users are asked to choose between an international or domestic 'edition' of the BBC News site, but the BBC News 24 and BBC World brandings are conspicuous by their absence. The bbcworld.com URL leads to a separate news-lite site for the channel, and BBC News 24 is classified as a 'programme'.

Another thing that immediately strikes you as odd when comparing the BBC to the other sites in this study, is that the BBC is the only website where 'Sport' is a site in its own right, rather than a topical sub-section of 'News'.

This is a classic example of organising your website around the structure of your business, rather than a structure that makes sense to your users. The division seems even more artificial now that internally the BBC has amalgamated news, sport and weather into one department, whilst on the web they remain as three very distinct destinations for users.

The BBC News site offers a wide range of RSS feeds, which are promoted in the left-hand navigation on the homepage, and the main index feed is auto-discoverable. The BBC uses a graphical RSS icon, and labels them 'News feeds'.

The BBC News homepage also carries a further promotion for RSS feeds in a banner at the footer of the page, using a non-standard icon.

On individual story pages, a contextual RSS feed is promoted in the right-hand navigation in a similar way.

The BBC's RSS help page has been praised as one of the clearer explanations by a broadcaster of RSS functionality. However, there doesn't seem to be any comprehensive list of BBC News RSS feeds anywhere on the site. The help page lists just 19 of the multitude of BBC RSS feeds available.

The BBC News site does run a few blogs written by high profile correspondents like Nick Robinson or Mark Mardell, but it would be hard to tell that from the homepage. Whilst their content sometimes features in the promo slots, there is no specific navigational link to 'blogs'. The only permanent text-link to blog content is to the "Editor's Blog". This is listed as a related BBC site, rather than something that is directly part of the BBC's news output.

BBC News do not seem to have a page aggregating their news blog output. http://news.bbc.co.uk/blogs returns a 404 error, and http://www.bbc.co.uk/blogs mixes in a whole host of non-news blog content. The BBC's blog network currently lists 12 blogs under the news category, but they are not easy to navigate to from the news homepage.

The blogs themselves allow user comments, and can feature blogrolls, del.icio.us link streams, and date-based calendar navigation. Entries do not seem to be classified by categories or tagging, but on a per author basis.

The BBC does not allow users to comment directly on news articles, although, like Al Jazeera, it does sometimes bring 'pull quotes' from the message boards into stories.

The BBC also solicits eyewitness accounts at the foot of some stories - not always with the best choice of phrase. 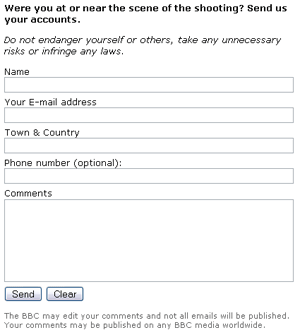 The main interactivity on the BBC News site lives under the 'Have Your Say' area of the website. This has editorially led topics, and users can leave comments and 'recommend' comments by other users.

Confusingly, since the coverage of sporting news is hived off to a separate site, the interaction model for sporting topics is not the same. Instead of the 'Have Your Say' system there is the entirely different '606'.

The BBC site does not feature a vote on the front page. Votes are sometimes embedded into story pages, and there is usually a daily vote tucked away on the 'Have Your Say' homepage. 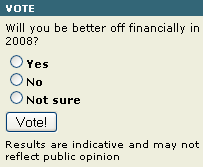 Like the BBC's blog pages, individual stories feature social bookmarking links for del.icio.us, Digg, Facebook, Reddit and StumbleUpon. There is also a link to a help page explaining their function.

Tomorrow I'll be continuing this series with a look at the first 24/7 news operation to hit the web, CNN.

Maybe it's just years of reading the BBC News website, but having Sport as a separate site makes perfect sense to me - I don't want sports news clogging up my main news. Maybe that's just me though.

I'm pretty sure that the evidence of every other news site where sport is a sub-category suggests it is just you ;-)