The English language version of Al Jazeera was launched towards the close of 2006, as one of a flurry of recent new 24 hour news services that includes 2005's Russia Today, 2006's France 24, and the BBC's forthcoming Arabic TV service. The website side of the operations did not have a smooth launch. It took a few weeks until it was available regularly enough for me to be able to review it at the time, and I'm given to understand that Al Jazeera has had to change hosting companies several times in the 14 or so months since launch.

One aspect that I originally found quite curious about the Al Jazeera website was that by default it served the user a version built using Flash rather than HTML. This would have been understandable if the site made a great deal of use of embedded streaming Flash video, but that doesn't seem to have been the case. The choice appears to have been removed now, and the page is mostly HTML with some Flash elements.

The English edition of the Al Jazeera website offers an RSS feed of the main index. This is promoted with an orange RSS oblong logo in the site's left-hand navigation.

However, the main feed on the homepage is not auto-discoverable by a browser. The RSS logo only appears on the homepage and section index pages, and not on story pages within the site. Each index area appears to have its own RSS feed, but there doesn't seem to be any RSS help page, or overview of the available feeds. 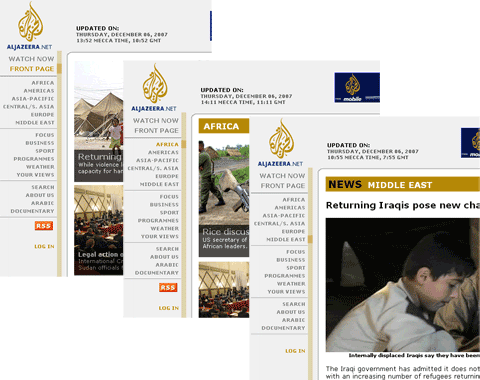 The Al Jazeera site in English does not appear to have any blogs, carry any interactive voting, or feature any social bookmarking links.

The Arabic language version of the Al Jazeera site does appear to have a vote on the homepage - but my Arabic doesn't extend beyond reading numbers, so I'm not 100% sure to be honest.

Comments cannot be added by users directly to stories. Al Jazeera's English language message boards are held together under a section called 'Your Views'. The site does, though, sometimes include "pull quotes" from their message boards within story pages.

It may just be a personal preference, but I found the 'blurbs' inviting users to contribute to be rather lengthy and wordy, and not terribly engaging, for example:

"Advocacy groups and politicians have highlighted local resource crises as the reason for a host of armed conflicts. But is that true? Not according to a new study from the Norwegian University of Science and Technology (www.ntnu.no). It looked at environmental pressures in 150 countries from 1961-'99. Its conclusion — lands where resources are heavily exploited show a clear connection to a lack of armed conflict. What do you think?"

Al Jazeera posts the house rules for their message boards very clearly in the right-hand navigation of the page, rather than having them on a separate page that is linked to from the message board. The rules are fairly simple and cover the major moderation bases. Al Jazeera rejects messages which:

1. Are obscene or abusive
2. Make racist, sexist or homophobic comments or personal attacks on other users of the Your Views page
3. Break the law, or encourage others to do so, or are defamatory in breach of copyright or in contempt of court
4. Include personal details of any kind, such as phone numbers, email address or bank details
5. Are clearly advertising something for profit
6. Are impersonating someone else
7. Are irrelevant to the topic being discussed or are being repeatedly posted

There doesn't seem to be any direct way, though, to reach the moderators or those running the message board if you want to complain about something that you feel has slipped through moderation by mistake. There are no 'alert a moderator' or 'complain about this post' buttons on the page for users.

Tomorrow, since I'm looking at the sites in alphabetical order, I'll be looking at the news site that I am most familiar with - the one belonging to the BBC.

Most videos are there, poorly SEO'd (views average a few hundreds each), but all are commentable/embeddable.

While YouTube may not be the most appropriate platform for an outlet that aims at 'setting the news agenda' (comments rarely go beyond, well, Youtube comments), AlJazeera experiments where many refuse to go.

Well done AJ, you are really one of the only news broadcasters that really get the stories warts and all and this is the only way to see it as you then get the news not a biased political view
Well done

be it clear that I am not a jew but people in Gaza must understand that they voted for Hamas, an organization which wants to eliminate Israel. So why are they complaining if Israel is eliminating them??
What's all the fuss the whole world is doing??
cris

People learn from their mistakes not continue them. Why is it that Muslims are 'terrorist' when they fight for their right and Americans and Jews are not? The way to peace is to talk and act on solutions and not have double standards. America should make peace with the Middle East and they will see the difference. Blood is on their hands
Don't take my word for it, try it.