Blogging at the BBC: Part 8 - Guidelines

This week I've been looking at what it was like to blog from within the BBC's great firewall of Shepherd's Bush. I started blogging in December 2002, and frequently wrote about my work at the BBC when I was a full-time employee there. I wasn't alone in this, and so after some time, the BBC began to formulate some guidelines about staff blogging.

The guidelines were formed in a very collaborative process guided by Nick Reynolds, then at Editorial Policy, now editor of the BBC's Internet Blog. As part of the process Nick held a workshop in the Digilab, situated in the heart of the underworld of Television Centre, and there was wiki on the BBC intranet where people could contribute to the shaping of the guidelines.

I was, to be honest, rather taken aback at the workshop at how difficult some staff found to be open about their blogging. Attitude to staff blogs varied greatly between departments. I was very lucky that the central New Media department where I worked was probably the one place above all within the BBC where tacit encouragement was given to blogging about work. However, it was clear that some people were very afraid of their managers finding out that they had a blog.

One important aspect of discussion that came out of the guidelines was that staff posting internally were asked to consider that whatever they wrote might get into the public domain.

A classic example of this hit the BBC when Richard Sambrook was writing about the BBC's last-but-one 'Value For Money' cost-saving programme. On a blog post Sambrook used the word 'negotiation' in reference to discussions with the broadcasting unions, when at the time the BBC management party line was 'no negotiation'. The slip was seized upon by the unions as evidence of a split within BBC management ranks over the approach, and the contents of the blog post made it into the national press.

This alone, it seems to me, made treating both internal and external blogs as if they might be read externally a common sense approach, and certainly it was no longer inconceivable that the press might lift comments from a blog written by a member of BBC staff, and use it as 'A BBC insider say...'.

The risk, thanks to the echo chamber effect of blogging, also seems to have been passed further down the BBC food chain. Hitherto the biggest threat of a PR disaster to an organisation like the BBC was either a scandal enveloping senior management (like the investigation into Alan Yentob's murky expenses) or on-air talent going 'off message', for example Rik Mayall's inaccurately reported rant that to get on TV these days at the BBC you had to be a black one-legged lesbian.

With the advent of staff blogging there is a new risk that any member of BBC staff might suddenly find themselves in the media spotlight, being accused of bringing the corporation into disrepute. Ben Metcalfe, for example, was involved in a 'blog-storm' following a very public spat between him and Mena Trott at a conference, and suddenly his name was in the top ten popular searches of Technorati, next to Jennifer Anniston. Knowing Ben, and having seen the video of the exchange between him and Mena, I think he shrugged it off and came out of it well, but it does raise a wider issue for organisations like the BBC.

I think, to be honest, that monitoring the right blogs should give a tech-savvy journalist relatively easy stories to write. I know of a couple of obscure blogs by people in prominent public bodies that would be absolute journalist gold-dust, because the bloggers don't seem to be exercising much common sense in the details they are posting about their organisation. I also think an Evening Standard writer armed with an RSS aggregator and the feeds of the many London Underground staff who blog, could probably turn up an exclusive about the Underground every couple of weeks, just by following the clues and leads contained in the blogs.

However, I don't think that this problem is something unique with blogging, and I feel that perhaps the concerns had been over-stated at the BBC about this 'new' risk.

Certainly I recall that when I first started at the BBC, one of my jobs was to answer the feedback emails received via our search service. It was quite clear then that anything you sent out with bbc.co.uk at the end of the email address could be potentially quoted as 'The BBC says...'.

As sometimes happened to me, if someone was unhappy with my reply it could quickly escalate into a series of emails pinging through cyberspace, gleefully being carbon-copied by the complainant to Ashley Highfield, Jenny Abramsky, all sorts of newspapers, journalists, MPs and Lords.

And, as I pointed out in one of my recent guest articles on the BBC's Internet Blog - it only takes a couple of people to post negative messages on the BBC's Points Of View board, and this magically transforms into a 'flurry of complaints' and the excuse to run again and again and again pictures of Emily Maitlis <quote>flashing<unquote> her legs or falling out of her dress. 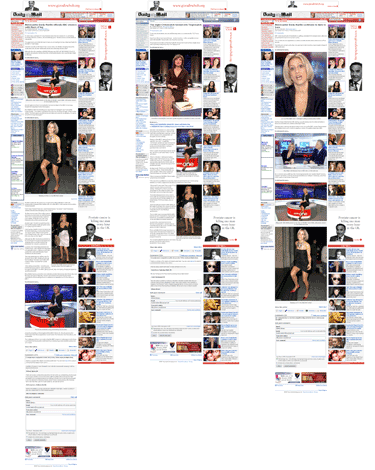 On the whole I think the BBC strikes a reasonable balance in the blogging guidelines, although they are still a little heavy on preemptively asking your manager whether it is OK to do something. They also don't particularly cover well the situation of how to deal with an established blogger who joins the BBC, or whether there is a code of conduct expected after someone leaves the BBC.

My main concern though, is to do with how transparent blogging at the BBC is. Or rather, sometimes isn't. The BBC has a whole raft of internal blogs, written, according to the spirit of the guidelines, as if they might be quoted for public consumption outside of the BBC. If that is the case, then why not open them up so people can read them?

Tomorrow, in the last part of this series, I'll be looking at how the BBC News relationship with the blogging medium became formalised.

Good stuff Martin. I will respond with a blog post when I get time!

If that is the case, then why not open them up so people can read them?

Do you know the answer to this? Will we find out in part 9 or it it just the way it is?

>> Do you know the answer to this?

Well, I expect that some people, for a start, are more comfortable blogging internally, rather than knowing the world-at-large could read them.

There is also a resources issue - if you open them to the public then you need someone to moderate the comments more closely than you would for an intranet blog.

Plus, within the BBC's intranet, pretty much anyone can have a blog on any topic - if it is for public consumption you might be more cautious about what you would approve.

Personally, I'd favour making chunks of the BBC's intranet open as a 'public extranet'. The news stories in Ariel can pretty much be read by anyone on the Central Line on a Tuesday and you can subscribe to it from outside the BBC to get the job adverts, so I don't really see why the online version should be behind the firewall. All of the technical and editorial standards and guidelines are already on the public web anyway, and so perhaps bloggers could choose if they were published externally.

One thing I note from the published 'official' BBC blogs is that whilst radio and new media have taken to them, you see very little 'behind-the-scenes' blogging from TV. When they do behind-the-scenes stuff it tends to be in the form of video diaries. I can't be bothered with that - bandwidth issues here in Greece - but it might be interesting to get a blogging view of costume design or wardrobe or set dressing or TV scheduling or commissioning...?

Here (late) are my thoughts inspired by this post.