Yesterday I started recounting a recent ghost walk of our own devising which my wife and I did in Cambridge. A lot of the source material comes from Geoff Yeates book "Cambridge College Ghosts", although the internet provided us with some extra stories.

The fourth Cambridge college on our journey was Jesus College. It is a little way out from the main shopping centre of town, and as such is much more peaceful. We found a bench to sit on within the college grounds, and I began to read the tale as it is presented in the Yeates book. 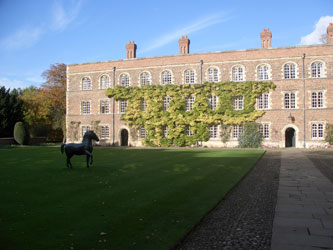 Unfortunately, he chose to reproduce in its entirety a story from Arthur Gray's 1919 publication "Tedious brief tales of Granta and Gramarye", a collection of ghostly stories about the college. The chosen tale was "The Everlasting Club", and it certainly fitted the tedious bit of Gray's description.

Seven fellows at Jesus founded a society called "The Everlasting Club" and swore to meet for a celebration on the same day every year, corporeally or incorporeally, unless four of them had met a couple of weeks previously to cancel the meeting.

Suffice it to say that the first time an incorporeal member pitched up, he caused an absent member of the seven to die the next day, and the remaining five faithfully met every year to cancel the proceedings to avoid having the dead gate-crash the party again.

That worked fine until, with a couple of deaths, they could no longer summon the quorum of four required to cancel the party. The fear of the forthcoming evening caused all but one of the remaining members to die before it next came around, leaving one sole corporeal member, Charles Bellasis, to host a party for his six dead friends.

There was an additional note - 'Mulctatus per Presidentum propter neglectum obsonii, Car. Bellasis' which translates as 'Punished by the President for neglecting the victuals, Charles Bellasis'.

Well, I don't know about my wife, but by the time I was halfway through reading the 1919 version of this tale I was losing the will to be corporeal myself. In a nutshell, the plot sounds like source material for a Mark Gatiss novel or Doctor Who story, full of posh nobs, pomp, very long words and sinister death, and it took about 20 minutes to read.

The rooms that used to belong to Bellasis are supposed to have remained unoccupied ever since.

Sidney Sussex College was our next port of call, the location of some reported paranormal activity that took place in the 1960s. Students were haunted by the apparitions of disembodied faces without ears, and by the appearance of glowing eyes. The visions were accompanied by a rank smell, said to resemble rotting meat, Spam and Oxo.

Which seems a bit harsh on the makers of Spam and Oxo to be honest.

The ghost is thought to have been either that of William Prynne, who lost his ears in the nearby Cambridge pillory, or Oliver Cromwell, who attended Sidney Sussex on his way to overthrowing the monarchy. Cromwell was exhumed and posthumously hanged by the restored monarch for the temerity of it all, and his head was placed on display in London for some time. Eventually, as recently as 50 years ago, it passed to Sidney Sussex, and is now buried in their chapel. 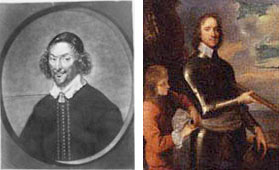 After a quick detour into a Lakeland store to check out their Christmas goods and gadgets, we made our way to the sixth college of our trip, Christ's College. 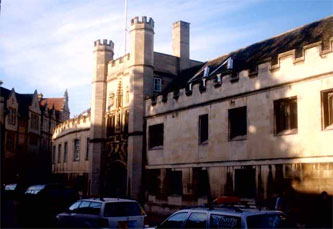 This college is the setting for a very sad ghost story about Christopher Round, which was published in 1918 by A.P. Baker in a book called "A College Mystery".

All his adult life, Round had come off second best in an academic rivalry with Philip Collier. Although he worked hard, he never came first. However, his nemesis travelled away, and whilst he was out of the picture, Round fell in love with a widow called Lady Mary Clifford.

As fate would have it, the widow had also met Round's rival on her travels. When Collier returned to Cambridge it eventually transpired that rather than Round having a chance to propose to the lady himself, a relationship was blossoming between his fierce academic rival and his love.

Round though, spotted a weakness in his rival. He appeared to be coming back to the college drunk and delirious. One night Round observed him staggering around the grounds and falling into the swimming pool. At first he moved to help Collier, but then, consumed by rage that this drunkard had stolen his academic glory and his woman, he struck him a blow on the head whilst he was in the water, ensuring that he drowned.

However, it turned out that Collier wasn't a drunk, but had in fact been the willing participant in clandestine trials of anaesthesia, with the express purpose of finding a way that the widow they both loved could be treated for her terminal medical condition. With Collier's death all hope for Lady Mary Clifford was extinguished, and she died in due course.

Round never forgave himself. His part in Collier's death was not suspected, but he confessed in a 'Record' he left behind after his own demise. His melancholy ghost can be seen today repeatedly wandering the grounds where he committed the crime, having unjustly thought his rival a drunkard, and unwittingly ended the hopes of survival of the woman he loved. 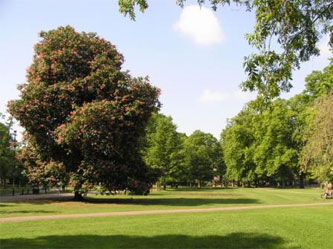 It is a great story - but sadly for historical accuracy, it seems that none of the main protagonists ever actually attended Christ's....

The final stop on our main walk was Emmanuel College. This has some of the most beautiful grounds of all the colleges we popped into, and with the sun coming out we really enjoyed the peaceful surroundings as I told the ghost tale that had unfolded in the late 1800s. 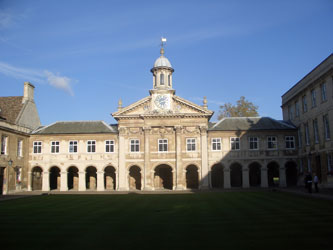 The original Emmanuel House no longer exists, and the haunting seems to have stopped with the demolishing of that building, but in 1885 a thorough investigation of the phenomena was carried out by a Mrs Eleanor Sidgwick of Newnham College, on behalf of the Society for Psychical Research.

On several occasions, visitors or residents of the house had heard or seen the same thing. The haunting either consisted of an invisible person walking down the hall and downstairs making a heavy footstep sound, or the sight of a veiled woman. On one occasion the veiled woman was observed coming down the stairs which had been the origin of the noise, and going into the dining room. On another occasions, a resident was repeatedly disturbed whilst in the same dining room by footsteps coming down the stairs and approaching the door, only to find there was nobody there.

What makes the stories seem more credible is that the occurrences were all a few years apart, and it is claimed that none of the witnesses to the phenomena had any prior knowledge of the reported haunting. It is alleged, therefore, that each of them reported similar experiences without knowing that they were not unique.

Our final ghostly stop was much later in the day. After some late lunch we set off to see Idlewild play at The Junction. Along the way we went by the BBC Cambridgeshire building, which claims to have a haunted studio. A lecherous spirit has been accused of 'touching up' female members of staff. From my time at the BBC, I recall there seemed to be some kind of rule, regulation, and strictly union-sanctioned disciplinary procedure for every conceivable kind of misdemeanour - although I'm unclear if this applies beyond the grave.

I had just, in fact, been doing some contract work at the BBC, and had a BBC ID card with me, however, we neither had the time or the chutzpah to blag our way into the building. However, there is a webcam permanently pointed at the haunted studio on the BBC Cambridgeshire web site. 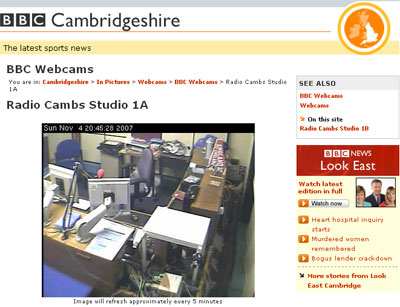 So, that was the end of haunted tour of Cambridge. We took in seven colleges and three other locations, but I also found plenty of other ghost stories about the area that we didn't have time to visit the locations of. These included the hammock swinging spectral woman of Montague Road, the grey lady of Girton College, a different grey lady of Abbey Road, and the penguin that haunts New Market Road.

Yes, I did say penguin. Make of that what you will.

If you want to visit the locations yourself, it is quite a straightforward route, and you can also find plenty of professionally run ghost walks around the area as well. 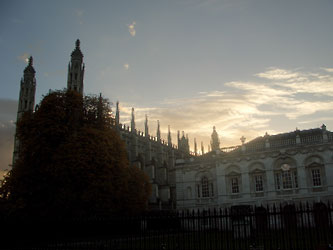