Last week I published a list of the Top 100 British newspaper RSS feeds - well, according to the subscription numbers given by Google Reader, anyway. It is a flawed metric, but in the absence of any kind of audited figures from the papers themselves, it is one of the few public indications of the relative audiences for RSS feeds.

In order to get the list of 100, I had to look at the figures for a lot more than 100 feeds, as there were plenty of stray newspaper blog feeds credited with only 6 or 7 subscribers. Anyway I've added up a cumulative total for each of the newspapers, including all the feeds that fell outside the top 100. It worked out to over a quarter of a million subscriptions in total

The main thing to note here is the utter dominance of The Guardian, and I suspect their final figure would have been even higher if I had researched subscriber figures for the nearly 2,000 individual author RSS feeds they publish on their Comment Is Free platform.

Next up is the Financial Times, with massive figures not just for their main indexes, but also for specialist feeds. After that The Times just pips The Telegraph on my figures, but given that I may have missed the odd feed here and there, it seems fairer to call them third equal.

It is also interesting to note The Scotsman out-performing national papers like the Mail, Express and Mirror. However, the low figures for the middle-brow British press I've unearthed rather suggests that their target audience may not be a good fit for the profile of the average RSS user.

All in all I spotted 16 newspapers with subscribers in Google Reader, and one rather prominent major newspaper which didn't seem to have any.

This pie-chart illustrating the share of RSS subscriptions within Google Reader enjoyed by each newspaper makes the extent of The Guardian and The Financial Times' dominance of this media clear - at least by the contentious Google Reader metric anyway. 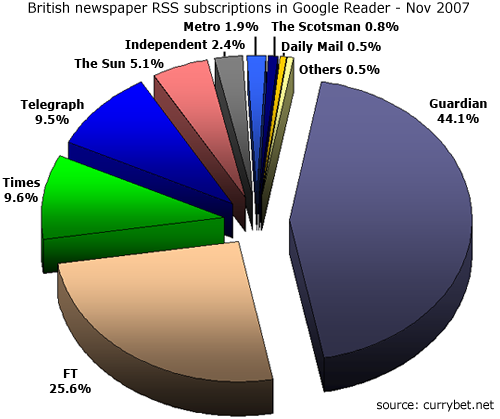 this doesn't seem so surprising since the Guardian is interesting reading, but what is surprising is how low the Independent falls. I spend far more time over in the Independent that in the Guardian because it is a rich source for scientific news and has a very friendly layout and it is a favorite newspaper and almost no time in the Guardian. I subscrbe to no rss, but take the Indy email. (does that make sense?) Frequently The Scotsman though comes up very high on the Google listing in sports and often their articles have a different slant that keeps them out of the copycats.

Go dig round in care2 in the news section and see how the balance comes up as its one of those recycling news sites... I used to dump a lot of links off the Independent into this feed.

definitely, I'm not a person, I'm a pogo. I got your lead off EPUK. love bugs--hope you do, too.