I've been doing some research around newspaper RSS feeds again - the results of which I hope to be able to publish later this week - and during the course of it I noticed that the Daily Star was publishing RSS for the first time.

Whenever I've been doing studies of newspaper features and so on, I've generally not included the Star, as their site had remained firmly undeveloped for some years. However that appears to have changed with a recent re-design, and Daily Star content available for the first time via feeds.

Now, it is fairly standard around the web to advertise the availability of RSS feeds with images and icons - in fact over the years there have been plenty of different ones - usually quite small.

The recent trend on so-called Web 2.0 sites for larger fonts has also led to a standard image and a move towards larger icons.

However, The Daily Star approach is a new one on me. 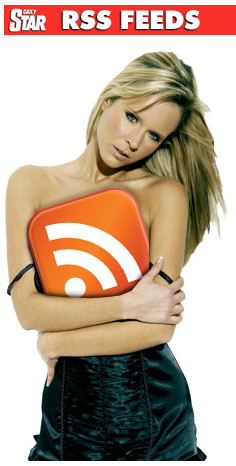 I so wish I had been in the meeting when someone said, "You know....we could get a topless bird to hold the RSS icon..."

Okay, I think every blogger should pose topless in their sidebar with a giant RSS icon. I will as soon as I find one...

I think all editorial meetings at the Star use the phrase "we could get a topless bird to..."