"How do I get a refund for an ITV phone call?"

"How do I get a refund for an ITV phone call?" - a question that around 10 million people might be asking themselves today. Or maybe they are thinking: "I wasted money on entering a competition via telephone or SMS, and I want to get my money back from ITV"

Either way, they are probably not thinking, oh I know, I'm a consumer who needs a PRS reimbursement.

However, that is exactly how ITV have phrased the call-to-action on their website for people to find out how they can get their premium rate phone calls refunded. What a wonderful piece of user-centered terminology to use. 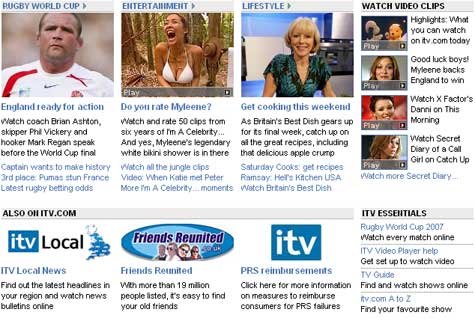 You'd think, with it having been a complete PR disaster for them, they might try to make getting a refund easier. Because I think it is going to be pretty hard for the average 'consumer' to work out, for example, if they called ITV Play 2+1 at a time "where banner advising that the competition was closed was omitted on ITV2 + 1 catch-up channel"

Once you've realised that you want a PRS reimbursment, not a 'phone call fraud refund', you can pre-register to get your money back here, or phone 08000 280180, and ITV will then send you a claim form.

The maximum refund available is £1.34 if you sent a text to Ant and Dec's Gameshow Marathon between September and October 2005, so that seems quite a bit of a barrier to go through - and presumably at least one stamp - to get your money back.

Oh, and if you have any accessibility issues with using the web, forget trying to find out which shows were affected. The table carrying all the information is a solid block graphic with no alt text.

So, I've taken the literally ten minutes that was needed to put this tabular data into a table that can actually be used by all web visitors and understood by search engines, rather than obscuring it all in an image file.

Reimbursements are made up of call charges plus an allowance for operating costs
Note 1: Please note that for Series 2 to 5 of Saturday Night Takeaway an average call charge has been used
Note 2: Please note for ITV2+1 this only affects limited dates between certain times where banner advising that the competition was closed was omitted on ITV2 + 1 catch-up channel

Any court in the land would award you 8% per annum simple interest.

But your point about effort is pertinent. Next to no-one's going to bother, even if I could remember what Tv programme I watched 4 years ago. Yet surely they have the records of all the calls made, and could quite simply recredit the accounts of those people. I realise some may have moved, or otherwise lost their number, but more would be refunded that way than this. And if they haven't, what's to stop me claiming that I did?

Perhaps a campaign of activist pre-registration by people who might be ineligible to claim to increase the costs to these fraudsters is justified?

Also, if I bought a PJ and Duncan record that purported to be musical, can I claim a refund for that too?

>> Also, if I bought a PJ and Duncan record that purported to be musical, can I claim a refund for that too?

Are you suggesting that Ant'n'Dec have a bit of previous in the musical deception stakes? They appear to have fibbed about The Wurzels, anyway

i hate your show not really only joking