In amidst the BBC axe-wielding and blood-letting this week, in some areas it has been business as usual, and in-house newspaper Ariel had a feature this week where Nick Reynolds was discussing the Biased BBC blog site.

Nick often takes part in the conversation over on the Biased BBC site - and sometimes on here as well - and it is a topic that interests me greatly.

I enjoy visiting the site and the debate on there, partly, as Nick says in his Ariel piece, because they do such a good job of it. Nick says:

"Biased BBC gets the basics of web publishing right. They post every day, have a very clear editorial focus, and link, link, link, link and link again. I don't have to read the Sunday papers anymore. Instead of lugging around a pile of dead tree I just go to Biased BBC."

And there they were, not realising that they had become part of the BBC's supposed pro-green agenda! 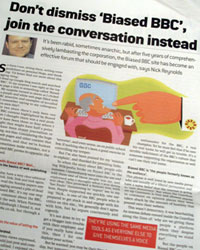 I don't often agree with what I read on their site, but I do agree with Nick that they do turn up examples of 'sloppy journalism' and 'poor phrasing', rather than evidence of a concerted top-down pre-planned slant on everything the BBC produces.

And, as I've said before, bias is very much in the eye of the beholder.

Currently Spooks is a subject of much vexation. It seems that certain sections of the audience won't believe that Spooks isn't evidence of pro-Islamic bias by the BBC unless every episode ends with our jolly decent uncomplicated chaps getting one over a one-eyed, hook-handed, Pakistan trained jihadist in full-on 'mad mullah' mould.

Personally, if I wanted to see something with spooks in it and the same predictable villain unmasked at the end of each story, I'd stick to watching Scooby Doo

Regular contributor to Biased BBC 'John Reith' gets a mention in Nick's article as well. Nick says he is still trying to work out who is, and that:

"He's an ambassador for the BBC, a real champion. Yet he must feel that if he uses his real name he will get into trouble. It's a terrible indictment of the BBC's culture that someone supporting the organisation so well can't use their real name."

I've often wondered whether John Reith is actually one person, or whether it is a pseudonym adopted by a string of BBC staffers joining in on the site when they de-lurk.

It isn't a surprise of course that Reith uses a pseudonym. I've seen other BBC staff members (or ex-staff members) post on Biased BBC using their real names, only to find themselves immediately Googled and links to their Flickr photos and other personal details posted straight back on the site.

And it is all very well the fluffy Future Media bits of the BBC espousing a culture of engagement and dialogue with the audience, but if the message coming from the top, in the shape of the chair of the BBC Trust, is that BBC staff should not discuss the BBC in public, then you can understand that reluctance to be 'named and shamed' even more.

Thanks Martin. I am planning to publish the whole article on a new personal blog of my own as soon as I can sort out some technical problems caused by my own incompetence.

That'll go down well, I'm sure

That'll go down well, I'm sure.

Thanks for the chuckle, Martin.

i work for the BBC. I am on facebook most of the day as no one cares.

My take on John Reith is that while he probably has a bit of help here and there in researching rebuttals to Biased-BBC accusations, his comments to the blog are his own. He has his own style of commenting and that would be difficult for someone else to duplicate.

Sorry, "Anonynous" above was me.

Martin, In the course of my (frustrating) interaction with The Editors blog, I sometimes recall your bemusement over the BBC's evident reluctance to remove an anti-Semitic comment from the blog.

Now The Editors is apparently refusing to publish the following comment I've sent them a few times:

Hello Mr. Barron. I’m just trying to establish whether you are censoring the comment below (I’ve tried a number of times to post it to you) or simply in the midst of the ongoing technical problems apparently rife on your blog:

I agree that this blog posts a veritable avalanche of critical comments. It's the best thing about it. But the editors are very slack indeed in coming back to debate a given point.

It's also a blog with very long weekends and seems to be active only three or four days a week. This is a point I have made often, in e-mails and in unsuccessful attempts to comment on the blog. It's simply ignored. And the flood of critical comments notwithstanding, I have also experienced a good deal of censorship of comments that didn't break any rules but simply trod perhaps a little carelessly on hallowed BBC ground, e.g. the Alan Johnston saga. While comments sympathetic to Johnston sailed through on Have Your Say and on this blog, even gently critical comments were rejected after the first week or so. Any member of BBC staff with the time and inclination to check this will find it to be true.

I also have to acknowledge, though, that perceived censorship can sometimes be just due to technical problems. Especially over the past two or three weeks it has been close to impossible to send you a comment. You should resolve these problems as a matter of urgency.

But don't kid yourself, Mr. Barron, that the BBC is even-handed in these matters. It has come a long way, I'll grant you that, but it has a long way to go to be fair, accountable and transparent.

If you bump into Mr. Barron in the BBC corridors perhaps you could ask him whether he personally rejects comments or approves them prior to publication. Or whether a clump of "moderators" does the job.

Since you've again expressed scepticism re the concept of BBC bias, I thought I'd draw your attention to a few examples I posted on Biased-BBC of the BBC's pro-Iran bias in its "moderation" of comments on HYS: