The meerkat photograph hoax review - which UK newspapers admitted online to being duped?

Last week pretty much every newspaper in the UK ran an agency supplied story that Meerkats in Longleat Safari Park had been caught snapping themselves on camera. At the time I wrote bemoaning the fact that the very same newspapers that were so keen to see broadcasters admit to any case of minor editing on the box, were themselves running photographs that were clearly a 'reconstruction'.

It turned out that the entire story was a hoax.

I thought it would make a good case study in how newspapers deal with corrections and clarifications online. Which newspapers go back and re-edit stories that have turned out to be unfounded?

So, I've gone to each of the major papers in turn, searched for 'meerkat' and 'meerkats', and seen what turns up.

The Daily Express still features their original story "The Meerkat Photographers". There is no correction to the story or mention that it was a hoax.

The Daily Mail's original coverage is also still online - complete with rather unweildy headline "Smile! You're on meerkat camera - warden's shock as cheeky creatures shoot their own family album"

The article has no correction attached, and has attracted three user comments about how sweet and cute the animals are.

The Mirror was virtually alone online in covering the story without reproducing any of the alleged snaps, and their story - Meerkat is picture perfect - also remains uncorrected.

The Guardian seemed to pick up on the story a day later than most other online news outlets, with their G2 "The human zoo" piece dated 7th September. This was rather more of an opinion piece from Patrick Barkham than a news piece, so probably didn't require a correction.

The Independent doesn't appear to have covered the meerkat story online - however it is difficult to be sure. Using the Independent's own search engine seems to bring back random articles that mention the word 'meerkat' once, with the lowest score first, in preference to articles from the paper that are about meerkats and score 100% on relevance.

The Sun went as far in their original article as crediting one meerkat with the photograph of another meerkat apparently taking a photograph - so it is no surprise to find that there is no correction or retraction of the story online here either. 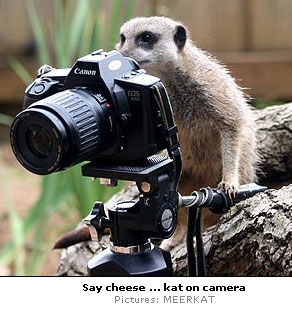 Perhaps they just didn't have the heart to tell MercGirl that it was all untrue after she commented:

"Absolutely adorable, what a lovely bit of news for a change"

The Daily Telegraph broke ranks by publishing a story aboiut the hoax on the 9th September, which, along the way, cited my previous meerkat post as a dissenting voice about the story. They also went back and edited their original story.

It now reads "Last updated 9-9-2007" and features a prominent link at the top of the page saying "Update: Meerkart photoshoot exposed as a hoax"

"That's what you call wildlife photography" from The Times gets us back to more familiar ground - no online edit, and no follow-up exposure of the hoax.

They have at least though had the good grace to publish a user's comment on the issue:

"Sorry to disappoint but the Head Warden at Longleat has confirmed this as a hoax."
J Barker, London

Correcting old stories online is a contentious issue. Should newspapers keep the archive accurate to what they published at the time, or should the archive be constantly evolving towards a more objective 'truth' when there are mistakes?

I can think off-hand of two high profile occasions when the BBC has done it, although there are plenty of minor revisions made during the course of every day. Barbara Plett's notorious 'I wept' report about Yasser Arafat had an addition made in the footer pointing out that the report was subject to a partially upheld complaint. And N'kisi, the 'talking' parrot, got expunged from the archives altogether.

Nicholas Carr recently wrote about how newspapers injecting their inaccurate content into search engines was distorting the past - which was putting it a bit strong.

However, as this quick review shows, of the 8 major national newspapers, the majority of them seem happy to leave this demonstrably (albeit pretty unimportant) untrue story up in their online archives, still highly ranked in their search results, without a hint of a correction or a retraction.

The same is also true is of reports of Bob Woolmer's murder - as evidence by your new (excellent) search engine.

The system does, however, work very well for stories that have gone to the PCC or legal action which aren't available via search engines.

Any solution has to contain sufficient financial threat to news organisations that it is greater than the traffic they get to inaccurate stories.

You say that N'Kisi has been expunged from the archives alltogether. But looking at the most recent version of that page you have got from from the archive at web.archive.org:

about 2/3rds of the way down the bird gets a mention!

I hadn't noticed that Anonymous, thanks for pointing it out. However, I don't think there was ever any dispute that N'Kisi could mimic a lot of words. The item that was expunged though also included the claims that he made up his own words using a rudimentary grasp of grammar, had a sense of human, and was telepathic. Those sections have certainly gone!

This isn't just a demonstrably untrue story. This is an immediately and obviously (to anyone with an IQ higher than three meerkats) untrue story that isn't possibly newsworthy or worth the risk of being exposed as fraud.

The fact that the press don't issue corrections is extraordinarily valuable: it reminds us that when they tell us that our lives are imperiled by brain-sucking aliens, paedophiles, Middle Eastern dictators, brown-skinned immigrants, or cuts of juicy roast, they are not under any circumstances to be trusted.

This is yet another case of the media not properly vetting a story before picking it up and running with it. It happens all the time. At least this time no one's reputation was irreversibly damaged by it.