At the weekend I was in Barcelona for the Euro IA summit, and so, whilst trying not to blog my every move for a change, I thought I would post my key take-away facts and quotes from the conference. I covered day one yesterday. 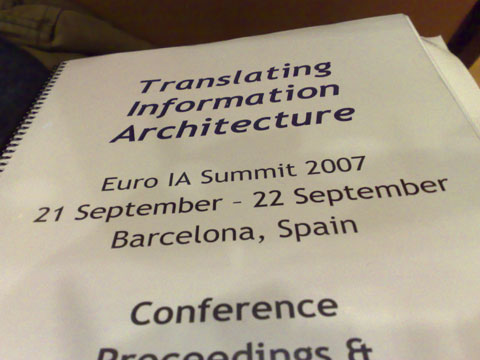 I started the second day of the conference listening to Stanisław Skórka talking about the bridge between the librarian and information architect professions. 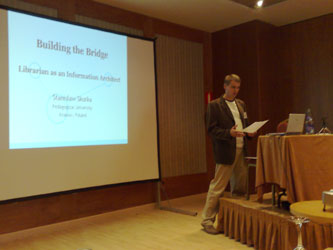 I don't envy any of the speakers having to present in something other than their mother tongue, but Stanisław was very funny, with lots of entertaining pop culture references to things like Noah Wyle in "The Librarian", Umberto Eco and Luke Skywalker. He also managed to tell a librarian joke in a second tongue, and recount a story about how information architecture helped him to buy Polish sausages in the grocer shop.

More importantly, he made some salient points about the cross-over between the two disciplines, and the lessons that Poland's librarians could learn from the user-centred approach that Information Architects bring to web design.

He argued that since a library is very often the first place children and students have contact with dictionaries, indexes and tools for information searching, then a library website should perform that function too.

My favourite facts and quotes:

"Librarians tend to think they are on a mission"

"IA is not only a craft or discipline, but also it is a point of view"

I was disappointed that Frances Forman had to pull out from the conference due to illness, as I was really looking forward to her presentation. However, the upside was that it meant that I got to see Claire Rowland talking about "Service Design". Claire is a really engaging speaker, and it was a very, very good session - informative but also on the right side of light-hearted

Talking about a project around "quad-play" services, she delivered the killer research finding:

"We learnt that people's houses are a bit of a mess"

Claire was quite coy about mentioning any of Seren Partners' clients by name, but for someone from the UK the descriptions of their types of business and issues made it quite a guessable list. There was also the odd distinctive telco logo lurking around in the illustrations as well ;-)

I was interested in her thoughts on how 'Moments of truth' affects brand and service perception.

"You will find key parrts of any service when you absolutely need to get things right, when people are feeling uncertain, and if you serve them well the have a fantastic experience."

Claire touched on some of the ethical issues and limitations around service design as well, citing the Nike / iPod tie-up as an example. She pointed out that if your biomechanics suit the exact make of shoes, and you've got the right model of iPod, and you only ever run for exercise, then the heavily branded Nike experience is seamless and designed just for you. If you have any other kind of (Nike or otherwise) shoe requirement, iPod, or do any other exercise, the result is a poor customer interaction and user frustration.

My choice quote from her though, when talking about making lo-fi prototypes of objects was "This is a thing of type x and it does this, this and this".

I don't know what it did, but I wanted one.

Are Halland was presenting his 'Core and Paths' model of information architecture. He identified sites like Flickr, YouTube and so forth, who have really focussed their architecture on the granular 'core' of their content - in this case the photo or the video.

I was really impressed, not just with the compelling simplicity of the model presented, but with the fact that Are put great store on different entry paths into a site.

He opened with an amusing list of the 7 Deadly Sins of Information Architecture, of which the second, the Sin of Introvercy, is, I think one of the worst. Here, Are was talking about getting so involved in your site map and navigational paths that you forget that a lot of people will enter the site at the page level, rather than the homepage.

His was the only presentation I saw to explicitly mention SEO, and one of only a couple to mention RSS and content syndication. He also had a neat slide illustrating the influences on his model as a tag cloud. 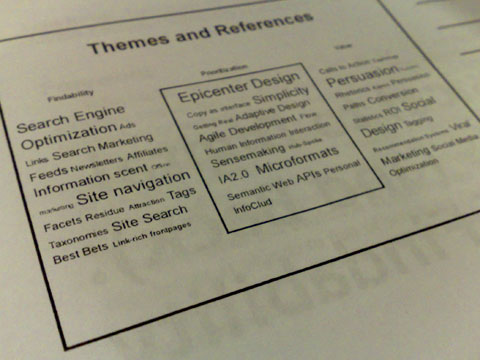 Frances Forman wasn't the only absentee, as the Tom'n'Matt axis of the advertised Biddulph / Coates / Hanley session didn't make it, leaving Margaret Hanley to present on her own. 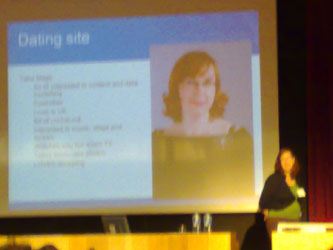 Mags didn't just lay out the idea of mash-ups and web services as an abstract 'good thing' to do though. She used a couple of cases studies from her own work to help people understand how they could sell the business benefits of setting data free.

The Future of Euro IA

The final keynote was due to be presented by Morten Norby Larsen from Joost. He also couldn't make it - the fourth absentee from the second day programme - so the replacement was an über-panel session with six of the great and the good from the Euro IA scene. 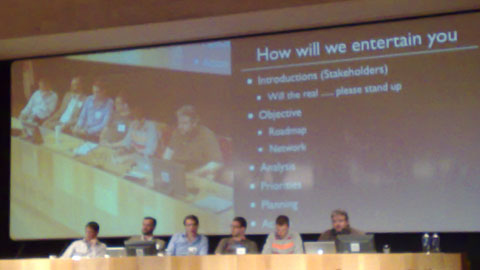 It started with a Mac crashing, which amused the PC users like me.

As part of the session they got people to stand up country by country. Sadly, my cockney accent shattered the illusion that for the very first time they had attracted an IA from Greece - "Sorry, I'm just borrowing their sunshine" I apologised.

(Incidently, for my Greek audience, Euro IA desperately need a country ambasador for the Hellenic web. You can find out more on the Euro IA site)

Anyone gets to say whatever they want from the floor during the shortened 3 minute madness session. I enjoyed:

Other things I found out included...

Just to add to my 5 minute madness shout-out: I think IAs have a lot to contribute to neighbouring fields. I'm all for cross-pollination. It really is too early days to be drawing borders around such specialized fields as IA.