I see that the latest television programme to become embroiled in the 'fakery' scandal is Bargain Hunt. Apparently audiences were mislead - events seen on screen often had to be reproduced for the camera, advice was given that was not shown on screen, and the programme isn't recorded in real-time.

This latest scandal should be a wake-up call for all British broadcasters, that they need to take firm action to expose this habitual culture of deceit.

I propose that the five terrestrial broadcasters get together and announce they will simultaneously broadcast a day full of programming without any artificial elements.

No re-takes if something goes wrong.

No multiple camera shots of the 'same' event if a production only has one camera crew on it.

The BBC could perhaps broadcast some of their famous nature documentaries, but simply leave it to chance as to whether any animals appear in it or not.

Daytime property shows could revert to just simply knocking on people's doors and hoping that they want to sell their houses - as pre-selecting the participants for these kind of shows is clearly a form of audience trickery.

Comedy quiz shows should be broadcast where the panel haven't been given access to the questions in advance in order to prepare their routines.

Perhaps ITV could do a Stars In Their Eyes special, where after the hairy 40 something truck driver utters the immortal words, "Tonight Matthew, I'm going to be Celine Dion", the camera lovingly lingers on the stage entrance for about 3-and-a-half hours whilst the audience waits for the make-up job to be completed.

And at the end of the day, the viewers can then make a more informed decision on whether they want their TV to be completely honest, or whether it isn't just a teeny-weeny bit more entertaining and better made with a degree of artifice in it.

Deliberately defrauding viewers and listeners of money by faking competitions is one thing, and without doubt a crime...but faking 'Bargain Hunt'? 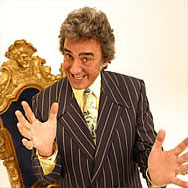 Also, any graphics and promo materials should consist of a raw untreated photograph for the avoidance of any possible doubt.

This news has left me devastated. I've had my faith in humanity shattered. I can't believe the BBC have betrayed me like this.

Next they'll probably tell me that Holby City isn't a real hospital and Doctor Who isn't really filmed in space.

What? Is the Mighty Boosh not filmed in a zoo? Is Vinces hair real?

but its fun watching the orange tan

I have been a contestant on Bargain Hunt and it is not faked. All that happens is the same as happens on most TV shows. Yes, the items are purchased off camera and then later recontructed for filming, It takes hours, with close-ups, re-takes, voice overs. It just could not be done live. There are two shows being filmed each day. It all takes hours. This is no different to any other show that seems to go out live, just watch the numerous "out-take" programs on Tv to see what really happens. It is not faked it is just how a programme is made and I think the person who "leaked the fake show story" were either too stupid to realize that is how TV shows are made or were just looking to make some money.

I have just finished watching Bargain hunt, where a couple bought a variety of items which sunsequently made a huge loss at auction, What I want to know is, who pays this money? and does it come come license payers hard earned?

I am a keen watcher of bargain hunt since the start. In the begining contestants were quiet when the auction was being conducted,much nicer. If you can't stop them from making all the noise which makes no difference at all to the dealers, At least get Tim to stop retching and vomiting. It doesn't help the program one bit.

The people who said the show was faked weren't the sharpest tools in the box to be quite frank!

I agree with Alan Miller's comments 100%.

Well I still enjoy watching it. It must be about the last programme on the BBC that doesn't insist on the pre-requisite quota of ethnics. I dont think I've ever seen an asian on there.

Those damned ethnics eh? Clogging up our TV eh? Or not...

I'm surprised that Tim Wonnacott has survived 700 bargain hunts. Why does he wobble his head about and try to be cleverer than everybody else with his asides to the camera? The only reason I watch is to see the so-called experts lose so much money. When one of the experts' so called bargain was bought in at auction after he spent over £100 for it, it made my day.