Why my Doctor Who blog failed: Part 1 - The Greatest Show In The Galaxy

Back in December 2006 David Jennings posted a thoughtful piece about his "69 Love Songs" wiki. In it, he stated what he thought had gone wrong with it, and what had stopped it from being being a success.

"Two years ago I created a wiki site about 69 Love Songs, my favourite album. I had in mind an evolving resource where people would add new perspectives on each song, so that it would grow in time to become a comprehensive guide to their many allusions, references and influences. At the time I first published the site, I wrote an account of its development and my hopes for it.

I've had a lot of positive feedback on the site in private and in public. However, as a wiki - a collaborative work - the site has been a relative failure. The inspiration I drew on was as much Simon Winchester's story about the creation of the Oxford English Dictionary, involving the co-ordination of the distributed work of several hundred Victorian volunteers, as Wikipedia. But the number of contributors is probably still in single figures, and 95% of the updates over the last two years have been done by one person: me."

It started me thinking about how one of my own online ventures had not worked out, so I thought I would outline what it was, and where I think it all went wrong. Even though, like David Jennings and his Magnetic Fields wiki, I still think the concept was sound - it was just that my execution of the idea was poor.

The idea for the site came out of the fact that I am a big fan of blogging, a big fan of Doctor Who, have a keen interest in pop-culture history, and I'm interested in the historical context of media.

Phil Gyford's Pepys Diary blog, republishing Pepys' diary on a day-by-day basis and allowing people to annotate and interact with it, had gained a lot of media attention. That was launched in January 2003, just as Doctor Who fans were gearing up for the 40th Anniversary of the show first being broadcast in the UK.

And that sparked my idea - doctorwhoblog.net.

I launched it to coincide with the anniversary of the transmission of the first ever Doctor Who story - "An Unearthly Child" - on 23rd November 1963. 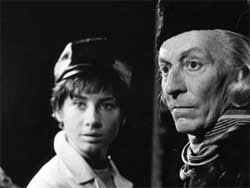 To my shame, and my wife's irritation, I did most of the template coding on my honeymoon in Cyprus - I'm nothing if not a romantic at heart.

The concept was quite simple.

It would be a blog, and each entry would be published on the 40th anniversary of the date when an individual Doctor Who story had first been aired.

The intention wasn't for the pages to be about the story itself, because there are already far too many official and fan generated online guides dedicated to all that.

Instead, my idea was for it to be about the ephemera and contemporania that surrounded the original transmission.

I would therefore list and link to what music had been top of the charts, and which acts had appeared on Top Of The Pops that week. I listed which space missions were active at the time - which during the cold war space race frenzy of the sixties was a lot. There were news headlines, and occasionally even what the football results had been on that Saturday.

And so, for 'An Unearthly Child' I listed:

By using the blog format, I was hoping that people would add their own comments to each story, perhaps of remembering watching it (something like The Time When did when it was open), or something else they knew of the time, or to point out some weird coincidence or trivia.

I was also hoping that the permalinks would become great URLs to link to when discussing a particular Doctor Who story.

Finally, I thought that by putting on some blocks of AdSense and some Amazon affiliate links to Doctor Who merchandise related to that episode, it might even make a little bit of money on the side to offset the effort.

It completely and utterly failed to do any of those things.

And I've come to believe that this was due to four fundamental failings with the way I executed the concept, rather than the concept itself.

Over the rest of this week I want to look at each of these failings in turn.

Read other recent posts about: Articles, Doctor Who, Popular

Looking forward to this. I was thinking about Tom Ewing's UK #1s blog Popular as I read this, where the sense of changing times isn't formally and regularly there in the posts, but has emerged from the comments.

Actually thetimewhen.co.uk turned into Memoryshare, in partnership with individual sites such as BBC London: http://www.bbc.co.uk/dna/memoryshare/london/ArticleSearch?contenttype=-1&phrase=_memory&show=10

hiyha im a big fan of doctor who!
i know lots of thing about the 9th and the 10th so that why im a big fan so if someone how know david tenniet tell him im a big fan!:)) :)

Wow, while I have not watched an episode of Doctor Who, I'm glad for this type of analysis, to figure out why a perfectly good idea didn't work due to execution, or as I would call it, the right process.

Interesting rationale on the failure of your blog, Martin. I've embarked on my own Doctor Who related site (built using Wordpress, not Moveable type) with the intention of focusing as much on the merchandise as on the show itself, but I hope I can learn a little from your mistakes (I least I don't have the conflict of interest with working for the BBC :) )