With just ten days to go until the launch of the BBC's much anticipated iPlayer software, I thought I would gaze into my crystal ball and predict what the first two weeks hold for the software... 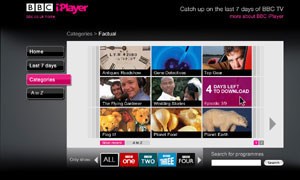 Day #2: The press reports that the BBC website 'crashed' due to demand for the iPlayer, because someone emailed someone at The Telegraph saying they couldn't download it over their dial-up connection. A BBC 'source' is quoted as saying that 'managers' are to blame for spending the money on more Jonathan Ross instead of on more computers. 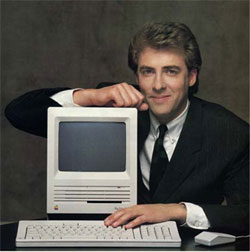 Day #3: A blog post entitled "Ten Mistakes that the BBC made with the iPlayer" hits the front page of Digg. Mistake #1 in the list is using Microsoft's DRM. Slight variations of that gripe appear as numbers #3, #5, #6, #7, #8 and #10. Other points made include the lack of comprehensive series-stacking and bookmarking, both of which it fails to mention were quashed by the BBC Trust rather than the iPlayer team.

Day #4: The front page of the Daily Mail trails an article by Max Hastings entitled "With nothing to watch on TV, and all those repeats, do we really need to download programmes from the BBC?" 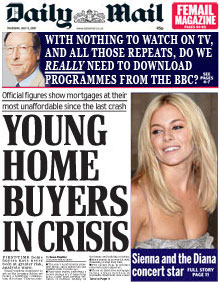 Day #5: First reports of an exploit of the iPlayer's DRM system begin to surface on the web, and links to a hack appear on Slashdot, Digg, and, by mistake, on the BBC News site for five hours.

Day #6: The BBC's backstage.bbc.co.uk mailserver melts under the weight of multiple gloating anti-DRM posters saying "Told you so. Linux rulez teh internets". 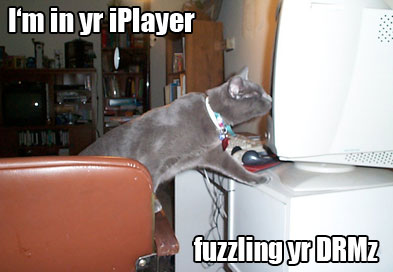 Day #7: The mainstream press all run with a story that the BBC's DRM system doesn't work, and question the amount of money that has been spent on it. Not a single article mentions that the UK's other main public service broadcaster is also employing the same system. Or that the iPhone was hacked within a couple of days. Or that HD-DVD decryption keys keep leaking onto the internet. Or that it was actually the members of organisations like Equity and PACT who insisted on DRM being in the iPlayer in the first place, not the BBC. And...well...you get the picture...

Day #8: A fake picture of the iPlayer software running on a Wii console becomes the most Digg'd article of the day. 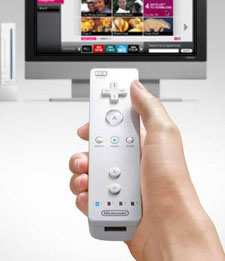 Day #9: Page 3 stunner, Emma, 19, Wokingham, takes the view in The Sun, surprisingly for a News International publication, that now people can download BBC programmes onto their computers, perhaps the government should consider abolishing the Licence Fee. 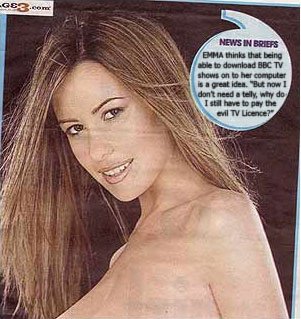 Day #10: The BBC announces iPlayer v2.0 in a bid to deflect attention from early teething troubles.

Day #11: Questions are asked in the house, as a less-than-tech-savvy MP with the wrong end of the stick questions the culture secretary about why the BBC iPlayer will not allow his constituents to download MacIntyre Investigates.

Day #12: A group of support charities issue a report saying that the iPlayer software has high standards of accessibility, and is one of the most usable pieces of video download software on the internet for people with visual impairments. Nobody cares. At the same time, BIPA issue a press statement claiming that page views to non-BBC media websites have fallen by 5% due to the monopolistic ambitions of the iPlayer, and that as a result it will cost the British internet industry millions of pounds and damage long-term job prospects. Every newspaper covers this.

Day #13: A well-meaning but misguided children's charity issues an attention grabbing press release stating that because the BBC is using peer-to-peer file sharing technology, it is encouraging people to connect their computers to the computers of strangers, and consequently aiding the distribution of child pr0nography over the internet. All of the British press cover this as well.

Day #14: The Daily Express front page "Now Poles Steal Our TV" reports on how 'hackers' in Poland have managed to bypass the BBC's GeoIP system and have downloaded and installed the iPlayer software on a computer in Gdansk. They haven't been able to download any programmes yet, but that isn't the point, the paper thunders. Those Poles are nicking our TV for free, yet we, the oppressed law-abiding white middle classes of England, have to pay our Licence Fee whilst the BBC insults our Queen, godammit! 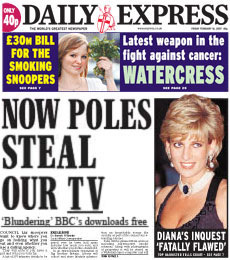 Please note that all website screenshots and newspaper front pages are spoofs. Except for the bit in the Daily Express picture claiming that watercress cures cancer, which, funnily enough, I didn't make up.

currybetdotnet is a personal site, and the views expressed are my own, and do not reflect the views of any of my current or former employers, especially the BBC.

Fuzzling DRM lolcat features Smokey from the Creative Commons Licensed photograph 'The cat and the computer' by m_sabal.

You might also be interested in Free the BBC from the same old tired DRM debate, or other articles from my BBC and iPlayer categories.

Day #9: Martin's fake Wii image from Day #8 appears, uncredited, on various blogs and becomes the most Digg'd article of the day.

Excellent post! I think I'll start a sweepstake in this little corner of the Beeb on how many of those come to pass. Bonus points if they happen on the correct days!

The BBC iPlayer has been promoted as replacing the BBC Radio Player and their other Players. But, seems no radio is included initially. And, eventual inclusion of other audio players will get them under the roof, but not integrated into one player or even one audio player.

And, what about personalisation--presets, interests, playlists, email sharing...?

Saddest thing: you're probably spot on.

And lovely picture of Jonathan Ross ;)

See you out there soon...

yep. and look here's no.5 coming in early...
"BBC iPlayer launch on, despite crack"

Nice article Martin, am just waiting for this to hit the front page of Digg now ;)

This is quite possibly the funniest thing you have ever produced.

You have far too much time on your hands.

This really is a brilliant read, this is the first thing I've read over here on currybet (got the link from an Irish blog, mulley.net), great work.

Feel free to digg this story... it's better than most of the iPlayer stories on there currently, most of which are hinted at above!

And the DRM-cracking reports are already in:
see here

Our Toppy PVR died while it was supposed to be recording The Last Enemy t'other night, so we had to resort to iPlayer on my widescreen laptop, in the living room with a G&T...sounds like an episode from Cluedo the sit-com...but it wasn't too bad.

PS A leapyear bug fix for the troubled Toppy was posted yesterday, phew, but I have no idea what's on TV on Friday ;-)

did you really post this back in August? Talk about prescient - wonderful

iPlayer now works with Nintendo Wii, although I cannot figure out how to make it go fullscreen...

The articles are great. keep with the good work.

"Wow iPlayer is really cool. I mean it's a pity that it does not work in other countries but still, I'd need to say that iPlayer rocks the shit.

I've purchased the P3 last week in Korea, and iPlayer vides are working without any problems."