It hasn't been a good week or so for the 2012 London Olympics, what with the logo fiasco and all that.

The Sun, well known champion of minority rights and anti-discrimination, ran a competition featuring a blind woman and a monkey to improve the logo design. Nice to see The Sun think of them as equals.

And I noted that they managed to plug the software used by their designer for her effort:

In two ticks she had come up with a design of circles based on the colours in London’s iconic Tube map, with the Thames in blue."

They didn't, though, seem to mention that TfL might not be so happy about their distinctive map being used in this way.

The BBC News online site hasn't exactly covered itself in glory here either.

Firstly their gallery of 'alternative' logos included one that bore more than passing reference to the goatse internet meme, and which consequently got onto TV screens - although it seems the evidence of this has been yanked from YouTube already. 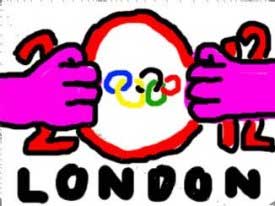 Then today the BBC published an extraordinarily tedious article explaining how if you take the words London, 2012 and Olympics and add such a familiar design element as the Olympic Rings, sometimes you get very similar logos from different people which basically feature, well....erm....the words London, the Olympic rings and the date 2012 in them.

This is hardly design theory rocket science - although thankfully it did still seem beyond The Sun's monkey.

What is much more troubling Olympics news though this week, and perhaps where the rest of the press other than Martin Samuel at The Times might care to focus their attention, is the story that Waltham Forest, one of the host boroughs for the games, is to lose its biggest swimming pool at the end of July. It is one of the largest in London - although still slightly shy of Olympic length.

Now I, of course, learnt to swim (badly) in Waltham Forest, and came last in some sort of 10 metre underwater dash as a young Cub Scout, proving that I had no Olympic potential whatsoever. But at least I had the opportunity to find out.

The college is short of a six figure sum to keep the pool maintained, and can no longer afford the losses it incurs. They will be closing it from July 31st.

I don't go along with Martin Samuel's comparison in his piece in The Times between the cost of the unpopular logo and the cost of keeping the pool open. He argues that:

An Olympic logo that could have been designed for nothing by the students in art colleges around Britain came in at roughly £400,000

Firstly, you could theoretically spend that £400,000 over and over again until the world was a totally better place, but secondly, on a more practical level - sure the students could have produced a logo for nothing. But then how you also, for "nothing", told them that the competition was happening, and produced a legal set of rules to govern the competition, and judged the results, and got the finished artwork to the press to reproduce, and so on and so on is a mystery to me.

However, I do agree with his overall point. The pool's catastrophic shortfall is £74,833 per year, plus a one-off £159,000 maintainence bill. Samuel points out:

"The last Olympic budget, as discussed by Tessa Jowell, Secretary of State for Culture, Media and Sport, was £10.4 billion. And yet, between them, the mayor, the council, the Government, the lottery and all the other bureaucrats, politicians and self-promoters that are attached to our Olympic bid will stand idle as sport at its most beneficial level is bulldozed to make way for a three-week extravaganza."

Residents are naturally upset. Walthamstow's own local paper broke the story on the 8th June, and the comments on their site allow people to have their say on the topic:

Anyone who watches the squad members, who range from 8 to 18 years of age, train for hours every week will realise the determination and dedication that competitive swimming demands. How can we repay this commitment by taking away their training facilities. The Borough of Walthamstow makes huge play of the role is has as an Olympic Borough. Well it is time it demonstrated that this is more than "spin" and give our youth the facilities they deserve. Debbie, Highams Park

This is terrible. The decline in sporting facilities in this area is hurting the community and causing long term damage to our youth. My daughter learnt her first swimming strokes in this pool and that opportunity is being taken away from our future generations. It is a sad loss. Gary, Woodford

My son swims for the gators, can't believe the goverment can not help to keep open this pool. An olympic borough HUH!!! SAVE OUR POOL. Nicola, Chingford

I'm hoping that the dramatic announcement of the impending closure is a bluffing campaign PR stunt by the College to cause an outcry which will mean the money simply has to found from somewhere, or may be donated by some wealthy benefactor to Waltham Forest.

That will only happen if the proposed closure gains sufficient publicity.

With The Telegraph camped outside the house of one of the design team who worked on the logo project in the kind of stake-out usually reserved for suspected paediatricians or 'Z'-list celebrities accused of enjoying nose candy, I'm not holding out much hope for the media as a whole to get their priorities right, and start giving this kind of story the attention it deserves, rather than hyperventilating over a logo that will ultimately be made tolerable by five years of familiarity.

the logo should be pretty fine, what matters is the spirit of olympics and that should be the main concentration when designing a logo