When The Sun first launched their MY Sun social networking / blogging / message-board platform last year, I wondered how long it would be until they started soliciting topless pictures of their reader's wives.

I didn't have to wait too long.

I don't know if it is strictly the first time they have done it (given their Page 3 Idol competition a couple of months back), but during the run-up to Easter, in their "Easter Bunny" competition (first prize is to be in a Page 3 shoot) they are specifically getting the entries by having girls upload saucy snaps to the site.

The thing is, it isn't that I mind seeing ladies in a state of undress - far from it - but I think there is a time and a place on the internet to encourage young women to send in semi-naked pictures of themselves, and I'm not personally convinced that the place should be the website of the UK's biggest selling daily newspaper.

What really annoys me is the hypocrisy of The Sun.

Here are some samples of The Sun stories about the internet:

"The Internet is the biggest danger to children ever."
from Can we stop web pervs?

The paper is clearly, therefore, aware of the dangers of young women being exploited on the internet.

So why then are they publishing calls to action like the one below, ecouraging readers to send in the pictures of themselves, when they have scant security in place to defend anyone under the age of 18 being exploited by their own competition?

They only have two check-points where they establish the age of anyone using the MY Sun service.

When they register users have to set their date of birth, and tick a box that says they are 18 or over. The application for an account stalls if the birthdate indicates you are under 18.

There is, of course, nothing to actually enforce that restriction.

I applied for a MY Sun account using a free web-based email address, setting a password, and then selecting a birthdate which would make me a couple of days shy of my 18th birthday. The application was rejected. So far, so good.

But then the site allowed me, directly from the page displaying the "You must be over 18" warning screen, to apply again. I used the same email address and password combination, and just shifted my fictional birthdate back a couple of days. This time the account was authorised.

From that point on, The Sun has got no idea for its Easter Bunny competition whether the 'glamour girls' in their saucy snaps:

It is impossible for News International to police that.

Photographs are seemingly post-moderated, and there is an 'alert moderator' functionality, but it is entirely unclear to my untrained eye how you visually spot the difference between a topless girl who is eighteen years and one month old, and a similar photo of her taken two months previously. Or how you tell whether the person in the photo has consented to the photograph being uploaded.

Especially to a brand that devotes so many column inches to attacking online paedophiles and the dangers the internet poses to children.

And then there is another aspect of child protection on the internet to this as well.

The age restrictions only apply to becoming a member of MY Sun. There is not even an attempt to restrict viewing this type of content to members only. The URLs and picture-laden blogs of the Easter Bunny wannabes can be viewed without being logged in by anyone of any age. 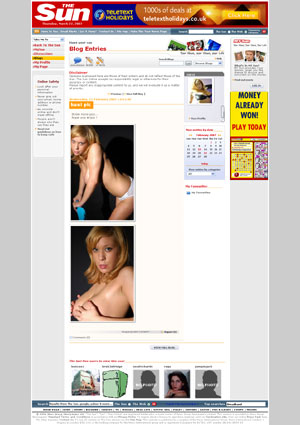 Whilst it wouldn't make the proprieter of the Daily Express blush, I find it astonishing that The Sun wants its online brand extension associated with the type of content pictured above, and thinks that this type of content is firstly suitable for all, and secondly, sits well with their general editorial tone about the dangers of the internet.

Read other recent posts about: Children and Teenagers, The Sun

right well if this is true how did the daily sport get both linzi dawn makensie an her sister to pose topless in the daily sport at 16 years old i remember the papers because because every one in work had a copy an it was totally legal has the law changed since ???

Yes, apparently this is true - I was confused and thought that the 18+ age limit for models appearing in top shelf mags also applied to newspapers. I was wrong.

Which means that hanging around the school gates looking at fully clothed girls who are 15 years and 364 days old is an activity for vile filthy peados who should be strung up and imprisoned for life. However, passing around work topless pictures of girls who are two days older is perfectly sociably acceptable. Funny old world, eh?

I am a big fan off page3 and would love to pose for the paper myself! But i was utterly shocked to discover that the sun had breached their contract by letting a seventeen year old girl pose topless for their spread! x.