Think Arsenal, Think Israel, but don't think Cyprus or any other national symbol

Late last year there was a controversy at the Emirates Stadium in London where Arsenal play their home games. Mete Ahmed was flying a flag of the internationally unrecognised Turish Republic of Northern Cyprus. This upset a lot of people, as Greek Cypriots find the flag offensive as a symbol of the division of the island, and there was a campaign to stop it being flown.

At first Arsenal reasonably said that the politics of the situation were nothing to do with them, that they valued support from both sides of the last divided island in Europe, and that since it was not technically illegal to fly the flag they would take no action.

Personally I believe that was the right thing to do. I understand that the division of the island is an emotional topic for people on both sides of the island, and also in Greece and in Turkey. Having lived in Greece and visited Cyprus several times I've also met and spoken to people affected by the conflict.

In the face of mounting criticism from Greek Cypriots though, Arsenal changed their policy, and asked that supporters (incluing away fans) no longer brought flags symbolising any nation into the ground. Not only did it stop Mete Ahmed bringing his TRNC flag into the ground, it also stopped anyone in the UK bringing in an English, Scottish, Welsh or British flag.

So having taken such a strong stand against flags because of the potential offence caused by the display of a national symbol, I was astonished on Sunday to see that Arsenal had decided to accept video advertising from one side of one of the most disputed territories in the world. 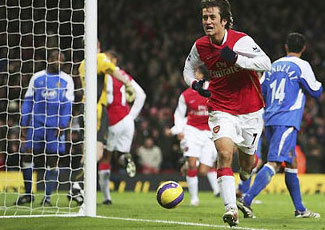 Perhaps Arsenal could consider extending their policy that national symbols in disputed territories might cause offence from just affecting their paying fans to include their advertising sales department as well?

The trouble is, every time I think Eilat, as suggested by the billboards, I'm reminded of suicide bombers. Is that what they want?

no matter how hard they try to win our hearts and minds, israel remains the apartheid regime it is!

A country who does not respect human rights and collobrates with America for the distruction of the middle east has no place in football or sport and by allowing their presence it is an insult to humanity and freedom.

But of course you have no problem with the fact that Arsenal is sponsored by the national airline of a country which funds hate and anti-semitic think tanks and builds its cities on the backs of slave labor. Don't be hypocritical. And while you're at it, get educated: Israel is not a disputed territory (except by anti-semites).

Steve, I think you have willfully misrepresented my point to make yours. I think it is fine for any legitimate business to advertise and take out sponsorship at Arsenal, whether it is based in the UAE or is the Israeli tourist board, provided Arsenal extend the same courtesy to their fans over flying *their* national symbols.

Regarding your inference that to even mention that there is an ongoing dispute over Israel makes me an anti-semite, well, I would rather have refuted that slur on my character privately and personally. However, you didn't have the courage to leave any contact details.

Thank you for standing by us. Warms my heart seeing articles like these and the fact that propaganda directed against Palestinians and their aspirations aren't only visible to us Palestinians, but to the rest of the world.