There has been a dribble of coverage recently that Sony has lost a court case in France over the inclusion of DRM restrictions with content downloaded from the Sony Connect store. The verdict was apparently delivered on December 15th, but only just seems to be making news following an announcement by the group taking the action, the Union Federale des Consommateurs - Que Choisir. Sony themselves have so far declined to comment as far as I can tell. 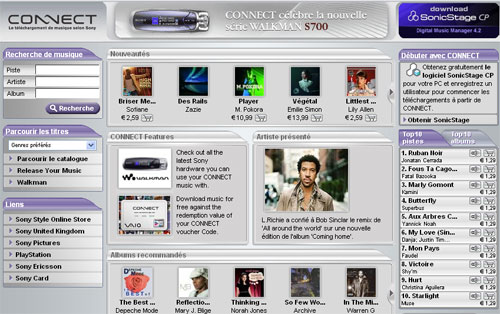 The case was made that Sony did not do enough to inform consumers that tracks purchased from the Sony Connect store would only be compatible with Sony Walkman players due to the use of the ATRAC format, nor to inform users that they would not be able to play tracks purchased from stores such as iTunes. The court also seemed unhappy with the practice of bundling downloads from the store with the purchase of a digital Walkman.

I haven't been able to find any kind of full text of the verdict, so I am not sure how much of the trial also focussed on the information available to the user at the point of digital sale. On a couple of my projects it has been quite a challenge to find a way of presenting to the user the information they are entitled to about the DRM restrictions placed on the digital file they are downloading, without making the checkout page of an online service look like a mountain of legalese.

It is pretty standard to state that the track can be downloaded onto x number of computers and y number of digital music players, and that z number of copies can be burned to CD, but the increasing sophistication of mobile phone and small-screen devices in playing multimedia content is rapidly blurring that divide. At what point does a phone with mp3 capability and removable storage become an mp3 player? And at what point does a player that can handle music, photos, videos, games and applications become a computer?

Another thing I'd be interested to find out is if the court made any comment on the fact that to upload content to a Sony digital walkman you need to be using the SonicStage software, which in turn also requires you to have Microsoft's Windows and Internet Explorer software.

The fact that so far coverage of the court case appears to have been confined to an eclectic range of publications is a reflection on Apple's dominant position in the market. Even much of the coverage there has been has focussed not on the issues for Sony, but the wider implications for the symbiotic iPod/iTunes relationship, which is facing the same action in France, and a similar case in the U.S. bought by Melanie Tucker.

This case in France may also have been a factor in the more widely reported remarks before Christmas by Sony Electronics head Stan Glasgow that "DRMs are going to become less important" in the future. Glasgow's reflection on the Connect music store was that "it has not been successful".

He may have a point about the future of DRM. Despite Apple's hardware driven near monopoly in the digital music download market, the consumer behaviour that has made eMusic the second most successful music store shows a real appetite for DRM free content. And another member of the Sony family, Sony BMG, has already dabbled in the DRM-free world by partnering with Yahoo!.

This particular ruling, though, doesn't mean an end to DRM restrictions in France. However it does mean that unless an appeal is upheld, Sony will have to more clearly mark their hardware products to illustrate that music purchased from rival digital music stores will not play on them, and may have to reconsider the promotional activities that offer free downloads via hardware purchases or through purchasing other consumer goods.

The views expressed on currybetdotnet are my own, and do not reflect the views of my current or former employers.