iPhone and the blindness of the Apple fans

Well, it seemed churlish not to join in with virtually every other blog I read and not post something about the mobile phone / multimedia device you may have seen launched by Apple last week. I have to start by saying that I am intrigued by the user interface, and I'll be fascinated to hear about how people get on with it out in the wild. Rather than talk about the much-vaunted product itself, I wanted to look at a couple of aspects of the coverage that I found pretty depressing.

Apple, like Google, has a real brand halo. I've writen before about how the power of the Google brand is such that they manage to get the credit for finding things that other people have done, and Google was found to be people's favourite online brand in the UK last year. Worldwide, Apple must be one of the few brands that comes close to that status.

So it was the reaction to a couple of issues surrounding the "iPhone" that I found struck a wrong note with me. The first surrounds the accessibility of the product. The user interface itself is a break-through for phones in that it is almost entirely based on visual touch-screen interaction. This presents a real issue not just for potential users who are blind, but for users with poor eyesight, and also for people who suffer from mobility impairment.

Of course, the new Apple phone will not be the only phone on the market. However, it concerns me that for the sake of a whizzy touch-screen display, what has been hailed as a step-change in communication devices does away with the push button interface relied upon for tactile feedback by a large section of society. If the Apple "iPhone" is as big a success as fans predict, it naturally follows that the market will attempt to clone the device for a slice of the action (for evidence see the various iPod clones available).

A post the unofficial Apple weblog dared to suggest that the Apple "iPhone" did nothing for the blind. Erica Sadun posted that she hadn't seen much discussion and invited feedback:

So I googled for blind and iPhone, but didn't find much out there on Web search, and just a few hits here and there on blog search. Surely, there must be some usability experts out there willing to weigh in on the Universal Access aspects of the iPhone and the lack thereof. Thoughts? 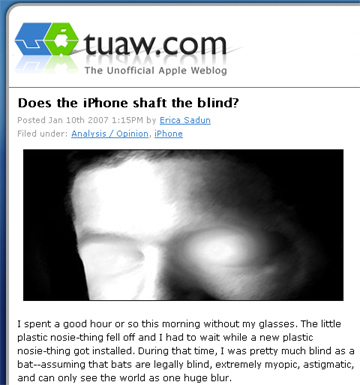 The sheer vitriol of a lot of the responses really took me aback - it was the kind of thing I would expect to see on a contentious BBC Have Your Say thread, or the message boards at the Daily Mail or The Guardian. This wasn't someone campaigning about the issue, this was a source of news specifically dedicated to Apple products attempting to raise the accessibility question. I've quoted some of the responses below.

coalxman: I hate to do it to you, but this is a DUMB blog, Why would the blind want this Phone as 90% of its function is visual.

Tim: If there's such a huge and desperate need for cutting edge phones for the blind, then someone can fill it and make a living doing so. Maybe it will pay better than lame blog entries.

Littlejoe: I dont mean to be an ass, but who cares?

Flash: I don't know if there is a tactful way to say this, but, is it really Apple's responsibility to make sure of this?

JClark: this is a premium device (both in cost and features), and if you can't use it, why would you want it?

in-steve-we-trust: you could slap on some sort of crappy peripheral in to the dock port, but that would be lame. anyway, what a shocker, a device is harder to use without being able to see.

So there you have it from the mouths of the Apple fans themselves - why should people who don't have 20/20 vision be able to afford or desire, or even just try-out, premium consumer products aimed at the voice communication market? I mean, why on earth would blind people be interested in technology anyway, and as Littlejoe says, "Who cares"?

In the next couple of days I'll also be looking at some of the reaction to the "iPhone" trademark dispute with Cisco.

Apple fans should be ignored. They're just embarrassing twats.

I'm one of those people who uses Apple stuff pretty exclusively but always a few years after it comes out (usually when my dad upgrades) so I always judge the new stuff with a sense of detachment.

What struck me about all this is that Apple themselves are only going for 1% of the market which for them would mean selling 10 million iPhones. I don't think they're going to do that but even if they do and allowing for the copycats there are still a hell of a lot of other phones out there. Also, this is a "smartphone" which is a bit of a niche in the market. The voice communication stuff isn't why people will buy it - the web browser and photo/video/music stuff is. It's primarily a visual device.

But yeah, shame about the morons.

We were talking about this at work today.

My take is that a.) Apple have been pretty good building access enhancements into OS X and iPhone is (apparently) running OS X and b.) the device hasn't even passed FCC approval yet to ensure it doesn't cook your brain so let's wait and see what the final product actually does.

Also, and this is pure geek fantasy, given a blind user wouldn't need to _see_ the touchscreen, Apple could provide a cover for the screen that gives more tactile feedback (like the studs on keyboards) and then just have it talk to you through the bluetooth headset as you stroke it appropriately.

A step change? Not really. I already own a mobile with touch screen dialling, that could do anything the iphone can and more. It doesn't have apple's funky interface, but you know what... I don't care. Apples have a history of promoting style over substance. Me? I'm staying in the queue for a Nokia N95...

Fortunately the community at TUAW at least partially policed itself; if you read all 60+ comments, the ratio of ass to civil runs about 7:5. As I pointed out there, cell phones, unlike MP3, make use of a precious public resource, the limited EM spectrum. As such, manufacturers are required by law to “provide at least one mode that does not require user vision” when “readily achievable”.

I agree that the comments on the TUAW sight are outrageous. First of all, for those wondering why Apple (and all other cellphone providers) must make their products accessible to blind/visually impaired users there is a simple answer: it is mandated by law. The 1996 Communications Act, established by the Federal Communications Commission, mandates that all cellphone companies make their products usable by the visually impaired if this is "readily achievable." I realize that this is somewhat of a vague guideline, however this does not change the reality of the situation. People who are ignorant enough to believe that companies are only required to do what is profitable would be well advised to visit fcc.gov. Perhaps then they will be able to make intelligent comments on a complex situation.