Video blogging isn't safe for work for me

Words are dead. The future lies instead in sound and pictures. And that's bad news for blogs like mine which rely on words. People can't be bothered to read words any more, not when they can be spoonfed moving images with an accompanying soundtrack instead. Could be a music video, could be a film trailer, could be a TV snippet, could be two spotty teenagers shouting into a webcam in their bedroom. Whatever the content, sitting back and soaking in a visual experience requires far less effort than having to decode a long string of written sentences. Words are dead.

These opening words from Diamond Geezer today filled my heart with dread.

I've spent the last few years haunted by the thought that at some point I'm going to reach the moment where I am so far ingrained in my ways that I won't be able to adapt to whatever is the next big thing - like, for example, how my parents made the transition from vinyl to CD, but the transition from CD to mp3 has been one step too far for them.

However, the thought that one of the most consistently entertaining blogs I read was about to go down the sound and vision route looked like it might be my feared tipping point.

YouTube et al are great for quick bursts of entertainment, but no good for me to browse blogs.

You see, I am only online at work, and at work I can get away with having two monitors on the go, one of which is usually filled with Firefox opened at my Bloglines subscription page, giving me a seemingly never-ending stream of blog posts and news. And since my work is all about usability and the media and digital music consumption, most of the time what I am reading is not just what I'm interested in, but also is relevant to my work, and mostly inconspicuous.

Watching YouTube clips in the office isn't inconspicuous though, as Diamond Geezer's experimental post proved. My boss to the right of me immediately heard the spluttering coughing emitting from my headphones and turned to observe me, whilst my colleague opposite noticed my fixed stare and said "What are you watching?". And that was just trying to watch a thirty second clip in the office. 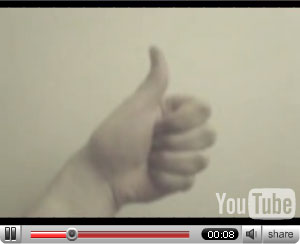 Luckily for me, Diamond Geezer's foray into audio and video is as as oblique as you'd expect - although I don't suppose he intended it to be considered Not Safe For Work in Austria.

Oops, sorry! It *was* a particularly loud cough, but I never intended it to be heard 1000 miles away. Don't worry, I won't be doing that again.

"The most important part of filming is getting good sound [...] The first thing to take account of is how loud people's voices are."