So you very nearly heard me on Radio 4 yesterday talking about the attempt by the New York Times to block UK readers from accessing a story published on their website about the recent terrorist arrests in my home town of Walthamstow - "best known for its faded greyhound track" as the article states. Sadly we couldn't get a good enough line on either of my phones out here in Greece to put me on air in the end. 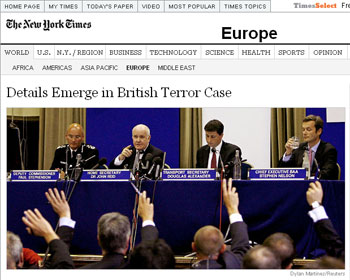 They were interested in talking to me not because of my E17 heritage of course, but because of my experience in working on the project at the BBC to make different international and domestic versions of the BBC's home, TV, radio and weather portal pages. I think they mostly wanted me to explain in layman's terms how such a thing could be technically possible, how easy it would be to circumvent it, and to compare it to the approach that the BBC takes.

The point I would have been making is that the two things have fundamentally a very different approach. When the BBC restricts content to UK only it is usually because of issues with third party rights holders like FIFA, and the only content the BBC generally restricts is streaming media. That means that whilst during the World Cup I could get someone from the UK to email me the score of a match that was being streamed live, but I still couldn't actually 'watch it'. The BBC also errs on the side of caution - it only serves the streams if it is sure the originating request is from an IP address used by one of the broadband service providers in the UK. The New York Times, it seems, is erring on the other side - it will serve the page in question unless it thinks you are in the UK. There clearly is more margin for error there - and even if their GeoIP system has an accuracy in the very high 90s percentage-wise, it still seems a risky policy to follow.

The type of content involved though is the big difference for me. You can't email a "stream" of a TV or radio programme to someone - but anyone outside of the UK can most certainly cut-and-paste the text of the article in question and email it to anyone in the UK. Or indeed use the site's own prominent "Email this to a friend" facility.

The question for me then is whether the New York Times has been irresponsible in publishing this information on the internet at all - and I think the answer is a close call, but probably yes. Putting the GeoIP block on users from the UK accessing the story directly may be enough for their lawyers to argue that they are not directly in contempt of court in the UK, but it has only served to make reading the article more interesting to UK readers. If the information continues to trickle into the UK public domain anyway via email, other websites republishing the article, and search engines, the New York Times will still have potentially compromised the UK's biggest terrorism trial for years.

Last time I spent a significant time abroad I had a friend set up a Realplayer friendly socks proxy in their office. I didn't want to miss out on the BBC's better streams. I access everything via VPN, so I appear from the same IP address regardless of where I actually am. But the VPN approach of hiding your location seems slower compared to a good proxy.

In the case of the NYT article I used Tor - http://tor.eff.org - and a SOCKs proxy. Then, while reading the comment's on Bruce Schneier's blog, I realised that mucking around with anonymous networks was a waste of time becuase the story had been posted elsewhere anyway. It took me three hours to get Tor working...

>> Then, while reading the comment's on Bruce Schneier's blog, I realised that mucking around with anonymous networks was a waste of time becuase the story had been posted elsewhere anyway. It took me three hours to get Tor working...

Aah, that'll be computers for you. Made to make your life easier apparently ;-)