Front Page at the British Library

Last week I had the opportunity to visit the British Library's exhibition on the history of newspapers - "Front Page". I have to say that being a geeky devotee of old media as well as new media, I thoroughly enjoyed it. If you've got any interest at all in the history of printed media in the UK, then it is well worth a visit. 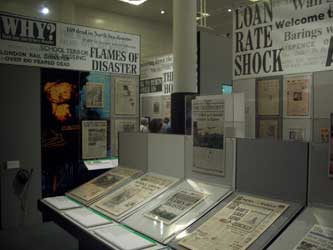 In many respects the choice of what went on the front pages of newspapers illustrates social changes in the UK as well. Take this 1968 story about the Mexico Olympics from The Evening News: 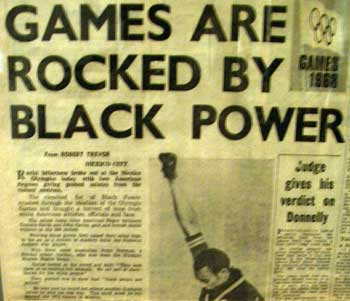 Throughout the article the two athletes are referred to as capitalised "American Negroes" as if they were a race apart, something that would not be editorially permissable today.

In another sporting example that shows the way our priorities have changed, the day after England won the World Cup in 1966 it was not the lead item on The Sunday Telegraph's front page. Instead the main story was about whether the Health Minister was going to resign over the issue of the pay rises promised to doctors and dentists. It is inconceivable that England could win the World Cup today, and it not be on the first fifteen pages of all of the national titles for weeks on end. Mind you, after that dismal showing in Germany, it is possibly just inconceivable that England could win the World Cup. Period.

One thing I increasingly have to get used to as I get older is that things that I remember happening during my lifetime now look old-fashioned. The newspapers I grew up with in the seventies and eighties, all black-and-white with blurry reproduced grayscale photographs, have more in common with the design of their counterparts from the early 1900s, than they do with the full colour re-sized newspapers we buy today.

Newspaper also have a pretty dodgy track record of predicting the future. The Evening News did well in 1922 when it predicted there would soon be a radiogram in every home: "Wireless sets for hire - as cheap as the telephone - new vision of home - concert-going at your own fireplace". The Express didn't do so well in 1938 when stating on the front page "There will be no war this year or next year either".

Whilst looking around the exhibition it struck me that whilst over the years journalists had been very successful in campaigning and shaping the world-view of the nation, they hadn't been able to do much to shape the received wisdom about the bitter labour disputes that rocked their own industry in the seventies and eighties. The viewpoint of the owners was all important. For example, one information board in the British Library simply reads "Throughout the next two decades, union activity was to reach a peak until the move by Rupert Murdoch's News International from Fleet Street to Wapping. This led the way for national titles to introduce new technology and reasonable staffing levels", as if it was just an absolute given that the union demands at the time of the Wapping dispute were unreasonable.

At the end of the exhibition there were some talking head looped videos of Murdoch, Richard Desmond et al giving their views on the future of newspapers - which mostly consisted of using analogies like "television didn't kill radio" and "cars didn't kill trains" to prove that the internet won't kill newspapers. Personally, I still think a combination of a viable electronic paper product and ubiquitous wifi might give them a shock in the future.

Quite a large area was given over to newspaper coverage of war and terrorism. Nothing seems to sell newspapers like death and destruction - a statistic on display stated that in the 16 days after the September 11th attacks in the USA, an extra 28 million newspapers were sold in the UK .

They also have a display of the four different editions of London's Evening Standard from the day of the London suicide bombings as the headlines changed during the day from "Gold Rush - Property prices in Games areas set to soar by 50%" to "Bombs on Tube kill Commuters" to "Terror Bombs Explode Across London" to the final edition's stark one word "Carnage".

The exhibits on war and terrorism also showed how things had changed over the century. Back in 1946 it was Jewish terrorists that The Daily Telegraph was unequivocally condemning:

Jewish terrorists shortly after noon to-day destroyed one wing of the huge Palestinian Government Secretariat and the H.Q. of the Palestine Army Command in the King David Hotel here. It is known that a time-bomb was planted in the basement. 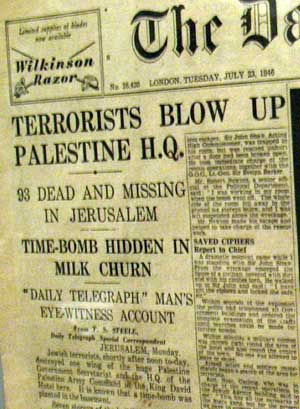 Further back, during the course of the First World War, the heavy hand of government censorship was less subtle than it is today. With government sensitivity about the details of the first air raids on civilian targets, The Daily News led with the frankly laughable:

Many Fires Reported, but These not Absolutely Connected with Airships

The exhibition also had originals of some absolutely classic newspaper headlines, including The Daily Mail's claim to name the Stephen Lawrence murderers, The Mirror's award winning exclusive picture of Ian Huntley in his cell, and The Sun's "Freddy Starr ate my hamster".

The exhibition also included The Sun's "Up Yours Delors" effort. Reading it now, it is astonishing that nobody attempted to prosecute the paper for inciting racial hatred - certainly I can't imagine it being acceptable in the UK to print this kind of vitriol against any other race and get away with it. Well, except perhaps about the Germans?

The Sun today calls on its patriotic family of readers to tell the feelthy French to FROG OFF!

They INSULT us, BURN our lambs, FLOOD our country with dodgy food and PLOT to abolish the dear old pound.

Now it's your turn to kick THEM in the Gauls

They BURNED alive British lambs earlier this year because they couldn't match our quality. They also:

Remember folks, it won't be long before the garlic-breathed bastilles will be here in droves once the Channel Tunnel is open

There's nothing like a spot of neighbourly love is there?

I think my all time favourite front page must be The Mirror's "The Filth & The Fury": 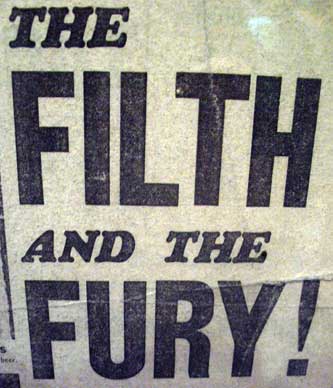 The Thames switchboard was flooded with protests.

Nearly 200 angry viewers telephoned the Mirror. One man was so furious that he kicked in the screen of his £380 colour TV

The thing I love about it is the mental image of a man being so annoyed by the mere sound of swear words on the TV that he was moved to destructive violence in his own home. I wonder what he makes of Big Brother these days?