Sometimes you might even want to deliberately subvert the audience need for a strategic business decision. A recent example on a project I worked on was the re-design of the BBC's TV portal at bbc.co.uk/tv. 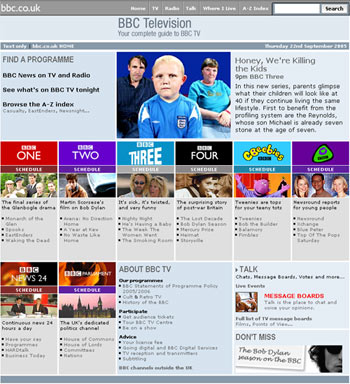 The previous iteration was a place which displayed all of the BBC's available UK TV stations, all billed equally. Users could click through on each channel to go directly to the listings for that day's programming, and it acted as an alternative hub to the TV listings on the BBC site at bbc.co.uk/whatson.

However, increasingly the BBC site is carrying large quantities of video content based around television programming, and in some cases, like recent comedy shows Nighty Night and The Mighty Boosh, had entire episodes available to stream online. The new strategic aim was to re-position bbc.co.uk/tv as a destination where you can watch TV on the web, as opposed to a destination where you can find out about what will be on your TV later that day.

Correspondingly the design of the page was changed to showcase one major programme at a time in a Flash driven animated promotional billboard, and additionally it carries links to around 18 video clips from the four main UK channels. 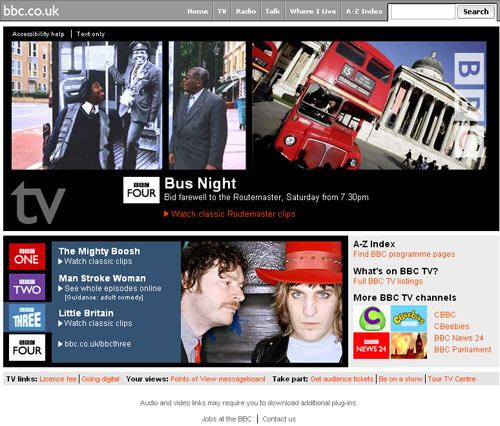 From feedback, and from looking at usage stats it was apparent that the audience coming to this page are still expecting to find their TV listings there, and haven't caught on yet to the new aims of the page. However, this is a clear case where the business need, of providing a place where you can watch TV on the web at an easily announced URL - bbc dot co dot uk forward slash tv - is strategically more important to the BBC than the audience need of finding their TV listings from that specific location.

The 'specific location' issue here is important, because what the BBC hasn't done is say that this particular audience need is no longer valid. Instead it has altered the navigational route through to the listings. The TV page itself still carries a link through to the listings (although not directly into a channel view) but additionally there is a new easier navigational path provided to the What's On listings direct from the BBC homepage itself. So it is hoped both the business and audience need can be met with an alternative solution to the one previously in place.

Continue to find out how about how the BBC site fulfills several different online business models, and to discover how it brands global BBC properties.

This article is based on Martin Belam's presentation "Understanding The Portal Concept Within A Federated Organisation" at the Ark Group's Gaining Online Advantage conference in London, October 2005