The 'Glue' of the future

I now want to talk a bit about what I see to be the glue of the future at the BBC.

I consider the things I have talked about so far, navigation, search and classification, to be the way that we currently glue together the many different parts of the BBC's output. However some of these things, for example maintaining a directory of best links, or keeping an A-Z index up-to-date, are very expensive and require a high-level of maintenance by trained staff to remain comprehensive. We've therefore been looking at some approaches that we might take to make this process easier for us.

One of the big initiatives the BBC has had online this year is a project called backstage.bbc.co.uk. It is a project that allows people to take the BBC's web content, and remix it, re-purpose it, and build new applications out of our existing services. The data is available in RSS feeds, in XML format, with plans for some applications to be accessed via an API. The BBC is also attempting to drive this development by setting up competitions, the most recent for example being a competition to make new applications using our existing TV schedule data , which was won by an application called mighTyV.

It has been fascinating to see the work of this volunteer outboard R&D department, as they keep producing prototypes that the BBC has not had the time or money to develop, or more importantly, not had the idea to develop.

These are now beginning to feedback into bbc.co.uk. One example of this is the BBC Home Archive. The project came out of the backstage.bbc.co.uk initiative, and was programmed by a very talented software engineer called Matthew Somerville.

It produces an archive of the BBC homepage. Every time we change what is on the BBC homepage his program captures the information - exactly what has changed, and when that change was. Additionally it takes a snapshot of the page, so you can view the BBC homepage as it would have been at that time. Suddenly we had a whole new way to navigate through our website, using time as a navigational tool. It was an information dimension that we had hitherto unexplored. 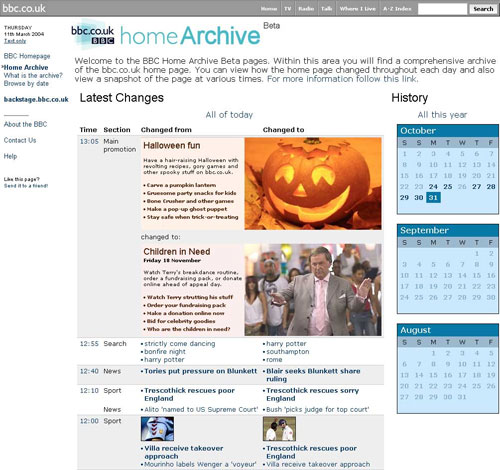 Previously if someone visited the bbc.co.uk homepage and thought "I saw something on the homepage last Wednesday, how do I find it again?", they had to use either search or browse as their navigational model. With the BBC Home Archive they can now navigate back to the exact homepage that they viewed, and follow the links that they saw at the time.

As I said, this is something that wasn't developed internally, it was something developed on a voluntary basis by an external developer, that we have now adopted.

Another prototype I'd like to look at is Headshift's BBC News tagging prototype. 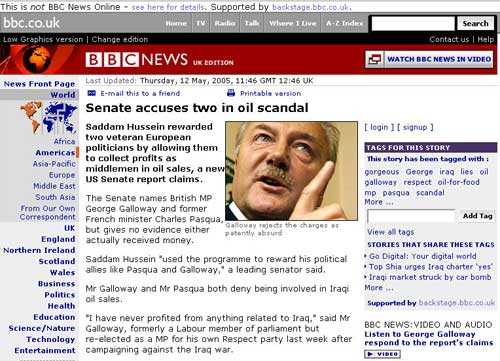 This takes the published stories on the BBC News site and then allows users to add tags to each story. You can see on the right-hand side of this page generated by this prototype that this particular story has been tagged with things like 'iraq', 'lies', and 'oil'.

Underneath those tags you can see that what this system does is build up an alternative navigation through the BBC News content, linking together other stories on the site that have been tagged with the same terms by users of this prototype.

I'm sure this prototype gave several of our journalists nightmares, as it takes the organised structural control they exercise over which stories appear where on which index out of their hands, and places a horizontal navigation tool firmly in the hands of the audience. Of course, were this to be something adopted on the BBC site, we would expect that only a fraction of the audience would actively participate in tagging the content, but the beauty of a system like this is that everybody benefits for the joining-up that the tagging does, regardless of whether they have contributed themselves.

One final thing I'd like to look at is a beta test taking place on bbc.co.uk. The BBC has message boards for over 40 different regions in England. (I should note that there are message boards for Scotland, Wales and Northern Ireland as well, but this particular beta trial is focussed on the English boards.)

Each area has its own board, but we often found that all across the country people would be discussing similar topics, so that in Bristol they might be complaining about the level of local Council taxation, and also in Cumbria, and also in Devon. These discussions however were taking place in their own regional silos, because if you were in Lancashire you went to the Lancashire board, if you were in Leeds you went to the Leeds board.

By now tagging these threads we are looking at way where we can hopefully take this content out of these regional silos, and aggregate them by topic. Hopefully when users come in to the service they can now opt either to join conversations from their local region, or they can opt to join in conversations they wouldn't have otherwise been exposed to because of geography, but are interested in because of the topic.

For me I think it is a very interesting shift of the editorial proposition of the boards, but I have to express two reservations. During the beta phase the tagging is not being done by the users themselves, but by the BBC's community team and the board hosts. It may mean that the conversations don't join up as naturally as they would if the users were in control of the feature, but equally from the BBC's point of view it means we don't have to additionally moderate tags for offensive content or troll behaviour. Secondly these message boards are not high volume in usage, and I wonder if they will achieve the critical mass of content to make the tagging truly useful to the audience.

These three 'future glue' initiatives I have looked at all expose potential future ways for the BBC to organise its content, either by using intrinsic metadata like time, or user-generated metadata like tags. They are all potentially ways to glue together the content so that it makes sense to the end user rather than making sense to the business.

I hope this has given you some insight into the complexities of pulling together a site with such broad and diverse content and content producers as bbc.co.uk, using the three key tools of navigation, search and classification, and also a glimpse into some of the tools we may be able to add to our 'glue' in the future.

This article is based on a transcript of a presentation by Martin Belam at IBERSID 2005 in Zaragoza.

If you liked this article, you might also be interested in:
A Day In The Life of BBCi Search
How Search Can Help You Understand Your Audience
Building an effective web presence in a large organisation