Concentrating on just Windows alone we can see that Microsoft have done a very thorough job of converting their user base to the most recent iteration of the software. Windows XP accounts for just under 70.5% of the Windows requests, and Windows 2000 a further 17.4%. That means in total around 88% of users of Microsoft Operating System products are using the two most recent consumer releases.

Windows 98 features in 7% of requests made from a computer running a version of Windows, and after that the figures are very small in terms of market share. In fact the next largest figures is a clump of 'Windows other' including Windows CE, and various unspecific Windows NT user-agents that I couldn't pin down to a precise version. 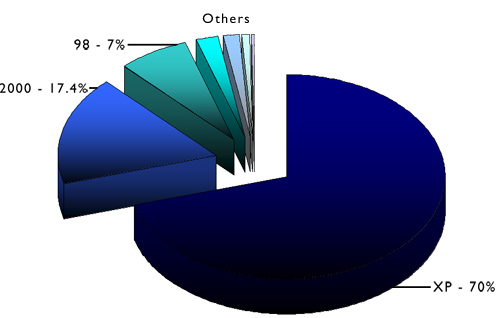 I was frustrated in my attempts to similarly breakdown the different versions of the Mac OS that people were using to request the BBC homepage. I established that from the requests we saw I could identify Panther as supplying 31%, Tiger supplying 21%, with Jaguar lagging behind at 3%. However there were 41% of requests where I could identify that the computer was a Mac, but not the specific version. That is because Safari helpfully supplies in the user agent string the WebKit build, allowing the precise version of the OS to be identified, but most other browsers do not.

Linux Requests To The BBC Homepage

The number of Linux requests to the BBC homepage was very small, representing only 0.41% - less than 100,000 - of the 32 million requests included in this study. With such a comparatively low number I didn't take the time to delve into which different distributions were driving the requests.

The figures may, however, mask a slightly higher use of Linux. Since the user agents generated are more likely to be unique, they are more likely to have fallen into the statistical long tail. However I should add that my random samples of the tail did not show that it consisted entirely of Linux, in fact as I mentioned earlier, a lot of corporate-branded Windows networks show up in the tail.

Continue to find out about the market share of the different browsers used to access the BBC homepage.