Most Haunted Live at Tower Bridge

So I'm currently watching Living TV's "Most Haunted Live", hoping for a glimpse of my wife in the background. Tonight's show is from her place of work, and one of her duties is being the film officer. This means she has to accompany crews around the building, checking they stay safe and keep to the terms of their contract. Which for Most Haunted means spending the evening lurking around in the dark hoping to hear strange noises. Staff there don't generally believe the building is haunted, although she did experience a couple of odd things when they were doing the initial recce to scope out the location, and visited some seldom used areas. 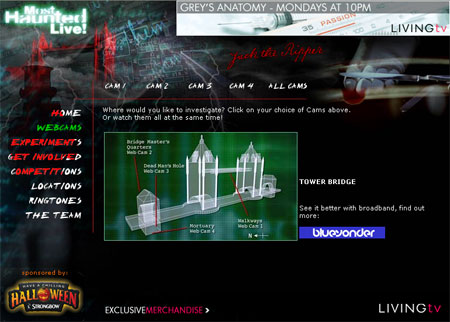 The wife has been really looking forward to it, it is the equivalent for her of someone telling me they were going to be filming Doctor Who in my bedroom.

Sadly though the gloss has been taken off of it a bit for her. Today The Mirror ran a story quoting one of the team, Ciaran O'Keeffe, exposing the extent to which the team allegedly manipulate the footage, use information supplied to them in secret, are less than honest about their locations, and generally use the "magic" of the idiot lantern to make things a lot more mysterious than they actually are.

Ciaran says: "Derek must have had prior knowledge of the locations."

He devised a plan to see if Derek was deliberately deceiving the public.

While on a shoot at Bodmin gaol he invented a long-dead South African jailer called Kreed Kafer - an anagram of Derek Faker.

"I wrote the name down and asked another member of the crew to mention it to Derek before filming.

"I honestly didn't think Derek would take the bait. But during the filming he actually got possessed by my fictional character!"

On the next shoot at Prideaux Place, Cornwall, Ciaran made up another fictional character, highwayman Rik Eedles - an anagram of Derek Lies. Sure enough, Derek made contact with the dead outlaw.

Ciaran says: "In my professional opinion we're not dealing with a genuine medium.

"When Derek is possessed he is doing it consciously - all we are seeing is showmanship and dramatics."

Ciaran went a step further at Craigievar Castle, near Aberdeen.

"I made up stories about Richard the Lionheart, a witch, and Richard's apparition appearing to walk through a wardrobe - the lion, the witch and the wardrobe!" True to form, Derek mentioned all Ciaran's stories - even though Richard I reigned 500 years BEFORE Craigievar Castle was built."

I don't know why The Mirror sounds so suprised - it's tv!

I don't care whether it's fake or not. It's the greatest thing on TV! Isn't it amazing what you can do with a loony, 3 miniDV cameras and Yvette Fielding!

have they ever put the dog alone and see what he does ?

can you go to a cematary ?

or a haunted hospital ?

At last derek has been exposed, bring on gordon cant wait

To say that i was a little shocked to hear ciaran O'keeffe's comments is an understatement. Would he be allowed to divulge information like that to the papers? I must say since i first started watching most haunted it has changed a great deal, where it was once a more factual show it's turned into entertainment now. All i can say is that Derek still rocks & i hope his new show gets off to a flying start. Good luck Derek!I will be watching your new show. I will still keep watching most haunted as it is a top show & hope the new spirit medium Gordon is as good for the show as what Derek was,i'm sure he will be. Finaly i would just like to say how good it was that Yvette introduced Paul O'Grady to the show,it was a masterstroke by her in my opinion. Paul was sensitive,serious & entertaining all rolled into one. Plese bring him back! I've thought of a good location for a most haunted live. What about the Tower of London?

hi! i love your shows i think its real i dont care what others think its what i think!
i wanna know if u can do one on a school abandoned that is?

I have known its fake for over a year. I am a member of http://www.badpsychics.co.uk and we actively campaign to make this kind of thing common knowledge.

Worth a peep on http://www.badpsychics.com

Actually this sort of thing is serious precisely BECAUSE lots of people not only are taken in by it, but actually sculpture their beliefs and lifestyles round mediums etc.. As a rule, folk just don't LOOK at the MASSIVE number of explanations for these 'phenomena'... subliminality, intuition, unconscious deduction ... not to mention projection, group hysteria and group suggestion, unrecognised hypnosis and downright fakery. Even if you buy into this, there are still Jung's 'collective unconscious', new ideas re space/time transcendental anomalies, exteriorized libido, projection of psychic contents ... and just plain fakery, or simple camera edits. Acorah IS ridiculous and his whole facial expression is tongue-in-cheek. Anyway, psyhic intuitives can't just 'switch it on and off' at will, even if they're genuine. And if you still BELIEVE in ghosts, you have to consider for example Egyptian cooncepts of the 'energic' versus 'eternal' soul. Too much for here. But it IS dangerous, because it affects how folk live. Fielding and hubby ... all very 'family' and suspect. Sleaze and sensationalism.

in what series did u do annesley hall?

how do i get 2 the webcams

the mirror article has been proved fake by yvette fielding and ciaran themselves. it is not real, and im supprised that you all thought it was.

Most Haunted is also one of the most entertaining shows on the tely. I think that anyone with eyes and half a brain can plainly see that Derek is a proper drama queen and that's about as far as it goes. He's entertaining to watch, but that's all. There are folks whom are highly sensitive and perhaps can pick up on energies, but they don't camp it up. (It's actually quite draining, but not ultra dramatic). Yvette herself has said that Derek is the one member of the crew that she finds scary. She has also said that she doesn't believe that she has any latent psychic or mediumship abilities herself. I got this info from an interview with her I read. I do however hear that off camera and in general that she is a really nice person as is most of the rest of the team I imagine.

Theres only one way to find out if this programme is for real, let the general public come on your show.

Oh dear, since my last posting the shows acting has reached a new low, on par to prisoner cell block H. Derrick give it up and stop acting up. The only thing that’s scary is your acting.

all the best for tonight team

I just wanted 2 say that I think the show is fab really love it they r the best team ciaran is my fave!