'There's enough comedy in advertising today,' says Jörgen Andersson. 'And jeans are not about laughs, jeans are love and soul and tears. That's what we're trying to emphasize with this tragic and beautiful Romeo & Juliet story.'

I went to see Serenity on Monday, and before I got to enjoy that I was assaulted by the seemingly endless Dave LaChapelle directed "advert" for H&M's &denim range. 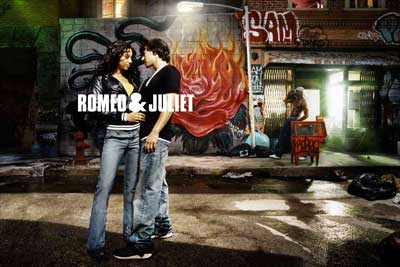 The reaction in the cinema was one of horror. There is a hideous moment in it where it appears to have drawn to a close and a fade, only to re-start for another three minutes. I ended up apologising for slating the advert shown before it, which would have been received like a warm hug from a long-lost friend if they had shown it a second time following this travesty. I'd link to the streaming web version of it but fortunately their marketing team have housed it in a full-screen Flash pop-up which I can't grab the URL of, so you are spared the misery.

When we recovered from our stunned state my wife turned to me and said:

I've forgotten what we are here to see.

The first quote in this post about comedy in advertising comes from the press release about the launch of the range and the 'short film' that accompanies it. A little digging around on the interweb reveals I wasn't the only person annoyed by it.

There appear to be two main points of contention. The first is that it uses images of gun crime to sell jeans to teenagers. The advert launched in Canada a couple of weeks ago, and marmalade.ca summed their objection up as:

H&M had the poor taste to use the gun violence as the method in which the lovers are killed (another thing: R&J committed suicide, they werent murdered, right?). Romeo is gunned down in a drive by shooting outside of Juliet's apartment. All the while Mary J Blige is singing about...well.. something. Who knows. Juliet, played by American Idol's Tamayra Gray runs outside and spends the next 5 minutes caterwauling and thrashing around in grief, while we see Romeo bleeding to death on the asphalt.

To put my horror in context for those of you not in Toronto, this is being aired at a time when almost daily we are hearing about 7 year olds being shot to death in their bed by stray bullets, of teenagers involved in gang wars, and of shooting deaths almost every single day. Toronto is NOT like American cities - before this summer, we didnt have a huge gun violence problem. But something has changed, and this is our new reality. So, I was disgusted with both H&M and Famous Players for their decision to glamourize gun culture in order to sell clothing.

H&M have 'withdrawn' the advert in Canada, or at least not re-booked it after gaining an initial burst of publicity. marmalade.ca wrote to complain and got the following response:

While it is important for us to continue to support artists that break new ground, see things differently and challenge the everyday norms, it is also important for H&M to listen and respond to public opinion. Therefore, after much consideration, it has been decided that this film will no longer run in Canada.

The second problem is the one that is my own complaint. It shows less social concern but revolves around the fact that I have paid to see the movie, and I expect a certain level of advertising and trailers from a trip to the cinema. What I don't expect is to pay to be subjected to a commercial masquerading as a mini-feature which effectively steals 10 minutes of my life that I can never reclaim. If it wasn't for the advertising buying of H&M last night I could have had 10 extra minutes chatting to my friends either before or after the show. It also put me into a mood and spoiled the build-up to the main feature.

Now there is an argument that all publicity is good publicity, and fair play, H&M now own the only own-store brand of ladies jeans that I could name. However if H&M think this is bringing them a valuable brand-building exercise I'll leave the last word to my wife, who said - note the use of the past tense:

I used to really love H&M. The were my favourite store.

Not any more she doesn't, and she said she won't shop there again

Now that has to be an unhappy ending much worse than the one dreamed up for Romeo and Juliet by H&M's advertising agency.

Thank you for this! I, too, went to see Serenity on Friday evening, only to have my ears and eyes assaulted for what felt like half an hour of Mary J. Blige warbling to a trash-flash extended advert. After it reached the three minute mark people starting openly laughing. There was applause when it was finally (finally!) over. I had suspected that it was intentionally overdone and funny (the bit where 'Juliet' started mouthing along to the lyrics had me in stitches), and so was interested to read all of this.

YOU LOT NEED TO GET A LIFE, ITS AN ADVERT 4GOD SAKE! I THINKS ITS MINT N SHOWS WHAT THE WORLD CAN REALLY BE LIKE! OPEN YOUR EYES ITS NOT ALL FLOWERS, RABBITS N RAINBOWS! n ta sound track is ace not 'warbly'!

oh n btw 'Julies mouthing along to the lyrics' was actually Tamyra Grey from american idol...get it right!

>> oh n btw 'Julies mouthing along to the lyrics' was actually Tamyra Grey from american idol...get it right!

Well, maybe we need to get a life, but perhaps you need to get a grip on the difference between a fictional character in an advert (i.e. Juliet) and the "actress" playing here i.e. Ms Grey?

i'm not an illiterate 14-year-old, but i enjoyed the ad. at first i was thinking, i thought this was supposed to be about clothing! the music just made the whole thing really powerful so i watched it again. it was directed by david lachappelle who puts a lot of poetry in his work. otherwise, it would have been another GAP ad.

My opinion is coming pretty late in the game but I just recently saw this ad. I can understand all points on the matter but what it comes down to is that it is JUST and ad and it's not the first of it's kind in relation to being a "Mini Feature". The ad itself was beautifully done and the vocals ad a powerful energy to the whole thing. It's a very good cross between the story of Romeo and Juliet as well as the West Side Story. BRAVO Mr. LaChapelle

Missing the point slightly - the priority is to assess whether the company's products are made ethically.