Behind The Scenes At Tower Bridge

Working at the BBC I take it for granted that I can occasionally show people around the studios at Television Centre, or into the Blue Peter garden, or to look around the home of the World Service. It is only when someone returns the favour that I remember how exciting that all can be. I got a chance to remind myself of that this weekend when my wife was able to take me and the in-laws behind the scenes at the Corporation of London and at Tower Bridge.

We first visited Guild Hall. Although I have seen it photographed, and I know my parents have attended functions there, I have never visited it myself before. It was great to see it when it wasn't dressed up for a function, so that the focus wasn't on the people or the place settings but on the architecture and decoration. The Guild Hall features some intricate stained glass work, statues dedicated to Nelson and Churchill, and some panels of army insignia. 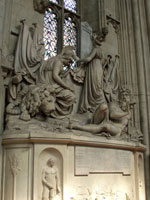 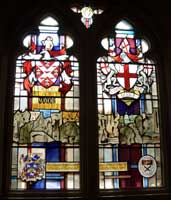 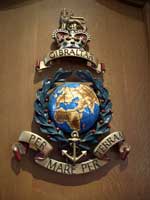 It also features some quite horrible statues at the entrance end, that look like incongruous gifts from an ancient colonial oriental benefactor. 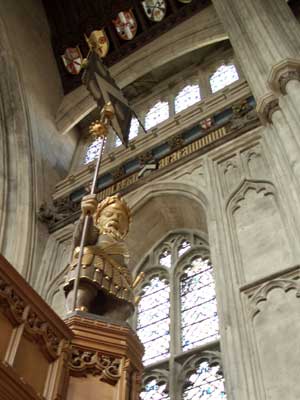 We then visited both Monuments (the tourist attraction and the pub). My wife told a funny story about how after the pub on the corner was renamed The Monument, the tourist attraction began to receive phone calls asking if it hired out the function room and whether it served food. "Well, it is rather small for a party" the staff would reply. We finished our day at Tower Bridge. Here we were invited into the North Control room where (very carefully supervised) my father-in-law performed a bridge lift, i.e. actually being the person in charge of raising and lowering the bridge. Rest assured all the vital bits of safety were carried out by the regular staff. 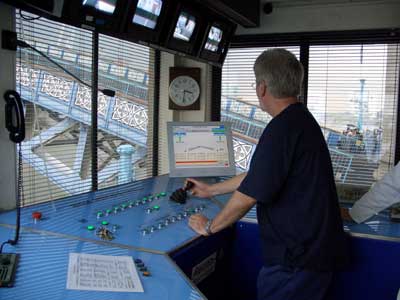 The rest of us were then able to stand outside the control room and wave at the barge that the bridge was opening for. 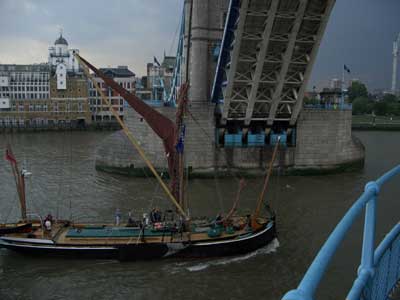 After that one of the technical team gave us a tour of parts of the south side of the bridge that are generally closed to the public. We started in the South Control Room, which retains the original brass instruments and lever systems that were used to control the bridge - plus a mannequin to illustrate how it all worked. This was much more romantic than the push button, joystick, CCTV and computer display of the modern system. 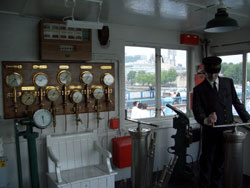 We then descended below the bridge, to see the original Victorian steam engines, and the somewhat uglier modern electric replacements.

The bridge had originally been built with multiple back-up systems, in an amazing feat of engineering. When it first opened the bridge was lifted around 6,000 times a year to facilitate delivery of goods and foodstuffs to the pool between Tower Bridge and London Bridge (compared to around 1,000 times a year today). It was vital that this supply was not disrupted, so the bridge was equipped with multiple engines, each of which were sufficient to life the bridge on their own if the others failed. As a further back-up a massive "hydraulic battery" was built, which used stored water to provide the power for a lift. 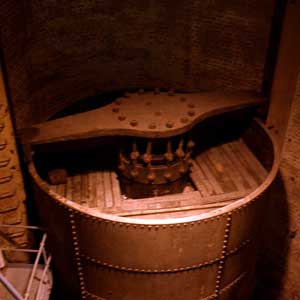 The modern system has almost as much redundancy built into it - if the bridge loses power supply from south of the river, it can instantly hook up to a supply from the north bank. If both of those fail, it has its own generators, although in truth if it broke today it would be chiefly Thames tourists cruisers who were inconvenienced rather than sparking disruption to cargo supplies.

Finally we were taken down into the bascule chambers, where the weights that balance the bridge swing down as it rises open. The scale, and ingenuity, of the engineering is amazing. The bridge locks shut with some pins that protrude from one side into the other, and when shut the whole structure is so brilliantly balanced that the bridge rests on a couple of pins that are tiny in comparison to the size of the roadway itself. 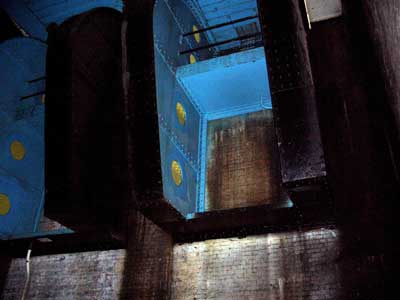 It certainly sounded like a good trip, with some nice photos too.