The Bike Shed at Walthamstow Central

So I think I've given up on my ambition to be cycling to work by the start of September - it is 22km each way, and apart from the physical issue of whether I can do it or not, I can't work out when I would either get to write currybetdotnet or drink beer. Plus there is the issue of whether I would actually have the energy left to do any work after a 22k cycle first thing in the morning.

I have though eradicated the bus from my commute, and now cycle from home to Walthamstow Central every morning - despite already having had one bike stolen from there.

I'm now using the rather hi-tech Bike Shed at the station, which uses a smartcard to open the doors on the structure, and the same card to assign you a parking bay. 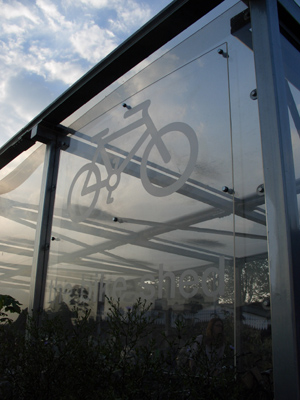 The construction itself is detailed on the sign outside:

The frame and base of the bike shed have been constructed from recycled railway track and sleepers. This has posed problems not experienced using new materials. Bending old railway tracks proved difficult due to years of pressure and most old sleepers are contaminated with creosate.

The sleepers used on the floor of this shed are Australian jarra - a hardwood which does not need to be treated. They were brought over from Australia about a century ago as ballast in ships and were widely used on the London Underground and the rail network generally. Due to risk of vandalism polycarbonate sheets were used instead of recycled glass on the sides and roof of the shed. The path is made out of old London stock bricks.

One problem with the system though is that it only takes one person to fail to do it properly, and it is broken for everyone. Some people attach their bikes to the electronic locks with their own lock, so the system still thinks the bay is unoccupied, and repeatedly offers that bay to subsequent users. I've been on the receiving end of this twice myself. Fortunately on the first occasion I was able to move the immobilised bike to a different bay. However the delay caused me to miss my train.

The control panel inside the shed carries a notice with the plaintive all-caps-shouty wail of:

THIS LOCKING SYSTEM IS WORKING PERFECTLY IN BELGIUM WHERE HUNDREDS OF BIKES ARE PARKED AT STATIONS. IT MUST BE POSSIBLE TO MAKE IT WORK HERE!

It has become such a problem that the shed now also contains a couple of non-electronic bike racks, so that if it fails there is still somewhere to attached you machine to, and I've already been forced to use them. 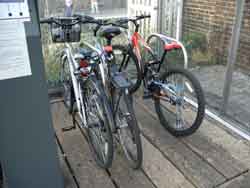 There are two ways to cure the problem. One would be to change human behaviour, the other would be to modify the software behaviour to use the third button on the control panel as an option to "Offer me another bay". 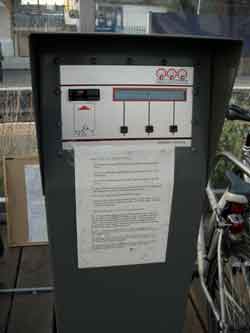 Aside from these odd human-induced glitches the system works well, and I feel that my bike is safe.

Well, as safe as a very portable re-sellable item can be in an unattended public space for nearly eight hours at a time.

Hi, Martin you are absolutely right. you had actually presented the true picture of the situation. my addition is just to make this shed more bigger and more cctv cameras directly link to council operator. Overall this is a good improvemnt and positive attitude towards cycling. any suggestion about any good bicycle shop near walthamstow? i want to buy a secondhand runaround bicycle to park at station.
cheers

Hi Martin,
I am looking to buy my first bike, same as what Tony said in his commentary. Any suggestion pf a good bicycle shop near or in Walthamstow?

Robin's Bikes on Forest Road near The Bell corner is idiosyncratic, but I've had a couple of bikes from there and no problems with them. Well, apart from getting one stolen of course, but that isn't really the shop's fault ;-)

Do you still cycle to work ?
22km each way are quite a tour. I cycle 14 km to work each day and i got used to it and i even miss it when i have to take the bus due to snow.

The situation with our bike racks at the main station is quite similar with yours.
its like there are 1000 bike racks for 5000 bikes.

At the moment I am not cycling anywhere because my bike just got stolen :-(

Did it get stolen from the walthamstow central bike shed? Also, another question about the shed... do you ever turn up to find that there are no spaces available for you to park your bike?

I haven't actually used the bike shed for years - it was back in 2005 I last used it regularly. When I'd been using my bike recently I was putting it on some racks on the other side of the station.