Ransom Note For A Dalek

This really put a smile on my face today - Wookey Hole has received a ransom note and the severed limb from a Dalek stolen earlier this week.

We are holding the Dalek captive and in isolation.

For the safety of the human race we have disarmed and removed its destructive mechanism.

We demand further instructions from the Doctor.

Guardians of the Planet Earth. 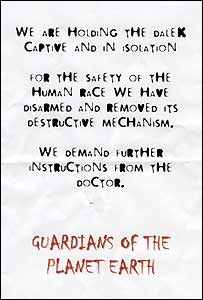 Well, I guess the people behind the theft need to see some kind of doctor anyway. Although maybe some of the staff at Wookey Hole do as well...

Wookey Hole manager Daniel Medley told BBC News: "The arm has been removed quite carefully, it hasn't been ripped off, there's no torture involved.

So if we get the rest of the Dalek back, we should be able to put it back together like a jigsaw.

The police think it was probably taken by kids or students, but there is also the idea that it could be heading to Edinburgh for the G8 protests."

It is all so inappropriate - during the 1970's Wookey Hole was used for location filming of the Tom Baker adventure "Revenge Of The Cybermen", the first Doctor Who story to be released on home VHS video way back in 1986. The Daleks shouldn't be anywhere near Wookey Hole - unless there is something about the new series we don't yet? (Or, maybe, fact fans, because they are holding a Doctor Who day to co-incide with the airing of 'The Parting Of The Ways')

The last word though must go to the diligent PC Neil Wolsteholme:

It is fair to say this is the most unusual theft I have been involved in investigating.

That just reminds me of a report on North West Tonight a few years ago, where they did a report on a garden gnome kidnapping (complete with ransom notes). Report - done by the most serious sounding reporter they had, and delivered completely pan-faced to the camera - featured an interview with a baffled sergent of Cheshire police, saying pretty much the same thing...