Earlier this year I spent a week in Malta and Gozo with my wife and a couple of our best friends.

The third day was quite overcast, and we headed out by bus to the "picturesque fishing village"TM of Marsaxlokk.

Our bus journey there was, shall we say, "interesting". We got the 427 which seemed to be the shorter route, but the bus then appeared to take the longer route of the 627. We also seemingly got lost in the one-way systems that permeate the suburbs of Valletta that stretch out from St Julians and Sliema in the west to Vittoriosa in the east. At one point the bus got completely stuck going forwards and had to execute an insanely difficult reversing manoeuvre. Vittoriosa, although we didn't get to stop off in it, looked an interesting, if sad place. It was the site of Malta's dockyards, but many of the buildings and warehouses by the shipyard seemed desolated and beaten-up. It suggested that at one time it had been magnificant, but the disrepair was tragic to see.

When we finally got to Marsaxlokk we headed straight to somewhere to have a coffee, and chose the Centru Laburista. It turned out to be an odd choice. Although only the front room was open, a trip to the toilets revealed that behind the scenes the place was the size of an air-hanger. Throughout it was filled with pictures of a Maltese president (I guess?) opening the place. Certainly it had been visited by high officialdom from the island. 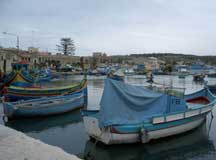 Sadly Marsaxlokk didn't look so picturesque in the clouded-over weather. The village has an open air market which mostly caters for tourists who want to buy salt'n'pepper pot sets of copulating pigs, so wasn't of great interest to us, although I did buy some handmade date rolls which were gorgeous. We stopped for lunch, and then headed to get the bus back, as these particular routes were mostly hourly and finsihed by 4pm.

In the evening we returned to the Ristorante Savini, just yards from our hotel, where we had enjoyed drinks the previous evening. This beautifully converted old farmhouse served without a doubt the best food we enjoyed all holiday. The service was also exquisite. Initially we were left to mull over our orders in the lounge where we had enjoyed a nightcap the previous day. I ordered the fresh fish of the day, which got presented to me before it was cooked (like tasting wine I have no knowledge of what I am supposed to do, say "Hmmm, don't fancy that one, the gills look too prominent / the dorsal fin looks crimped / those fish eyes are following me around the room" or something?). When it was cooked the chef then emerged from the kitchen with the fish, and filleted it in front of us at the table. His skill was awesome, and the end result was gorgeous. I wasn't so keen on the local fried cheese that I had for a starter, it was a goat's milk cheese which I hoped would be similar to feta or haloumi, but it was much sweeter, and I would say the best way to describe it was perfumed. I had to call in a bit of help from everyone in order to finish it off. Ristorante Savini is slightly out of the way, but I would whole-heartedly recommend anyone staying in the Qawra area of Malta to visit it. 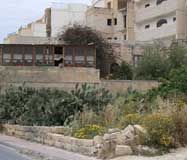 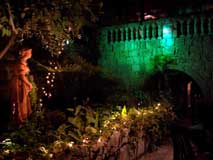 When are we going to see Doctor Who in Malta, I wonder...