A day on the District Line

Yesterday I took a day trip exploring the branches at the Western end of the District Line. Bits of the District Line form some of the oldest parts of the London Underground system, with steam-hauled services between South Kensington and Westminster starting as far back as December 1868.

The first branch I headed down was the Wimbledon branch. This allowed me to have a look at the South London Tram system, which I've not seen before, and then gradually make my way back up the branch towards Earls Court.

My first stop, East Putney, was chiefly notable for having a platform branded with lots of London Olympic Bid flags. Putney Bridge was next, which has what looks like the Underground's narrowest staircase - above the ticket hall a tiny staircase leads into the back offices. Getting off there gave me the opportunity to wander down by the side of the Thames, and then to cross the railway bridge on foot.

The next station I wanted to visit was West Brompton. This also gave me the chance to have lunch in the Cemetery there. It is noticeable for perhaps having the largest collection of tame and crazy squirrels in London, although as the photo below shows, if you can't see their cute bushy tails they do look just like rats. 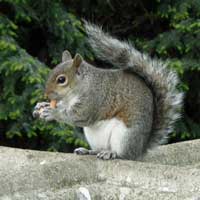 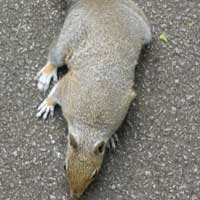 I then headed back to Earls Court, so that I could venture onto a different branch. Which is where the journey got very exciting, but went slightly wrong. No sooner had I pulled into Earls Court, but the District Line was shut down because someone was on the loose on the lines between Earls Court and High Street Kensington. The man was then spotted running along the tracks at the eastern end of the station, and a team of police and a guy from London Transport set off to chase him. 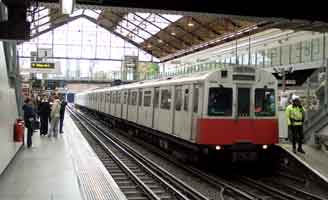 The trespasser is spotted from the platforms at Earls Court (honest, he looked a lot less like a blurry smudge in real life) 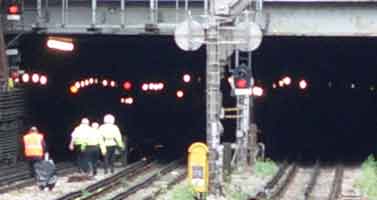 The current is off, and a search party of Police and an LT official set of in hot pursuit

Of course, no trip to Earls Court is complete without taking a picture of the TARDIS that is inexplicably parked outside the station, but with the service suspended my overall plans were in tatters.

In fact in the next hour-and-a-half I only managed to visit three stations, Ealing Common, Chiswick Park and Ravenscourt Park. Ealing Common is served by both the Piccadilly and the District Lines, but the Eastbound platform is currently closed due to refurbishment work, so I had to double-back on the Piccadilly Line, and then wait for ages for a District Line to travel back further than Acton Town. I was glad I got off at Chiswick Park, as although it looks very unimpressive at platform level, the ticket hall has a an absolute classic circular station design. 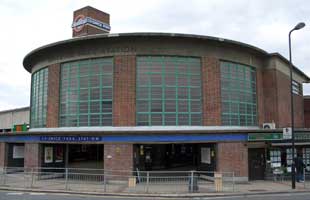 I was able to skip visiting Turnham Green or Stamford Brook, as I passed through them on the start and finish of our Ghost Walk through Chiswick, and at Ravenscourt Park I thought I'd take a break to allow the service to get back to normal. I found myself in the very pleasant beer garden of The Hampshire, although I was very surprised to find that in the middle of the afternoon with a client base existing of exactly me and two (other) old blokes, it was pumping out electro-clash. Very odd. I resumed my journey by heading down the Richmond branch, stopping at Kew Gardens and at Richmond itself.

My favourite things on the trip?

I still think Wimbledon needs a giant Womble on the end of the platform - preferably one with a large waving arm that goes "CLUNG!" when it goes down and screeches slightly when it goes up. I'm surprised they didn't think about it when they built the Tramlink.

If you had made it to Ealing Broadway (and assuming you ain't been there before) you'd have seen a large number of the original bullseye roudels on the District line platforms... Think there's about six of them if memory serves.

Prefer the East London line myself. Those platforms are just so small!

I figured I'd leave Ealing Broadway out since it is within striking distance of White City via the Central Line on a lunch hour - and because I would have had to spend time locating the place where the Auton's first invaded earth...

Wow! Autons in Ealing! That's a new one for me.

Knew about the Goodies filming in the park (and I'm sure they cycle down the road I used to live on at one point), Monty Python crawling down Uxbridge Road, Smack The Pony recording in the shoe shop, Dead Ringers using the shopping centre and claiming it was Hull, and of course the ultimate - the fact that for almost three years, almost all the McDonalds adverts were filmed in the area, but Autons! Cool!

And to think I've bought things from that Marks and Spencer too (it wouldn't have taken you long to find it - turn left out of the station then right ;)

Last post might have made me sound like a bit of a showoff, but I always loved living in Ealing with all that filming going on all the time - I used to walk past the vans parked up on Ealing Common on my way to the tube and being not just a computer geek, it was a bit like heaven!

Sadly all I get to see being filmed in South London is The Bill and random KFC adverts. Just not the same.

Wow, this is dull.