Most of the coverage on the BBC with the word "Asian" in it has been pretty bleak over the last week - but life goes on, and the BBC's Asian Network has this week launched a quest to find the most popular Asian film soundtracks of all time. 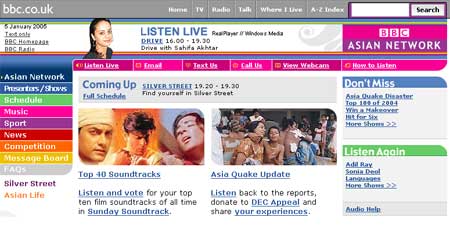 If, like me, you are not actually au fait with many, or indeed, any, of the soundtracks listed, the voting page allows you to listen to clips from each nomination.

It isn't the only music vote going this week. Rather more press inches have been generated by the Brits vote to find the best British song of the last 25 years - which has had plenty of coverage on Radio 2. Fortunately my team are not handling the voting for this award - as it has already generated controversy with Virgin Radio generating an equal amount of publicity with their alternative 25 list.