I'm looking forward to both The Telegraph and the Daily Mail tomorrow.

Violent protests are usually pretty clear cut from their point of view - the domain of left-wing agitators who stand against civilisation. Think the miners. Think the poll tax riots. Think of the sacrilege of a green mohican on Churchill's head. Think that every time violence erupts it is blamed on violent protesters not ill-treatment by the police, even if the police have illegally detained hundreds of innocent people for hours on end.

And the pro-hunt lobbey are good old traditionalists who simply want to find a way to pursue their chosen activity free from the interference of government.

So what possible editorial line can they hold tomorrow after today's pro-hunt protests broke into bloody violence followed by the storming of the Houses of Parliament? 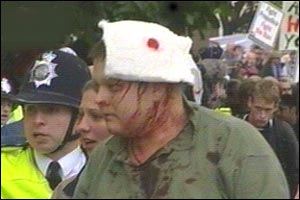 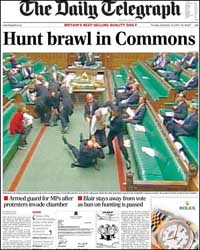 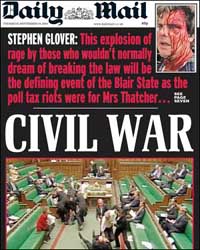 So, nicely understated from the Mail then.

Today's Telegraph editorial; "Arrogant Indifference to our liberties" is a 1000 word piece that doesn't even comment (or condemn) explicitly on the Commons incident at all except to conclude

yet at the same time concludes that...

"the patience of the some of the most law abiding people in the land cannot be taken for granted in the face of very bad laws."

"many people who hunt will in due course have to decide for themselves whether to ignore the ban and dare the government to enforce the unjust measure it is forcing into law."

Of course I think the most appropriate quote here is Norman Tebbitt from 1981:

"My father was unemployed in the 1930s and he did not riot. He got on his bike and looked for work"

15th October, 1981, to the Conservative Party Conference, Blackpool. Obviously unemployed huntsmen should stop rioting and clearly get off their horses and look for work. Surely ??

Mr Blair is a pathetic man who cannot stand up for himself. People will never stop hunting, its not just a hobby it is a way of life.

I live in Suffolk and I have grandparents who own a farm. It is very disturbing to think that the traditions that I have been brought up with and have enjoyed are soon going to disapear. I strongly oppose the ban on hunting.

First I have to say I was hysterical at the photo of our politicians brawling in the commons, you could just see them doing that in the white house? However when it comes to fox hunting, I think its ban is rediculous. People who have campaigned against it clearly have no concept of the damage foxes cause in the natural environment and I've no doubt that when their lethality becomes evident they'll soon be wasting more time and tax payers money trying to reverse the decision. Fox are vermin, they carry more disease than rats. The damage they cause to livestock seems to be irrelevent. Their fleas alone are a danger to society. (lets not forget the beubonic plague)The object of hunting is to keep their numbers down, not erdicate their existence outright altogether which is what the suggestion of a more humane way will cause. On a hunt, a fair percentage of foxes get away, if they are to be shot - they wont stand a fair chance, with guns it wont be long before they're on the verge of extinction. I fail to see how this is more humane? Hunting drives them back into the woods and countryside, the smell of hounds alone is often enough to make them keep their distance - wont be long before people are ranting about the damage they're causing and the disease they're spreading. They seem to forget - foxes carry rabies which could be quite easily spread when rats seep through the channel tunnel. I could explain more about the disease they cause but I think I've said enough to be going on with!

A horrible website going on about alot of rubish and wonders weather founder has ever seen a hunt?

Also i think you would be intrested to know that more moles are killed every year in stopping football pictches getting dug up than fox's are killed by hunting in a year yet labour aren't banning football!!

"A horrible website going on about alot of rubish and wonders weather founder has ever seen a hunt?"

"Also i think you would be intrested to know that more moles are killed every year in stopping football pictches getting dug up than fox's are killed by hunting in a year yet labour aren't banning football!!"

I agree, the governement isn't legislating against the culling of moles, but then again, the "great football pitch mole cull" alluded to isn't a social event spectator sport done for fun, is it?