It appears to be compulsory to write about press regulation in the run-up to the Leveson report being published. So here is my tuppence, hopefully before you get bored of the entire business.

The thing is, for me, this isn’t about phone-hacking, or David Cameron texting editors, or Murdoch. I’ve been writing that the PCC wasn’t fit for purpose on this blog for years.

Here is me in 2009 proposing six changes that would bring the organisation into the 21st century, and this is a case study I published of a failed complaint.

In that instance the Daily Mail wrote about a 13 year old girl who was distressed when her teacher said she looked like a slut. The Mail was then allowing the commenters on their website to call her a slut, but the PCC told me that since I wasn’t the girl in question, I wasn’t entitled to express the opinion that maybe this wasn’t quite the done thing.

The PCC complaints process was archaic. For example, if an article wasn’t online, they insisted you sent a hard copy of it alongside your complaint — effectively meaning that if you wanted to complain about something that had been published about you, you had to financially reward the publisher by purchasing it, in order to complain about it. Bonkers.

I thought Dan Hodges wrote a good piece on the topic for the Telegraph , rightly pointing out that everybody has an agenda here. I did think he was perhaps unjustified in disputing whether the PCC was a “discredited” body or not though. The PCC made an abject failure of investigating phone-hacking, and frankly, any system of self-regulation where two of our national newspapers can simply make their excuses and leave the club is clearly not working.

But just like Dan I’m certainly not keen on the idea of some kind of OFPRESS. I simply think the press showed a lamentable lack of imagination in re-inventing the PCC a good few years ago, when it was obvious that the internet and other technologies were transforming the publishing business around us.

There will be a lot of heat and bluster and speculation and cross words this week, but in the end, if you ask me, the existential danger to British newspapers isn’t coming from anything that Leveson can write.

It is coming in the shape of graphs like this. 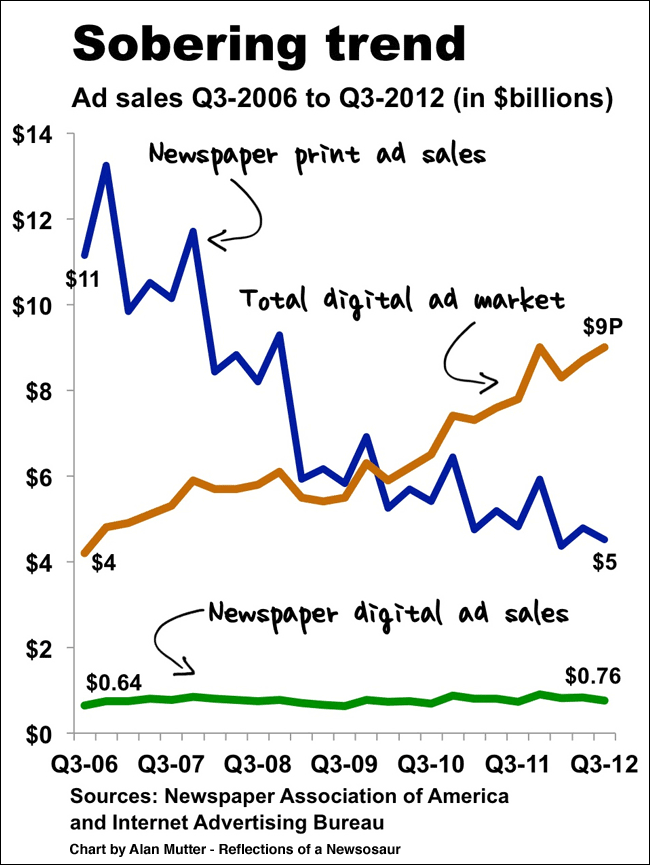 Chart of US newspaper ad revenue by Alan Mutter. [Source]