I always wanted bbc.co.uk to use CEEFAX page numbers

With the ultimate demise of CEEFAX due this week, I’m reminded that I was once a passionate advocate that BBC URLs should have a re-direct mapping from CEEFAX page numbers, so that bbc.co.uk/300 would go to the BBC Sport homepage, and bbc.co.uk/302 would be the football homepage. I figured that most people who had used a TV since the 80s already had a mental map of getting around BBC content in that manner. I also suggested that they could work as “short codes” in the search box.

Of course, some numbers would have been problematic. 606 and 999 were programme brands, and it would have been odd typing in bbc.co.uk/404 and getting a weather page when you might expect an error message.

But it would have at least followed the precedent that bbc.co.uk/159 is the BBC’s emergency page for staff, which was the same number on CEEFAX, the web, and on telephones within the BBC.

It was probably a bit too geeky to be taken seriously - and it was before the craze for skeuomorphic design would have allowed me to sell it as ironically “retro”. Mind you, I did once get a little way down the route of re-doing the CSS of this site so that it looked like pages from CEEFAX, and I suspect that DIMBLEBOT will keep that particular flag flying.

Red Button pages did end up with page numbers, although they had to jig about with them a bit because they had more pages to play with. Andrew Bowden explained it here.

There is a lovely piece about CEEFAX by Ian Westbrook from the BBC Sport website in 2004 - itself looking pre-historic in a BBC website template that has survived various redesigns.

The analogue switch-off this week will hopefully bring an end to sensational headlines about TV channels moving programmes to “digital ghettos” where nobody can see them - although I wouldn’t bet on that. But I think my favourite thing about CEEFAX involves usability expert Jakob Nielsen. In 2009 he wrote a piece saying that the BBC had the best headlines on the web. Whilst he name-checked CEEFAX as an influence, he was oblivious to the fact that they were using the same content production system, and that the brevity of the headlines he was praising was actually down to the maximum character count on the TV screen. 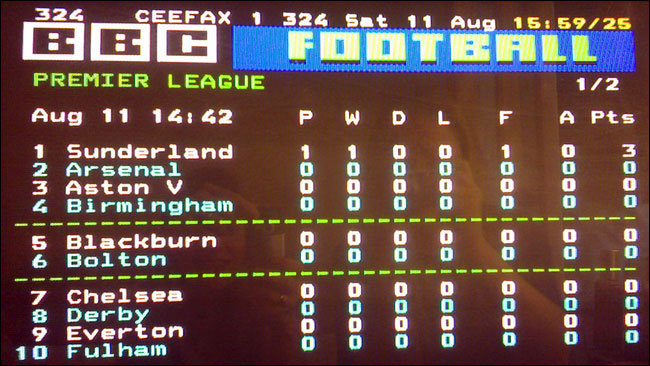 A picture of CEEFAX thanks to Mrs Logic

At the beginning of BBC News Online in 1997, a large proportion of the journalists working on it came from Ceefax, including Pete Clifton who went on to run it in later years.