There is a graph doing the rounds on the internet at the moment claiming that Amazon are giving independent publishers a raw deal over the cost of delivering books on Kindle devices. 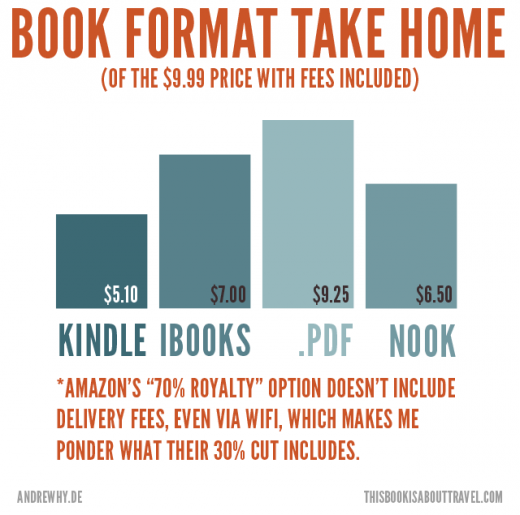 I must say I’m perplexed.

When you publish a book in the Kindle store, Amazon give you a very distinct choice of royalty rates: a flat rate of 35%, or a rate of up to 70% from which they subtract delivery charges, depending on the size of the book. The 70% rate has a higher minimum price. It is very clear in the user interface, and Amazon even calculates it and shows it to you up front.

The author or publisher needs to make a trade-off - with a big book you might yield more money by going for the flat rate option. Andrew’s graph is certainly dramatic, but I think it tells us more about the consequences of not choosing the right royalty rates for your books than anything about Amazon price-gouging authors.

When compiling a Kindle book yourself, if you are going to opt for the higher variable royalty rate, it pays to think about compressing your images and your HTML files to minimise the size of the book. I tweeted about this last night, and the couple of replies I got suggested that maybe this isn’t so obvious. Andrew Rhomberg from Jellybooks asked “but who reads T&Cs? It's like those ‘extra’ fees on Ryanair, pay only attention to headline fare”. Whilst it is true that most people file T&Cs under tl;dr, when you are entering a legal contract to publish a book is probably one of the times you ought to make an exception.

And of the big ebook stores, personally I’ve always found the iTunes conditions to be the more onerous - to the extent that although there are iBook editions of the titles I’ve edited and written for the Guardian, my own titles are Kindle only.

The problem with Andrew’s sensational figure of a “129,000% mark-up” is that it compares the raw cost of transmitting data, and doesn’t account for any service that Amazon has added. That isn’t just the store, or the device, or the 3G network deals they’ve struck, it is also the policing of the copyright within the Kindle store. I recently had to prove to Amazon that the content of my ebooks belonged to me, and hadn’t been ripped off from this blog by a third party without my consent. I liked the fact that they were detecting and querying that.

Overall though this story only serves to illustrate some of the complications of publishing ebooks on Amazon and other platforms. As with all industries moving from a tight analogue gate-keeping model to a more open and level digital playing field, there will be misunderstandings along the way.

Having published three books on the Kindle, I've always found Amazon's approach to be very transparent when it comes to royalties. The royalty calculator is a prime example. True, some of their documentation could be a little more user friendly - maybe offering some tips on how to reduce your delivery costs - but they're upfront and give you the options. Someone who is only looking at the headline percentages and ignoring the actual royalty figures, well to be honest I have little sympathy.