Last week it was time for another Hacks/Hackers London, featuring my Guardian colleagues Alex Graul & Alastair Dant talking about the Miso project, and Kaveh Memari talking about Renew. I’ve already published my notes from Alastair and Alex’s talk, and here are my notes about what Kaveh had to say...

Kaveh opened his talk by saying he’d tried to find the earliest design he had of Renew’s product, and put onscreen a scrappy little sketch of the devices that are gradually taking over the City of London. Renew’s business is to put screens on the side of recycling bins in the City - so far they have 50 or so in place, with many more to arrive. By the start of the London Olympics they expect to have around 200 units and a daily audience of 3 million, who will see the screens seven and eight times a day.

I always love stories of businesses having the courage to scrap something that isn’t working. In this case just a couple of days before launch they realised that they could avoid a huge amount of complexity - and admit they had wasted a load of time and money - by replacing the system they were developing with...a web browser showing a web page.

That also unlocked something else - if the screen on the bin could be showing something because it had a publicly accessible URL, then so could the screen in your pocket. A whole world of more interactivity could be unlocked. Already Renew have experimented with showing “the smallest version of a thing that could possibly be called a crossword” in partnership with The Times, and Kaveh said he dreamed of being able to take pictures of hundreds of people gathered around these screens, playing pong across the street.

This might seem all terribly hi-tech, but Kaveh argued that “putting screens in public places” is one of the oldest methods of society communicating - ever since the Rosetta Stone in fact. He cast some doubt, though, on the creativity of the people who had been looking to utilise the screens so far. You get ad agencies who want to trigger adverts for ice cream when it reaches a certain temperature outside, he said, “as if you haven’t already had enough advertising thrown at you on the tube”. Renew’s research shows that “banner blindness” equally applies to street furniture - people have basically been trained to avoid screens.

They’ve been thinking not so much about having a network of screens, but about having a “channel”. It isn’t televisions though. The people they have writing stories for them need to get the story across in less than a third of a tweet, and assume an audience attention span of two to four seconds. Kaveh said a great truth about product development - “it's very difficult to expect your users to do something different from what they always do.” In this case the usual pattern of behaviour they are trying to disrupt is walking past a bin on the way to somewhere, and paying it no attention whatsoever.

They think one route to innovating is to open up their API and inviting developers to play. They had a hackathon a few weeks ago, with, he said, “a parallel hackathon going on in our office to keep the API working”. Having an API, Memari said, stops them being a “bottle-neck on ideas”

Even if the idea is just being directed to somewhere much more interesting instead... 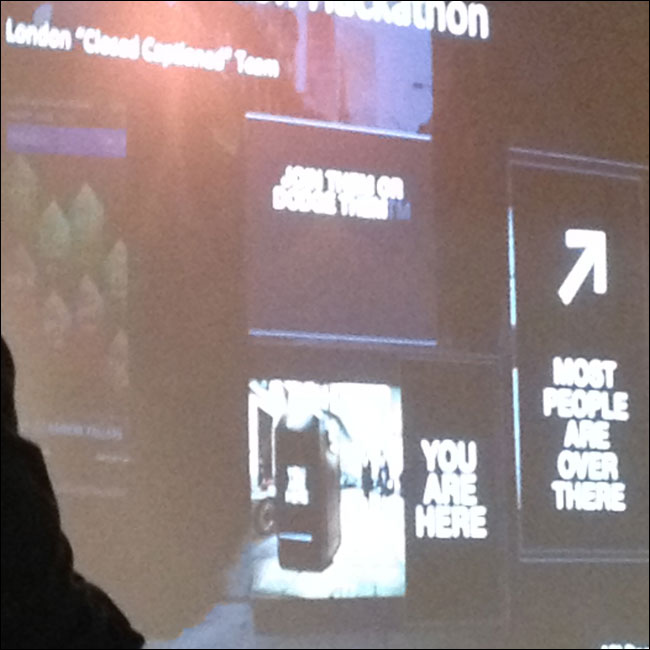 One potential use for the screens on the bins - directing people to somewhere more interesting (Photo: Mary Hamilton)

The next Hacks/Hackers London is scheduled for 27 June 2012.