I spotted an interesting blog post via Twitter this morning: “Guardian Shorts: The Guardian regurgitates articles on Kindle”, written by Jeroen Kraan on his “My Digital Newsroom” blog. On Twitter he described them as “Not really worth buying, but good effort”.

Reviewing the two titles released so far - “Phone Hacking: How the Guardian broke the story” and “9/11: Ten Years On” - Jeroen was more impressed with the latter than the former, which he found rather “dry”. The 9/11 book was lifted by “some of the fabulous writing that makes up its pages”, in particular the “sharp and moving” eyewitness accounts. He goes on to say:

“[T]he question remains why anyone would shell out their precious pounds to read a collection of articles that they could find for free with a bit of browsing around on the Guardian website. Unless you desperately want to take these stories to the beach, there seems no point in paying for the ebook.”

I think the point, though, is that the £2.29 charge for the books is not for the content - but because you don’t have to do a “bit of browsing around on the Guardian website”. The intention with the collections is that they form a curated digest of all of the best journalism the Guardian has published around a topic. The cover price is for the curation.

Plus, with the bundle of content on your Kindle, you get the ability to read offline on the plane or during a commute, the usefulness of which shouldn’t be underestimated if you spend a lot of time underground in London. This is a similar approach we have taken with our iPhone app - the content is available elsewhere free, but paying the subscription price means you get it optimised for that device, and you can read it offline.

“We should not, however, discount these attempts by the Guardian as pure folly. It’s commendable that the Guardian is willing to take risks and try out new ideas like this; done right, they could be a success.”

“The only way to develop that important new way of covering news online, that one way of achieving the most elusive of online achievements – actual profit – is to try repeatedly, and to brush yourself off with dignity after you’ve fallen.”

Experimentation is definitely in the forefront of our minds with the Guardian Shorts series. We expect to vary the length and cost of the books depending on subject area, and some of them will have more original content in than others. The list of titles that we have announced shows the range tackling a variety of topics which is much wider than the first two news-focused titles might suggest:

Anyway, at this point I should declare my vested interest in the Guardian Shorts project - as not only have I worked on it, but I am editing a couple of titles in the initial range. I’m tackling “The rise and rise of Facebook”, and regular readers of this blog should have no hesitation in picking out “Who’s who: The resurrection of the Doctor” as the other title. 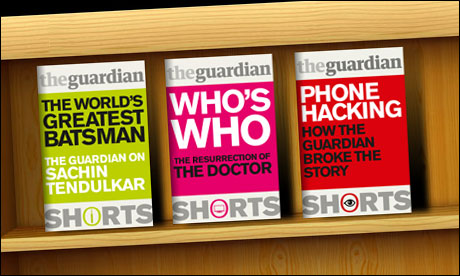 Jeroen’s blog looks new, but I am always encouraged to see journalism students thinking about their craft and practising their new media skills as they go along. One to add to the follow list.

Disclaimer: This is my personal blog. The views expressed on currybetdotnet are my own, and do not reflect the views of Guardian News and Media Limited, or any current or former employers or clients. Read my blogging principles

Read other recent posts about: Digital media, Media, The Guardian

The ebook shorts area is a pretty interesting one. I've just started a Sports Shorts series with a colleague. But there's a 'but'.

I see how taking material already created by Guardian staffers and re-selling it in a new format is a good idea – although there's an interesting discussion to be had over where this fits with the whole free access philosophy ;-) - and I get the argument about paying for curation and convenience. But surely the root of the sale is still the existence and quality of the content?

Let's say material from a freelance contributor was used in an ebook. I'd argue they deserve a cut of the proceeds for creating the content that people were prepared to buy. Is that factored into The Guardian's business model?

Hey, this is the aforementioned journalism student/blogger. Thanks for responding to my post!

First off, I agree with most of what you're saying: I don't disagree that curated content would be worth paying for, but I think some previously unpublished content would not only be a nice addition for paying customers, but would also make the ebook as a whole more readable. As it stands, the phone hacking short is a collection of very important journalism - perhaps the biggest British scoop of the year - and the articles themselves are factual and precise. I think everyone can appreciate the Guardian for pursuing this kind of investigative journalism, but the presentation of this collection is lacking. If the articles were somehow linked by an overarching piece about the reporting behind these articles, the struggles, the victories, the difficult decisions in the newsroom, it would make for a better (e)book.

Hi Martin, good point about freelance contributions, and possibly the inclusion of contributions of users. My understanding are that these are covered off by the usual "and re-use in perpetuity in whatsoever formats shall be invented herewith" type clauses in initial contracts. Certainly we wouldn't knowingly put material into them which wasn't "rights cleared"

I would always argue that any 'all rights' clause would command a commensurate payment, so presumably that's a part of Guardian contracts?

I'd have to refer the Right Hon Gentleman to our legal department at this point...sorry.

Sounds fair enough. If you do the honours it would be interesting to see the answer. Key issue and all that.

Any luck on those contracts, Martin? A few contacts I've spoken to seem to think a significant number of contracts at The Guardian don't include all rights clauses.