“Live: Someone is dead” - how CMS software can damage the news UX

I posted a screengrab to my Tumblr last night of the headline from The Times website which unfortunately managed to follow the formula “Live: Someone is dead”. 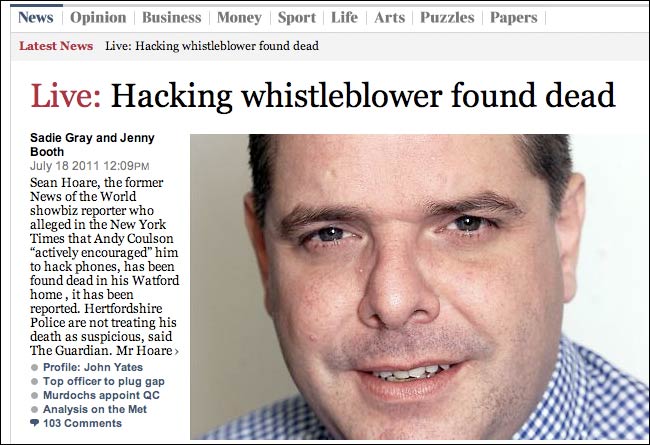 It is easy to just look at this as someone from the Guardian having a go at The Times, but it isn’t. And I’ve every sympathy this morning with the sysadmins at News International struggling to keep their sites up and running - there but for the grace of LulzSec...

I think last night’s headline is the perfect example of something that wouldn’t be allowed to happen in print, but which hits a magic Venn diagram intersection of technology, editorial and information architecture allowing it to happen digitally.

All of the decisions along the way look perfectly reasonable. Of course if a story is being covered “Live”, it makes sense to technically treat the opening “Live” on the headline with a different bit of CSS to make it stand-out. And of course, from a pure IA point of view, it makes sense to denote this content type with a kicker of “Live” automatically applied. And of course, if the “Live” bit is being applied automatically, from an editorial point of view you just write the headline to best convey the story, probably with a little hint of SEO in mind.

And none of those things are wrong as individual judgements, until you look at the overall user experience - where it ends up looking crass.

One of the biggest problems with designing the CMS for a news site is that, rightly, editorial staff want the maximum amount of flexibility within the tools, and to control the way that every bit of text appears. Every option on the front end, however, introduces a new set of switches and buttons on the back-end, inevitably increasing the complexity of the CMS interface and the software underpinning it. Nevertheless, examples like the one above shows why your templates need to allow maximum flexibility - in this case I’d want the ability to switch the “Live” to also be able to say “Breaking” or “Latest” or be dropped altogether.

Another common problem is that with a CMS, editors seldom edit on the page. Instead they put blobs of text into webforms, divorced from the overall context of how they will eventually appear. This is in marked contrast to being able to edit layout “on the page” as a traditional print production process allows, where a composition like the one above would be noticed much sooner.

I get your point but disagree. Sometimes editorial sensibilities are out of kilter with reader ones (perhaps because there is a tendency to respond to the fringe of readers who send grumpy letters, perhaps because you are so close to the words). I don't find 'live' offensive in the least, I understand the context. In this instance I'd push hard not to have that flexibility in a cms as the technical debt outweighs the benefit. But, of course, I'd probably lose the argument! ;)

Hi Steve, yes I might be being over-sensitive to it, but it was one of those headlines that made me instinctively wince when I saw it.

A benefit though of the rapid-fire world of online publishing, unlike print or even TV editing, is that when an insensitive or poorly planned headline comes out, it is easy to fix. Try doing that with a newspaper!

I think it's a wider point you've raised Martin, of at which point editorial checks go into the online news production process. As you say, the "live" word is most probably added in the back-end and not written by a journalist - and yes, if someone was to look at that headline in isolation they too would wince and change it. To have old-fashioned journalistic judgement and scrutiny built into modern, as-it-happens web news publishing would be ideal.

And on the live aspect of news - if a major site puts a story on its front page I am coming to assume that its coverage is being updated over time, especially sites like the Guardian, Times and NYT. As Steve says, I'm not particularly offended in this case, but did they even need to tell people the coverage is live?

This is a great example of the constraints of a CMS. However, all the ones I've used allow a journalist to preview before they publish - they should never publish 'blind' and correct errors once live. No matter how loud your editor is shouting!

All the decisions look perfectly reasonable? In the rapid-fire world of online writing, it is unlike print or even TV program editing. It is newspaper. Nothing is perfect in the world, so let's try to be more careful and kind.