Last Wednesday we held the latest of our London IA events. As ever it was curated and organised brilliantly by Matthew Solle, hosted by Sense Worldwide, and sponsored by Zebra People. I've already posted my handwritten notes from Relly Annett-Baker's talk - she banned the use of technology whilst speaking - and today I've got a rather more conventional blog post about Dan Lockton's talk.

Dan was talking about the way that designers conceptually understand users when making products. His premise was that even if it is unconscious, designers have a view of human behaviour that shapes their decisions. He felt that this falls into three broad categories - pinball, shortcut and thoughtful.

Pinball designs assume that users are basically stupid and need to be guided to desired outcomes. He gave examples of how this works in Government, where choices are designed out of the system. One example is banning British light bulbs to force us all to buy more eco-friendly bulbs that are part of an EU communist plot to destabilise Great Britain and murder us in our beds. Oh, sorry, I went all a bit Daily Express there, but you get the idea.

Shortcut designs are basically Krug's "Don't make me think" writ large. They accept that people are busy, and more interested in accomplishing the task at hand than in jumping through whatever hoops a business has set up. This type of design works with expectations of human behaviour, and Dan showed the example of a roadside rubbish bin with a big target painted on it. This accepts that people are going to throw trash out of car windows, but at least encourages them to aim it at the bin.

The final model was "thoughtful". Here Dan showed one of those signs you sometimes see on the continent where a road space has been redefined as primarily a social play area. This attempts to modify everybody's attitude to the strip of tarmac. Although I must confess the first time I saw one I had no idea what it meant - maybe I'm not as thoughtful as I think I am! 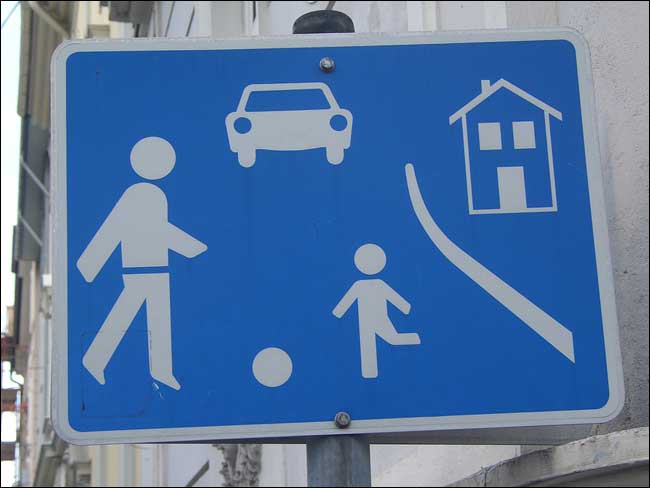 Dan finished by posing the question of how we as a group would try and influence British behaviour towards buying alcohol. As a bunch of UXers we all seemed to veer towards the thoughtful design models, with ideas like making bottles heavier according to the strength of the alcohol or standardising packaging around "unit" measures, rather than the brute force of price rises and making it difficult to buy.

Sadly my idea of a traffic light system indicating how attractive a person you were likely to end up with after a night of drinking a particular product seems unlikely to catch on.

You can watch the video of Dan's talk on Vimeo, thanks to The Sense Network: