One of the interesting aspects of this morning's BBC News redesign launch has been the proactive way the BBC has been flagging up the changes. Making significant alterations to a popular website always risks alienating some of the core users. As well as an advance blog post from Steve Herrmann, there has been a picture gallery of the new look with key features highlighted, and a trail running on the homepage for the last few days, warning that it was coming. Whilst I still think the interactive approach taken by the FT when they changed their homepage is the best I've seen a news organisation tackle selling a redesign to their audience, the BBC has made a significant effort here. 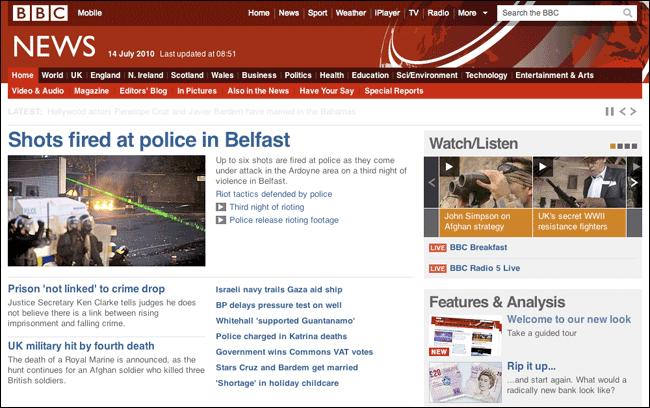 As well as Steve's posts about the redesign, there has also been a flurry of tangentially related blog posts from the BBC looking behind the scenes which have caught my eye over recent weeks. These have included Mat Hampson on their global client-side templates, John O'Donovan on the semantic data powering the recent World Cup site, and a fascinating post by Information Architect Sylwia Frankowska-Takhari on some of the user research behind the BBC's visual language.

Last time BBC News had a big facelift was in 2008, and I had the luxury of enough time to do a manual analysis of 600+ comments on the blog post accompanying the changes. That revealed that 60% were unhappy.

This time around the major gripes look to be shaping up as:

What is fascinating is being able to watch this feedback come in to the BBC in real time.

Already today I've spotted my ex-colleague Jem tweeting that feedback on Twitter seems to be about 50/50 so far. When you think about it, that means the gap between launch, and someone at the BBC making a public (if semi-personal) assessment of what that feedback has been like is down to a couple of hours. The days when to get audience feedback on a Dalek themed homepage meant setting up a special page and email address and wading through closed private correspondence may only be 5 years ago, but it seem positively prehistoric in 'Internet years'.

As we discovered at The Guardian last year with the successful launch of our iPhone app, and this year with the somewhat-less-successful launch of redesigned crosswords, this real time feedback loop is speeding up the product development lifecycle. It becomes an important skill to pick out from that avalanche of instant feedback what are real issues that need to be addressed quickly, and what is just 'the shock of the new'.

Still, despite all the effort to flag it up in advance, if I'd been at the BBC today, I'd have been tempted to run an office sweepstake on the number of times the phrase "If it ain't broke..." cropped up in the comments on Steve Herrmann's blog post and the #bbcnewssite hashtag.

I'm surprised they have the cash for it.

I agree with the person above. How much did the face lift cost in 2008 and now 2 years on they are spending more money. How about spending more money on programming. we are now seeing repeats of programs less than 24 hours after they have aired.

"Your chosen video format doesn't work on the closed proprietary device I recently bought from Steve Jobs. Therefore your choice is wrong." is a little harsh - Apple's devices may be closed and proprietary, but the browser is pretty open and standards-compliant.

...but you knew that already, right? And I just walked into your troll-baiting trap...

I hate your new design. Will start looking elsewhere for currybet blog posts.

So fast that the only update the iPhone app's had in six months was an emergency bugfix, despite promises at it's launch of rapid updates to fix all the issues it has (OBO doesn't work, story updates are often 3+ days behind the website, no comments, Media section completely missing from shortcuts etc etc)?

I'll grant you the Guardian's app has sold well, but it seems to me to be a great example of how putting a trusted brand on an app store app means it'll shift, irrespective of if it's any good or not...

Well, the app has accumulated over 3,500 5 star ratings from users. That's 64% of the people who have rated it giving it 5 stars, and it averages a 4 star rating overall. We must be getting something right Phazer.

Well, if you've continued monitoring the feedback in real time, you probably haven't had much sleep in the last ten days. So far, in almost 4,000 blog comments on the BBC's Editors blog, there have been about 6 in favour of the redesign, with all the rest extremely critical. Sure, there are always people who hate change and will protest at everything, but there have been numerous well-argued and specific criticisms, from both web designers and ordinary users alike, about the fonts, the random layout, the need for massive scrolling, the replacement of useful links with irrelevant material, technical problems across numerous browsers and operating systems, and the imposition of blank space on the UK site where ads appear in the US edition.

And to all of this criticism, the BBC has turned a blank ear (or eye), with Steve Herrmann (who I understand is an ex-colleague of yours) taking the line that "we know best and you users know nothing" - at least in his blog postings. Far from representing a "significant effort" by the BBC to engage with its audience, it looks more like a massive PR cock-up, with the Corporation appearing arrogant, unwilling to listen and in denial about the significant mistakes it's made in imposing a redesign without testing it properly.

What is worse is the fact that "the powers that 'be'" don't seem to listen to adverse comments. "WE know better".

Of the many thousands who have now written to comment about the style, font, layout, facilities, content "look", "feel",

(have I included everything?)

only a microscopically small number were in favour of the new 'style'.

The overwhelming majority of (what seem to be well-educated, well-informed and reasonably representative) posters wrote in considered terms saying that it is dreadful.

It is so WHITE! the fonts are all wrong. It doesn't FEEL right.
It doesn't LOOK right.

You are scrolling all over the place for hours to find that which was 'there' with the old design.

Personally, whereas once, in far-off days, (when the BBC WAS the BBC), I used the BBC News site (fully customised to my liking) I now use

According to the research I have done, the number of 'hits' to the BBC site has dropped dramatically. The expression "Cliff-edge" has been used.

I hope that The BBC Trust, OFCOM, are all reading these messages.

Remember humans use the Websites, not software-writers who admire the way codes are written.

"Your chosen video format doesn't work on the closed proprietary device I recently bought from Steve Jobs. Therefore your choice is wrong."

So who is wrong. Does closed proprietary mean you needed to pay a licencing fee of sorts? The IPhone is massive, you'd think the BBC would have made all efforts to be compatible.

We have a nice fix to the awful BBC news website, it requires Firefox, greasemonkey and the following script. It makes the 'monstrous' carbuncle of the new BBC news website look like the previous incarnation with a nice side menu bar, verdana font and it removes all the recent accretions. The greasemonkey script can be found here: http://userscripts.org/scripts/show/87428

First of all - I don't like it. In my opinion - all the fonts are awfull. And I have problems with this site when using chrome.