Yesterday we published on guardian.co.uk an incredibly complex interactive to calculate the carbon output of the UK. It gives the reader the opportunity to be virtual PM, and to set policies to try to bring our emissions down to the levels we are promising too. It has been a huge amount of hard work crunching spreadsheets and fuzzling XML files, and my colleague Mairead O'Connor has written a blog post about the methodology behind the tool. 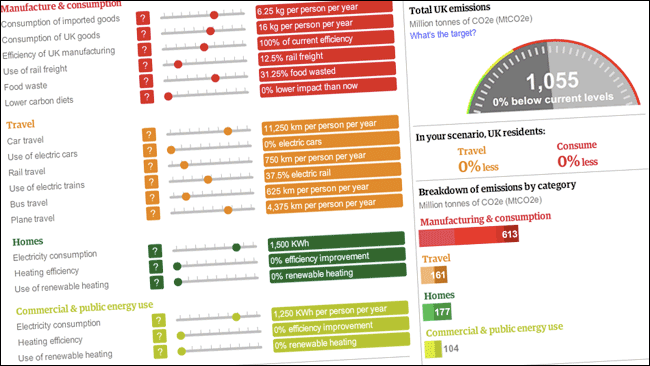 What I particularly like is that it isn't just an interactive where you slide some sliders and twiddle some knobs. It has a story to tell. As you use it, you begin to realise that no political party is going to be able to meet the UK's carbon emission reduction targets without pursuing some policy decisions that will be very unpopular.

Given that we are in the middle of the election campaign, our environment team also got the three main parties to use the tool, and to say how their policy proposals mapped onto it. Actually, the Liberal Democrats and Labour used the tool, but Greg Clark for Conservatives wrote his piece without displaying the results he got. And sometimes the comments below the line on newspaper articles are worth their weight in gold, with contributions like:

"Nice ideas about funding insulation etc, but by refusing to use the calculator we're left with no idea of how much effect your plans will have."

"Interesting that he didn't want to mimic Conservative policy on the calculator, instead choosing to obfuscate their position by boring us to death."

As we always try to do, the source data has been released.

Still, I think the thing that really sold me on it was that when I bookmarked it on Delicious yesterday for my link round-up, one of the suggested tags was already 'geek'.

Read other recent posts about: Digital media, Politics, The Guardian

The Church of Climatology hard at work again ...

I have to say that, generally speaking, I have always been pretty conservative. However, on this issue, I think the facts have been so incredibly clouded as to what is truth and what is not that none of us in the general public know what to believe anymore.

I think conservatives and liberals alike want to live in a clean world, but whether or not something needs to be done now or put off until it's too late seems to be the issue. My question is... does it matter? If we CAN live more "clean and green", and can do so without screwing up what little finances we have left, shouldn't we do so?

To me, it's kind of like owning a home that you know you're going to give your child one day. Am I going to just live in the house and do no maintenance because I know my kid is going to have it someday, or am I going to maintain it well so that they can be proud of what I left them, and they can live with the peace of knowing they have that safety and sense of peace and financial security in the knowledge that they won't ever lose their home. I don't know about anyone else (I really don't anymore), but as for me, I want the place I leave for my kids to be as clean and wholesome as it can be.

Just my two cents worth...