Last week we held another of our London IA evenings, with a series of talks looking at innovation and creativity. The night was sponsored by Zebra People and Lab49, and kindly hosted by The Team. Yesterday I blogged my notes from Richard Rutter's talk about web typography, and next week I'll have posts about the presentations from Claire Rowland and Andy Budd. Today I wanted to write about the evening's second talk, by Glenn Jones from Madgex. 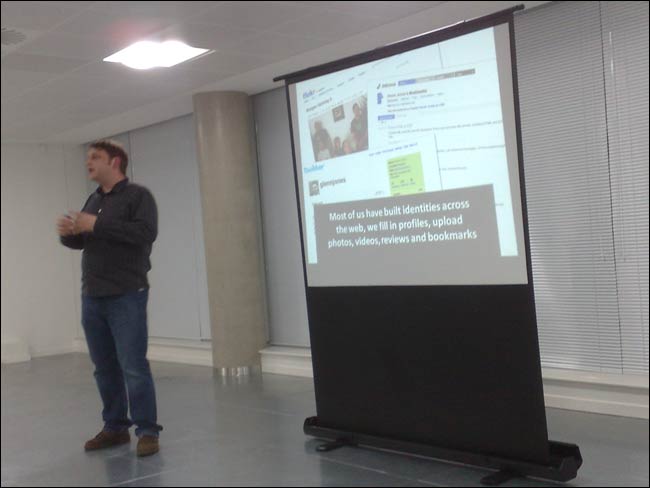 "Re-using data people have left around the web" - Glenn Jones

Despite the title, Glenn wasn't presenting a phishing manual, but instead looking at how our fragmented digital identities can be tied together to save us time. Most of the people in the room at an event like London IA have personal profiles across many different digital services, and a lot of these collect lists of our 'friends' or 'contacts' in a series of 'relationship links'.

Glenn argued that the icon driven 'find me elsewhere on the web' design pattern was now well established, as typified by Tim Van Damme. 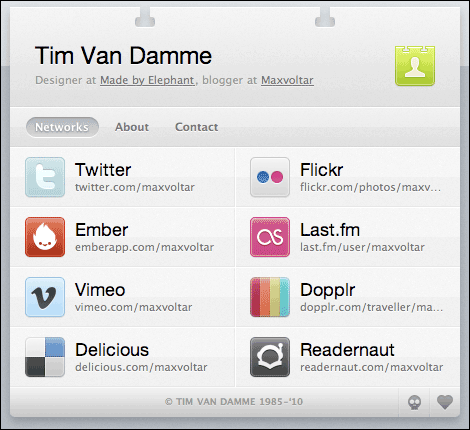 Some of these services use microformats like 'rel=me' to help machines read this data. A significant development in this area was the release of the Google Social Graph API created by Brad Fitzpatrick, which parses public social data out of Google's web index. 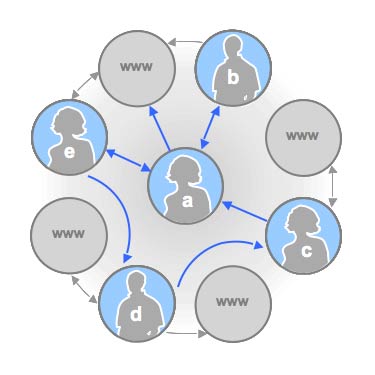 Glenn has used this to create Ident Engine, a software library that allows users to obtain aggregate data about a person from just one entry point into their personal social graph - for example their email address or their Twitter profile URL.

Glenn Jones thinks a future application of this could be a way of pre-filling registration forms. From just one already established web identity, the information to set up a new profile can be gathered using simple protocols like HTML and RSS. Another emerging idea - Webfinger - which allows people to retrieve metadata about a person by using their email address, adds another potential layer of data into the mix.

Personally, I already found it quite useful in spotting where my Internet profiles are out of synch. 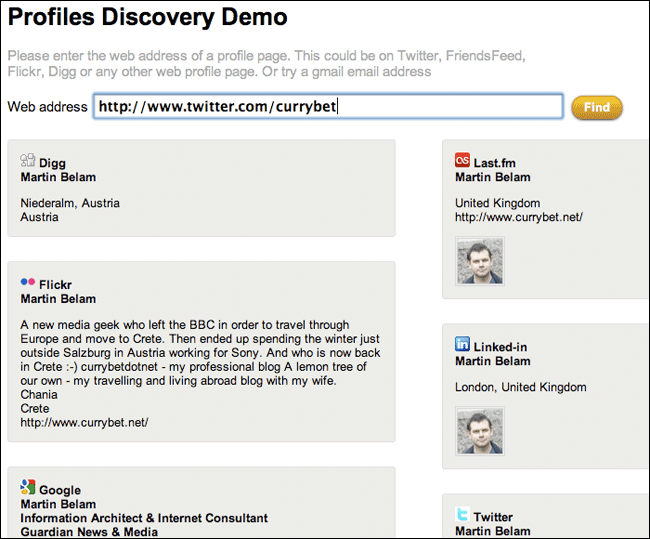 Getting the user experience right for this will be tricky. During the questions after his talk, Glenn said that the more he observes people use the Internet in testing sessions, 'the more it scares him'. He felt that very few 'normal users' understood the implications of the data they were posting onto the web, and how widely available their personal data was. Presenting a lot of information about someone that appears to have been discovered by stealth is a risky proposition.

Glenn wrote about his project last year in an article for A List Apart entitled "Discovering magic", and you can view his London IA slides on Slideshare:

The third presentation at the recent London IA evening was Claire Rowland talking about the "Psychology Of Creativity", and I'll have notes about that next week.

You might also be interested in the next event for UX/IA people in London that I'll be taking part in, which is on Tuesday 13th April entitled "Content Strategy, Manhattan Style". Before then, this Sunday 11th April I'll be talking myself at the Edinburgh Science Festival as part of a panel looking at "Journalism in the digital age"

Hmmm... I'm kind of torn about this kind of thing.

Sure, on the one hand, I can see the advantages: saving time by not having to input the information manually; being able to update profiles quickly and effectively; even finding out how much of a presence you have on the web.

On the other hand, it would make it almost pathetically easy to track someone down, and facilitate attempts to steal digital information - chances are, one of the linked sites would be hackable.

I think that, like it or not, this is where the future is leading. I just hope there will be some kind of moderation involved (what can I say, I'm an optimist!) and that things won't get out of hand.

I think that this will become more and more relevant as Google start to use the microformats to bring in summary data. I look forward to the advances and how this will affect the information that is available within the browser.

Agree, the microformats in the summary format data will become more and more important. As Google goes, so goes the flock. As this seems to be where the future is taking us, moderation will be extreemly important.