"Thierry Henry and the net" piece on Guardian PDA blog

Having gone on and on and on about comments on The Guardian site this week, I was a little bit nervous what might happen 'below the line' on a piece I wrote for the PDA Blog yesterday: "Thierry Henry and the net: Fifa report whitewash and anger on Twitter". 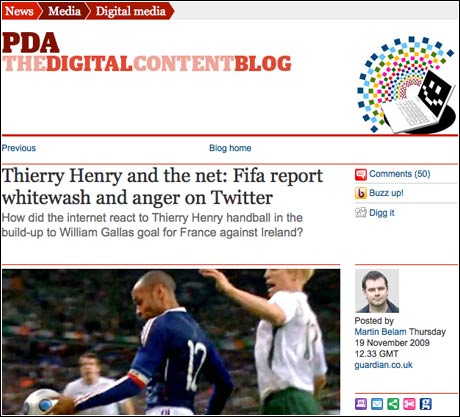 In the end I seem to have got away with just a couple of comments along the lines of 'Journalist gets paid to write article that claims people discuss current affairs on Twitter. In other news: Pope still Catholic', which seemed pretty good going.

Rather than focus on Twitter, what actually got me interested in how the play-off story had panned out online was the fact that FIFA's "official" coverage of the game was so bland and inoffensive that from their matchcast and initial reports, you wouldn't have even known there was anything controversial about the goal.

It worries me a little that we may be heading in the direction where internet reporting rights on sporting events are restricted. As I said in a comment reply on the PDA piece:

"There is a school of thought that says direct communication from clubs and players to fans, and closer control of internet broadcast and reporting rights, will do away with the need for a lot of specialised sports journalism. We might end up with something rather more like minute-by-minute PR puffs than the instant outraged reaction you got from Barry Glendenning on Wednesday."

During the course of the article I looked at the coverage on sites including FIFA, the FFF, the FAI, Le Monde and the Wikipedia edit war that erupted. Here are some of the screenshots that I took illustrating the points I made. 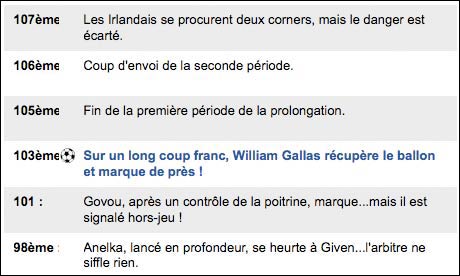 Live text from the FFF does not mention Henry 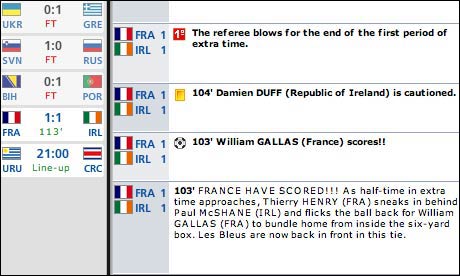 FIFA's matchcast carries no hint there has been controversy 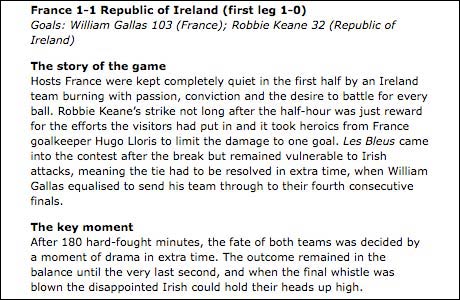 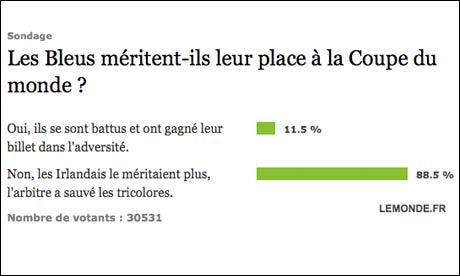 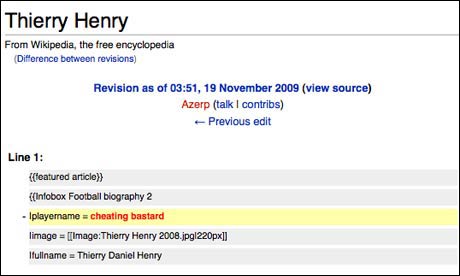 One 'diff' from the Thierry Henry Wikipedia edit war

I can really see it coming you know. With print press going down, I think there will be a push for pay-to-play online. Maybe we'll have to pay more than just hosting fees and domains fees just to have our blogs.

All I can say is "I have him since he played for Arsenal". He always look cheaty, like shooting freekick when goalkeeper not ready. I think FIFA should ban him for 3 matches.

I don't know you guys, but I think he is a good player, he is fast and always know great timing.
Maybe this is just one of great timing he found :)

For me, as long as he didn't do it for a purpose, it's okay. It's not cheating, I believe